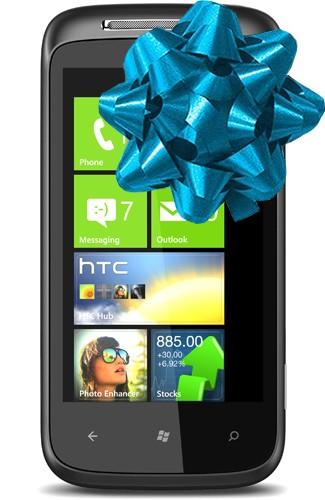 Ah, so you've just been given a Windows Phone 7 handset. If that's what you'd been begging for all this time, then many congratulations; but if not, don't hit eBay just yet -- sure, WP7's range of apps is comparatively limited with its recent 5,000 milestone, but hey, you gotta start somewhere, right? Even at its infancy, WP7 has proven to be a nice alternative choice if you want to stand out from the rest of the smartphone crowd, and don't forget its two powerful weapons: Zune and Xbox Live integration. Until WP7 gets its major upgrade early next year, our holiday guide should keep you and your new phone going for a little longer. Go ahead and read on.

Twitter (free) and Seesmic (free). You won't find many Twitter apps on the WP7 marketplace, but fortunately, Twitter's own app isn't bad at all, and Seesmic stands out too (as usual). The usual geotagging and picture uploading are included in both apps, but there's no classic "comment" retweeting in Twitter's official client. Seesmic has a bit of a leg up since you can add multiple accounts (including Facebook -- nice if you want to avoid jumping into and out of a lot of apps). Unfortunately for both, you'll need to manually check in every now and then for new mentions and DMs, as there's no background notification -- here's looking at you, Microsoft. If you're looking for a better solution right now...

Beezz (free). Try Beezz! It's a really classy looking Twitter app that does proper notifications on your WP7 device. Like Twitter and Seesmic, it still feels slow on updating when you're in the app, but it's a slickly designed piece of software that works as advertised... and it's free! Highly recommended.

Facebook (free). WP7 may have a pretty good Facebook integration, but that only covers the very basic features, so hardcore Facebookers will be needing this official app to get the most of out of Zuckerberg's beast of a social platform. The latest version also comes with Places and photo tagging, if you dig those things.

Flixster (free). If you're residing in supported cities, this handy app can help you decide which film to watch in nearby cinemas. In fact, out of all the Flixster mobile apps, this is probably our favorite flavor here in terms of style and intuitiveness.

The Weather Channel (free). We've been through a handful of weather apps for Windows Phone 7, but the Weather Channel provides the best and most consistent experience for getting basic weather info quickly. We're big, big fans of the live tile, which seems to update with a decent amount of frequency. If we had one complaint, it's that the app is a little on the... er, ugly side, but we can live with it.

GoVoice ($2.99). If you're a Google Voice user, you need to get this app. Not only does it give you a clean, clear interface for checking and managing your Voice account, but if you buy the full version and go through a slightly complicated setup process, you can get push notifications to your device when new voicemail or messages arrive. Well worth the money.

Pictures Lab ($1.99). We had some trouble with this during our review period with Windows Phone 7 at launch, but the app seems to be working fine, and has become a must-have for WP7 devices. Basically, the program provides a set of amazing effects and tweaks for your photos, but the nicest thing about Pictures Lab is the way it integrates with the native photo browser, allowing you to quickly jump into a photo and start messing around.

Netflix (free). If you're a Netflix account holder, you'll want this app. We've actually found that videos tend to start playback quicker than on other mobile devices we've tested, which may be a testament to the company's heavy use of Silverlight. Regardless, getting all of your Instant Queue goodness on the go with your new phone is really, really amazing.

WPTumblr ($1.29). There's no official Tumblr app for WP7 just yet, so here's a third party release that we recommend. It's not perfect, though -- there's no way to browse through each person's own posts within the app; but other than that, all the essential features are there to keep you Tumblring.

Kickbox ($3.99). In case you're not already familiar with Dropbox, it's a popular file hosting service offering 2GB of storage space for free, and then 50GB or 100GB for $9.99 per month or $19.99 per month, respectively. As a third party Dropbox app, Kickbox is surprisingly well made -- you can view many files (PDF, Word, PowerPoint, Excel, text, and audio files; unsupported formats can still be opened as text files), although uploading is limited to pictures only due to WP7 restriction.

Morfo ($1.99). This app is simply hilarious -- get a close-up shot of someone's face, then map the various facial features and you get a 3D avatar that blinks and nods. You can even watch it headbanging to your music collection as well.

Fruit Ninja ($2.99). Until Angry Birds lands on WP7, this is probably the next best thing to fuel your game addiction for the time being. Strike as many fruit combos as possible without triggering the bombs to score.

Bejeweled ($4.99). Classic addictive puzzle game from the PDA era, never gets old. Simply line up three or more gems of the same color to eliminate them before time runs out, or switch to classic mode to work on your score until there are no more moves.

Monopoly ($4.99). This needs no introduction. Perfect time killer despite the price.

Trine's Hangman ($2.99). Hangman! We didn't expect much from this game, but surprisingly, it didn't take long before the built-in leaderboard sucked us in as we progressed up the ladder. The background music (although repetitive) and Wikipedia look-up feature are also nice additions.

Daisy Mae's Alien Buffet ($3.99). Girl, guns, and aliens. Yep, sounds like a fun recipe for an action game. The objective is simple: just run and shoot, so your two thumbs will be hard at work throughout this game. Too bad this isn't an Xbox Live game, but on the bright side, there's no better way to ease your stress than shooting aliens while listening to some funky electronic soundtrack.

Twin Blades: The Reaping ($2.99). We love a good zombie slasher, and Twin Blades doesn't disappoint. There aren't many traditional platformers for Windows Phone 7 just yet, but even if this was a crowded category, we're pretty sure this title would stand head and shoulders above others. A really solid Arcade entry.

External battery. You won't find many dedicated internal high capacity batteries and cases for the few WP7 devices right now, but we do recommend getting a USB external battery like the PhoneSuit Primo Battery Cube or a small HyperMac that'll also play nice with your other gadgets. Seriously, you'll never regret having a little backup power source in your bag -- there's no telling how much juice those Justin Bieber OTA downloads might suck up.

Cleaning. There's nothing wrong with giving your phone some extra TLC, so it's totally acceptable for you to buy dedicated gadget cleaning kits. We've already shamelessly confessed our love for the Brasso Gadget Care polish, but even a handy lint-free cloth will do for some post-meal buffing.

The above selection of apps, accessories, and tips are just a smattering of what's out there. If you've got some picks or tweaks you'd like to share, sound off in comments!
In this article: accessories, Accessory, app, apps, cellphone, holiday guide, holiday guide 2010, HolidayGuide, HolidayGuide2010, microsoft, mobile phone, MobilePhone, phone, smartphone, tip, tips, windows mobile, windows mobile 7, windows phone, windows phone 7, WindowsMobile, WindowsMobile7, WindowsPhone, WindowsPhone7, wp7
All products recommended by Engadget are selected by our editorial team, independent of our parent company. Some of our stories include affiliate links. If you buy something through one of these links, we may earn an affiliate commission.
Share
Tweet
Share