HexBug's robotic creatures are the creepy crawlers of the future 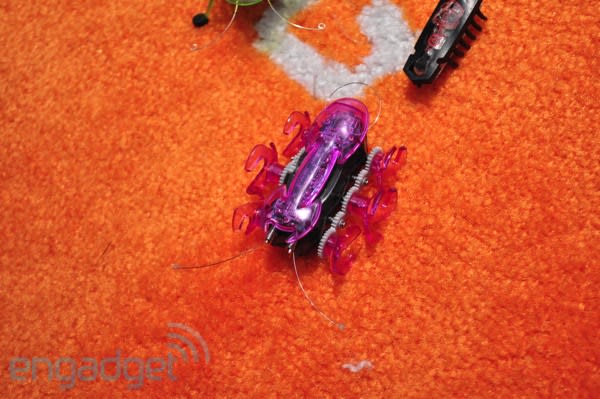 Okay, so it isn't as artsy as making gooey bugs in a miniature oven, but HexBug's little micro-robotic tchotchkes are a good time in their own right. The digital entomologists at HexBugs decided to unleash the new Ant Micro and Nano Newton at New York City's Toy Fair, and for some peculiar reason we were quite enamored with watching these autonomous, high speed creatures run around the carpeted show floor. Powered by two button cell batteries, $11.99 Ant Micro has front and rear touch sensors that allow it to maneuver around objects in its path and it's hard, colored transparent exoskeleton casing was durable enough for the little guys to crash into a wooden plank and reverse course. The $9.99 tiny motor powered, 12-legged Nano Newton holds a special place in our heart, and the Jolly Rancher sized caterpillar vibrates uncontrollably and is able to flip itself over and walk forward. HexBugs will also sell different Habitat sets so the creatures can run around on their own without adult supervision. Luckily for you, these little guys weren't camera shy -- check the pics below!

13
Source: HexBug
In this article: ant micro, AntMicro, hands-on, HexBug, hexbug nano, hexbug nano newton, HexbugNano, HexbugNanoNewton, hexbugs, hexbugs ant micro, HexbugsAntMicro, micro robotics, micro-robots, MicroRobotics, robot, Toy Fair, toy fair 2010, ToyFair, ToyFair2010
All products recommended by Engadget are selected by our editorial team, independent of our parent company. Some of our stories include affiliate links. If you buy something through one of these links, we may earn an affiliate commission.
Share
Tweet
Share