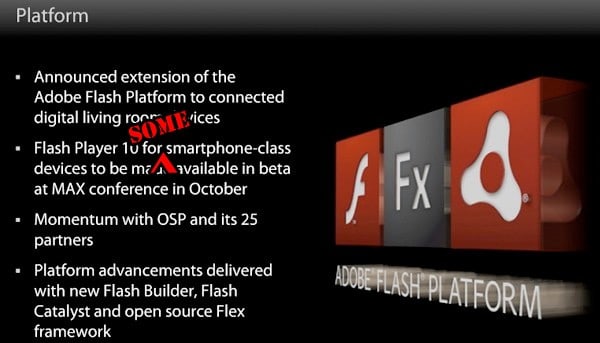 An Adobe employee over in the company's official forums dropped a bomb earlier this month that they've now decided to pass on releasing Flash 10.1 for Windows Mobile 6.5, instead moving straight to 7. The official explanation is that "WinMo6.5 does not support some of the critical APIs that we need," but frankly, this sounds like a load of crap -- since the project was announced last year, there's no way it took them this long to figure out that an official cut for 6.5 wouldn't be technically possible. If we had to guess, the real justification also explains why Adobe has been so quiet on the matter: 6.5's now viewed as a dead-end platform since 7 represents a clean break for Microsoft, and the company feels like it can't be bothered to invest the necessary time, energy, and money to see the project through. In all likelihood, Adobe was briefed on 7 prior to its official announcement at MWC, and that's when the decision was made. Of course, that's all pure speculation on our part -- but regardless, don't get your hopes up, HD2 owners (unless you get an upgrade, that is).
Via: WMPoweruser, PocketNow
Source: Adobe Forums
In this article: adobe, flash, flash 10.1, Flash10.1, windows mobile, windows mobile 6.5, windows phone 7, windows phone 7 series, WindowsMobile, WindowsMobile6.5, WindowsPhone7, WindowsPhone7Series, winmo, winmo 6.5, Winmo6.5, winpho 7, Winpho7, wm 6.5, Wm6.5
All products recommended by Engadget are selected by our editorial team, independent of our parent company. Some of our stories include affiliate links. If you buy something through one of these links, we may earn an affiliate commission.