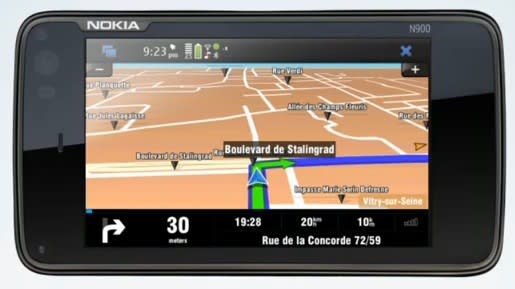 Nokia may still not have brought turn-by-turn navigation to Maemo with its own Ovi Maps, but N900 users can now get their fix courtesy of Sygic, which has just released a version of its Mobile Maps app for the device. Available only in Europe to start with, the app costs €60, and includes maps of both eastern and western Europe, along with the usual "millions" of points-of-interest, speed camera locations and speed limit warnings, and plenty of customization options (including support for multiple languages). No firm word on availability outside of Europe just yet, but Sygic does say that additional regions will be announced "gradually." Head on past the break for a quick demo video.

Source: Sygic
In this article: gps, maemo, mobile maps, MobileMaps, n900, navigation, nokia, nokia n900, NokiaN900, sygic, sygic mobile maps, SygicMobileMaps, turn by turn, TurnByTurn
All products recommended by Engadget are selected by our editorial team, independent of our parent company. Some of our stories include affiliate links. If you buy something through one of these links, we may earn an affiliate commission.
Share
Tweet
Share