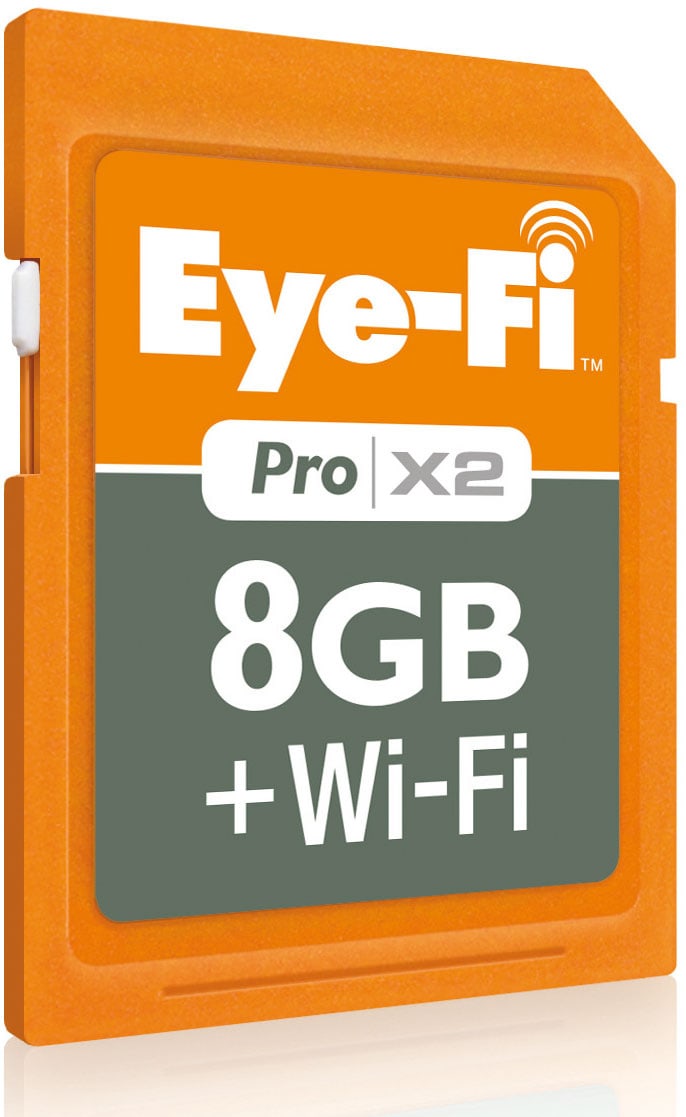 Five years ago, stuffing a fully-functional WiFi radio into the size of a standard SD card would've seemed like science fiction -- and actually, it kind of still does. Be that as it may, Eye-Fi is now well into its third generation of products, amazingly, and we've gotten a chance to check out the company's newest top-of-the-line model that just recently started shipping, the Pro X2. Like the original Pro model before it, the Pro X2 is differentiated from its less pricey stablemates in two major ways: one, its support for RAW uploads, and two, its ability to connect to ad-hoc networks -- in other words, you can wirelessly tether the card straight to your laptop rather than going through an access point. Where the Pro X2 gets the nod, though, is in what Eye-Fi calls the "X2 Engine," a three-pack of features that includes 802.11n support, Class 6 SD performance, and a nifty feature coined Endless Memory. Let's have a closer look at what's changed -- and for current Pro owners, whether the X2 warrants an upgrade.
Eye-Fi
Eye-Fi Pro X2

How would you rate the Pro X2?
We want to hear what you think. Post a quick review now to join the conversation!
Write a review

Using an Eye-Fi card involves installing a menu extra / notification icon (for Mac or Windows, respectively) on your machine that gives you access to the requisite management software and lets you get a glimpse of newly-uploaded photos as they roll in. Having previously used a Pro, we already had the company's Eye-Fi Manager software installed on our machine when we stuck the Pro X2 into the slot (you don't need to use the included USB-to-SD adapter, by the way -- our MacBook Pro's reader worked just fine). Though the software recognized the card and popped open the web-based Eye-Fi portal, we were immediately told that we needed to install Eye-Fi Center to continue, a thicker, Adobe Air-based client that requires local installation. We would've preferred to continue using Manager ourselves, but it's not that big of a deal. Interestingly, we accidentally gummed up the works when we upgraded to (and subsequently killed) Adobe's Gala preview release of Flash 10.1; the menu extra would load just fine, but trying to open Center would result in... well, nothing. Ultimately, we fixed it with a ground-up reinstall.

We found Eye-Fi Center to be a serviceable app that's no more complicated than it needs to be -- it just gets the job done, and it does so pretty intuitively. If you own multiple Eye-Fi cards, you can manage them separately from the list at the left of the window. You can tell which card (if any) is currently connected and eject it, but more interestingly, you'll find a little gear icon that grants you access to the card's full suite of options; this is where you decide exactly how your upload workflow behaves, and it's very configurable. Most of these options have been around since Eye-Fi's early days, though, so let's concentrate on what's new here: Endless Memory mode, specifically, a feature that is shared by all the X2-class cards in Eye-Fi's lineup. Off by default, the feature allows you to configure the card to automatically delete old pictures and videos once they've been successfully uploaded, and you can set it to kick in when anywhere between 10 and 90 percent of the card has been filled. The brilliance of the feature is pretty amazing, and it'd be perfect to take on a trip when you don't have a laptop handy to offload pictures to as you go -- especially combined with the card's support to automatically connect to open and AT&T hotspots. We found that it worked as advertised.

So what about the Pro X2's other new features over the older Pro? We tested the card with a Panasonic GF-1, and we weren't able to discern any perceptible difference in write performance using the newer card's Class 6 support; that's not to say it wasn't physically writing faster, but the camera's buffer seemed to protect us from noticing it. Ditto with 802.11n support -- connected to 802.11g with the old card at home, uploads were already happening as quickly as we could run over to the computer to check them, so we don't really need any marginal boost in performance that 2.4GHz-only 802.11n might provide. Your mileage certainly may vary here, but don't expect miracles.

Though the Eye-Fi Pro series supports (and has supported for a while) ad hoc wireless networks, it's not a feature we'd rely on -- it feels like a hacky capability, and we were never able to get it to work properly with our MacBook Pro. The most straightforward way to configure it is to set up the network on your machine, plug in the card, and select the network to add to the card's list of stored network configurations, but even after following all those steps (and letting Eye-Fi Center verify the configuration), nothing was uploading for us after shooting a couple test photos and waiting several minutes. It's possible that they would've eventually started transferring, but if you have to wait, say, ten or even five minutes for the card to connect, the feature is rendered pretty useless as far as we're concerned.

We've always loved the concept of what Eye-Fi's trying to do, and the Pro X2 unquestionably represents the most complete and capable execution of that concept to date. Endless Memory is a fabulous addition to the X2 line that we love, but ironically, it's not as necessary now that the card has gained an additional 4GB of storage versus the older Pro model. If you've already got a Pro and you find that you've got a serviceable way to manage the 4GB that you have, the X2 probably isn't worth the $150 hole in your bank account -- and if you're new to the world of Eye-Fi and you don't really need wireless RAW uploads, the Explore X2 might be a better choice for $50 less. Either way, though, an Eye-Fi of one sort or another will make a pretty sweet addition to your camera kit.

In this article: 802.11n, eye-fi, eye-fi pro x2, Eye-fiProX2, review, sd, sd card, SdCard, wifi
All products recommended by Engadget are selected by our editorial team, independent of our parent company. Some of our stories include affiliate links. If you buy something through one of these links, we may earn an affiliate commission.
Share
Tweet
Share