Help Engadget build the most comprehensive database of gadgets 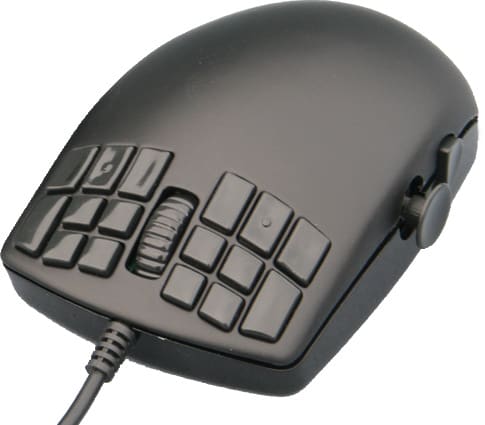 A mouse with eighteen buttons! Does the WarMouse Meta – or what used to be known as the OpenOffice Mouse – need any further introduction? We didn't think so, and ever since we laid eyes on this thing we've been dying to know how you'd even go about using the programmable point-and-clicker. There's no doubt that the $79.99 Meta with its 512K of memory is the most advanced mouse we've ever seen – each of its 18 buttons along with their double-click functions can be configured for different applications, and its analog joystick can be customized to perform eight different commands. Indeed, it's as overwhelming as it sounds, but have we always needed an extra sixteen buttons on our mouse? The answer may shock you. Or it may not. You'll never know unless you hit the break for our full review. Be the first to review the Meta?
Your ratings help us make the buyer’s guide better for everyone.
Write a review

In all honesty, the all black WarMouse Meta looks like a piece of 1980s tech equipment, and while it isn't attractive by any means, its plentiful amount of buttons certainty attracts attention. The response of a friend who saw the mouse sitting on our desk: "Holy buttons!" But on top of not being as handsome as Logitech or Razer offerings, it isn't as comfortable either. The hard plastic shell feels cheap, is wider than most, and our fingers inevitably ended up resting on one of the many mushy buttons. And we don't need to tell you we're not the biggest fans of the 3.5-foot cord – if you do hook this bad boy up to a desktop you'll want to make sure you're located close to the tower or that you pick up a USB extension cord.

It may look like the bounty of buttons on the face of the mouse aren't arranged in any order, but there's actually method to the madness. The sixteen buttons are divided by the clickable scroll-wheel into left and right groupings -- the default left and right mouse buttons are on the far sides, each flanked by another seven buttons labeled A1-A7 and B1-B7 in the Meta Modeware software. Besides all of those, the left edge is home to the joystick and a rounded-triangle shaped clicker. The underside gets no button love, just the high-resolution laser sensor.

Software and everyday use

The designer of the Meta first created the mouse to speed up navigation in World of Warcraft, but then realized that this sort of shortcut functionality could work for many non-gaming applications, including Photoshop and word processing programs. Despite the 30-page user manual and how crazy it sounds to assign shortcuts to so many buttons, it's actually fairly simple to set up. Out of the box the WarMouse worked with both a Lenovo ThinkPad T400s and MacBook Pro 13. The A1-A7 and B1-B7 buttons come pre-programmed for 25 applications, and though you could figure out what each of them does in various apps by trial and error, the included Meta Modeware PC software is really necessary for seeing what each of the buttons do in various applications and programing the gadget. While the Mac OS version of the Meta software isn't ready yet, you can customize modes and buttons using Modeware on the PC, and then plug it into a Mac to reap the shortcut benefits. Not a bad trick, if you happen to have a Mac and PC lying around or run Boot Camp. We were also able to program some of the buttons, including the scroll wheel and joystick, but not all using USB Overdrive.

We were pleasantly surprised at how simple the Modeware software interface was to navigate, and how easy it was to assign functions to each of the buttons. A series of tabs with the application names (i.e. Firefox, Microsoft Word, World of Warcraft, etc.) runs across the top, and below there's a visual diagram of the device, making it very easy to assign corresponding functions. While the commands range from program to program, most of common shortcuts – copy, paste, select all, open a new tab, minimize a window, close a program, refresh – are pre-assigned. If you desire more, you can create entirely new application profiles as well as tweak current settings in the program. For example, we set the B6 button to open Engadget.com in Firefox and B7 to do a tag search on the site.

Getting the Meta set up really isn't the struggle here. Nope, the struggle is all in remembering what you set each of the buttons to do. It's not that we have the memory of a goldfish, but trying to recall what 14 different buttons and each of their double click functions – yes, you can actually program this to do up to 48 shortcuts or commands per mode – requires an incredible amount of brain power. In practice we only ended up using a few of them: we got the hang of using A2 to copy, A4 to paste, B7 to open Engadget, and B5 to open a Google search in Firefox. We should also note here that we did mistakenly paste things into fields we didn't mean to -- yes, it made for some very funny IM convos. As for everything else that the mouse can do, we're just to used to using keyboard shortcuts. The most useful feature? The joystick -- and though you can assign different directional flicks we preferred using it to scroll up and down webpages. It was also comfortable to use in World of Warcraft to run our night elf around the forest. We should also mention that as a mouse for navigating, pointing and clicking, the Meta works just fine -- you can easily adjust the resolution from 100 to 5,600 DPI/CPI in Modeware.

The WarMouse Meta goes where no mouse has gone before. However, at the end of the day we can't help but wonder who could possibly remember how to use so many buttons on a single gadget. Sure, there's niche appeal for designers or gamers, but if you have $80 to spend on a mouse we'd honestly go with a more ergonomic option, like the Logitech MX 1100, and if you are a gamer the $130 Razer Mamba is rated amongst the top. But hey, if you have a stellar memory and need a mouse with 18 buttons that can manage more shortcuts than anything else out there, there's nothing quite like the WarMouse Meta.
Source: WarMouse Meta
In this article: Meta, Meta mouse, MetaMouse, mice, mouse, openoffice mouse, openofficemouse, review, video, warmouse, WarMouse Meta, WarmouseMeta
All products recommended by Engadget are selected by our editorial team, independent of our parent company. Some of our stories include affiliate links. If you buy something through one of these links, we may earn an affiliate commission.