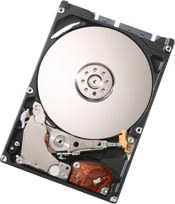 Just when we think that platter-based storage is on its way out it keeps on coming back with a vengeance. A few years ago it was perpendicular recording boosting storage densities by a few orders of magnitude, now it's a pair of new techniques that could push things much further. Your average disk today can manage a couple-hundred GB per square inch while still delivering reliable writes, but if all goes to plan the write methods called bit-patterned recording (BPR) and thermally-assisted recording (TAR) could raise that to 1TB per inch initially and upwards of 10TB per inch down the road. BPR relies on segregating the disk sectors with lithographed "islands" while TAR relies on heating and cooling techniques that preserve the data in nearby sectors. When these Wonder Twins combine, disk sectors can be as small as 15nm in diameter and write speeds can hit 250Mb/sec. Yes, that's megabits, so while you'll be able to store a lot more data than on conventional platters, you won't be able to do so any more quickly than now.

Source: ars technica
In this article: bit-patterned recording, Bit-patternedRecording, hard disk, HardDisk, hdd, platter, platters, tar, thermally-assisted recording, Thermally-assistedRecording
All products recommended by Engadget are selected by our editorial team, independent of our parent company. Some of our stories include affiliate links. If you buy something through one of these links, we may earn an affiliate commission.
Share
Tweet
Share