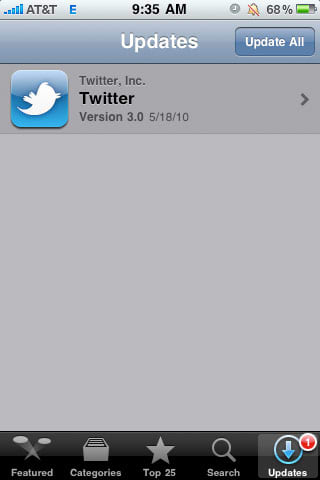 So look -- you've got a plethora of options on the iPhone to keep you connected to the Twitterverse, but if you're looking for something a touch more official, the wait is nearly over. A few short weeks after Twitter acquired Atebits, the creators of the Tweetie app, the company issued the first official Twitter app for Android; tonight, it looks as if a revamped version of Tweetie (3.0, obviously) will claim that same crown over on iPhone OS. It's tough to say exactly what changes are coming, but a few sporadic tips are coming in from far-flung corners of the globe saying that it's already available. If we were the betting type, we'd say it'll finally pop up in the US app store right around midnight. Pins and needles, we know.

Update: It's live in New Zealand, and the full changelog is after the break. Hang tight, everyone else!

Update 2: We're seeing scattered reports that it's now available in the US. Thanks for the image, Danny!

- Tweetie is now Twitter! We didn't just do a name change, we've added a bunch of new stuff.

- Search has been reorganized, now you can search all tweets and find users in the same spot, view Top Tweets and Browse Suggested users.

- More tab has been re-organized to accomplish all this. Users with one account can add a second account under the Accounts and Settings button here.

- Actions we've found people use most, like Retweet have been moved to the main actions bar.

- Minor tweaks were made to tweet rendering so they match Twitter.com tweets

We're receiving the first screenshots, and the app has a new icon. Images courtesy of @sam_symons.

Source: Mac Stories, Tweetie (iTunes link)
Coverage: The Next Web, Into Mobile
In this article: app store, apple, AppStore, iphone, tweetie, tweetie 3.0, Tweetie3.0, twitter, twitter for iphone, TwitterForIphone
All products recommended by Engadget are selected by our editorial team, independent of our parent company. Some of our stories include affiliate links. If you buy something through one of these links, we may earn an affiliate commission.
Share
Tweet
Share