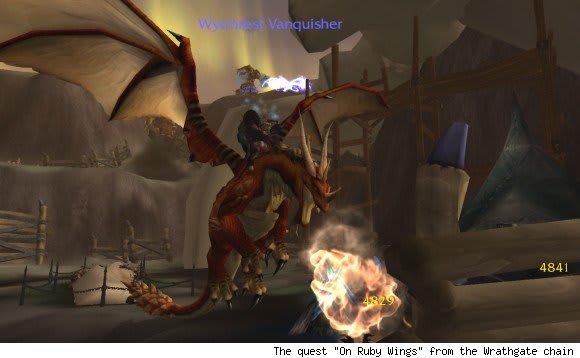 Every so often I get tired of the self-seriousness that infests some of (OK, most of) the other work I do here, and get the urge to write something purely for fun. After our series on evil achievements and the relentless misery of School of Hard Knocks, I'd like to spend some time on achievements that are nothing but an absolute joy from beginning to end.

The following is an entirely arbitrary set of five achievements that I personally believe are a hoot. Eventually, I'd like to expand this in the same fashion as the evil achievements series, and I'd welcome any comments or suggestions on your own favorites. Namely, what makes certain achievements fun? Is there any achievement you've made a point of getting on each of your characters?

Into the Wild Blue Yonder

I try to play WoW responsibly, which precludes having it around while I'm working on something else, getting some reading done or when I have an editor breathing down my neck about a deadline (this last one has been somewhat more troublesome since the advent of time stamps on the Armory, but that's why God invented alts).

But I'll admit to being possessed of an unhealthy obsession when my main hit 67 in Outland. Back in Burning Crusade, you could only train the expert riding skill (aka the ability to use a flying mount) at level 70 -- unless you were a druid. Druids trained Flight Form at level 68 back then, and I wanted to fly more than anything else. Epics? Who cared? Raiding? Feh. Patch day? What's that?

But flying? Just the thought of being able to leap into those beautiful Outland vistas as a stormcrow was enough to keep me leveling at a manic rate. This culminated in the only all-nighter I've ever pulled in game, until I finally hit 68 and, in a blissful haze, trained Flight Form, hearthed to Outland and took off. I spent the next two hours doing absolutely nothing but exploring the world from above, observing the more dangerous areas around the Black Temple as a crow and taking screenshots of Flight Form against Hellfire Peninsula's brilliant sky.

I maintain that Swift Flight Form is among the best things in the game, and I can't wait to fly in Azeroth.

Shave and a Haircut

Admit it: You've spent a ridiculous amount of money at the barber shop. The urge to get our characters looking as cool as possible has resulted in people returning to the shop over and over again to get the color, hair and feature combination most suited to their present gear. I mean, because my male tauren shaman has one horn option that looks great with a tier 9 helm, but you've just got to adjust if you make the leap to tier 10. I find myself doing this for even the most minor among my alts, toying with their looks until I'm perfectly satisfied with their appearance.

Not that it lasts. I'll be back next week.

There's something wonderfully addictive about tracking down as many little pets as you can and then pulling out whichever suits your mood. I'll admit there's a touch of evil to the 1-in-1,000 drop rates seen for many of dropped pets (here's looking at you, whelplings), but you do get pretty happy when they finally drop. The sheer variety of ways to get them is entertaining in itself. If you're going for any of the pet achievements, you'll get acquainted with all of the pet sellers in your faction, do some farming, a little questing, pester chicken farmers and -- one of my personal favorites -- kill a deranged Kael'thas. The first time I ever used the trade channel was to ask people if they knew where Halpa was in Thunder Bluff (I wanted a little prairie dog and, still a new player, could not for the life of me figure out how to find the vendor), and my first guild activity was running around Ambermill hoping that the Dalaran Spellscribe would spawn in the hopes of farming black tabby cats.

I used to think that my pet obsession was just a personal quirk, and then I was introduced to Warcraft Pets. Compared to some, I'm a piker. And yeah, those little pets mean a lot.

Veteran of the Wrathgate

The Wrathgate chain and the battle for the Undercity have gotten a lot of press, and deservedly so; the entire quest chain is a magnificently immersive experience. Your character gets directly involved in one of Warcraft's most seminal and lore-saturated events, with effects felt more than a year later in Icecrown Citadel. Really, you could even include the lead-up quests from the Howling Fjord and Borean Tundra here; Blizzard more or less turned the 70-75 questing experience into something within spitting distance of a single-player campaign reminding you that actions have consequences, and those consequences can and will occur despite the best of intentions.

Oh, and that you spend almost the entire battle for the Undercity with a speed buff, an enormous damage boost and functional immortality doesn't hurt either. As the developers themselves have observed, anything overpowered is fun.

To be perfectly blunt, BRD isn't always (or even often) a great experience for a level-appropriate character. The place is huge, it's absurdly easy to get lost, it feels like it's got thousands of bosses and I have literally never had a 50s-level group do the entire place in one go. For a group that's still getting experience from the place, it takes hours to go from start to finish and you'll probably wipe several times along the way. I never completed it in my 50s and frankly hated the place after getting horribly lost so much. BRD was too damn big, too damn long and fiendishly complicated to understand for a new player.

But I grew to love the dungeon when I returned to it as a higher-level character. Dormitories, a gladiatorial match, a prison housing friendly NPCs, a bank you could rob, a bar full of dwarves too drunk to bother attacking you, a reputation vendor, engineering plans, ghosts you had to battle to get to the emperor, a rare shirt, the Lyceum (oh, the Lyceum) ... this place has it all. It's a huge city carved into the bowels of a volcano, and there's an endless array of lore and plunder available if you can just pay attention and survive its inhabitants. The closest equivalent would be crash landing on the Death Star and deciding that the princess can wait a bit while you conquer the place from the top down (that Princess Moira is dressed exactly like Princess Leia is just an amusing bonus).

It's your character versus an entire empire of evil Dark Iron dwarves, and no dungeon has been more epic than that.

Working on achievements? The Overachiever is here to help! We've covered everything from Glory of the Hero and Insane in the Membrane to Master of Alterac Valley and Lil' Game Hunter, and you can count on us to guide you through holidays and Azeroth's special events.