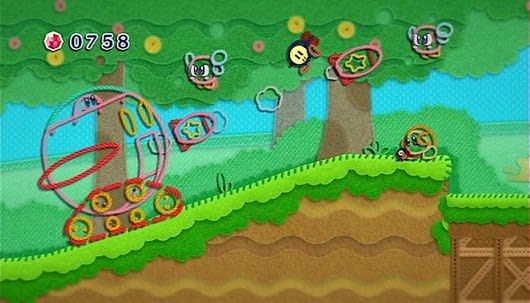 click to see Kirby's Epic Screenshots
Though Nintendo announced games in all its major franchises simultaneously, it's not playing it safe within those franchises. Kirby's Epic Yarn, for example, is still a cutesy side-scroller, like other Kirby games, but it presents a new art style that seems pretty far out for such a mainstream game, one that has charmed me to an uncomfortable degree. The game also adds a new gameplay gimmick that, while it's not as drastic a change as Canvas Curse, still alters the basics of Kirby. And, like every new 2D platformer announced at E3, it has co-op.


Kirby's Epic Yarn is presented in a world made entirely of textiles, and developers Good-Feel and HAL Labs have firmly committed to it. Kirby and his co-op companion are made of loops of yarn with cartoony eyes -- with the texture of the yarn clearly visible. The ground is made of stitched patches of fabric, and it sags when stepped on. When Kirby goes inside a building, you see his outline bulging out of the fabric like he's inside a pocket.

Of course, this new world lends itself to new gameplay gimmicks. Kirby's trademark "inhale" technique wasn't in play at all; rather, he now has a loose string of yarn that he uses as a whip (with a button press, no motion tricks here). This can be used to grab enemies and unravel them, then roll them up into a ball of string that can then be thrown. It can also be used to swing from hanging buttons, or in a few cases to unzip a zipper and reveal a new area, or grab onto a string and draw the stage together, bunching up the "fabric" background and shortening a chasm. In the boss battle (against a huge dragon) it's used to pull the boss's tongue and damage it.

Kirby maintains many of his "copy" abilities by default -- when dashing, he transforms into a car, and he can turn into an umbrella to slow his fall. But At one point in the level, Kirby and his friend transform into a giant Kirby-bot, controlled in concert by both players. Kirby moved the tank treads and aimed and shot missiles, while player 2 punched with an extending arm with a giant boxing glove attached.

Like New Super Mario Bros. Wii, there's a potential element of interference, leading to both wacky fun and irritation. Players can grab and throw one another like they can anything else, but since the characters in this game are slower and also equipped with ropes to grab one another, there seems to be a lot more accidental grabbing and throwing of co-op partners. This probably won't be much of a problem in the long term -- Kirby games tend to be on the simple side, so a little chaos is probably welcome.

In this article: e3-2010, Kirby, kirby-epicyarn, Kirbys-Epic-Yarn, nintendo, wii
All products recommended by Engadget are selected by our editorial team, independent of our parent company. Some of our stories include affiliate links. If you buy something through one of these links, we may earn an affiliate commission.
Share
Tweet
Share
Save