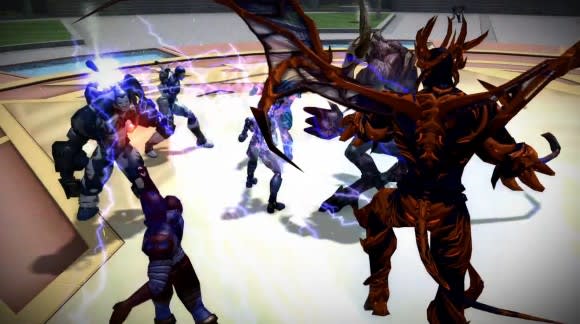 With less than a week to go until the official release of Going Rogue, most City of Heroes players are on the edge of their metaphorical seats. (Or leaning back in the reclining chairs of cynical pre-disappointment, but that's another metaphor.) It makes a perfect time for Paragon Studios to launch their final video documentary on the coming expansion, this one focusing on the mirror world of Praetoria.

Embedded past the cut, the video features the team discussing the overall impression of the new areas, both from a gameplay and lore perspective. We've seen the area in action more than once now, but the newest documentary shows off yet again just how different the game really looks. It also discusses how the new areas are intended to be a revamp for the entire game, starting from the ground up and moving forward. It's an ambitious goal, one that City of Heroes players will get to experience in less than a week -- but until then, you can check out the video past the cut to wrap up the four-part series.

In this article: backstory, city-of-heroes, city-of-heroes-going-rogue, city-of-villains, coh, cov, cox, gameplay, going-rogue, gr, lore, ncsoft, paragon, paragon-studios, praetoria, ultra-mode, video, video-documentary, videos, visuals
All products recommended by Engadget are selected by our editorial team, independent of our parent company. Some of our stories include affiliate links. If you buy something through one of these links, we may earn an affiliate commission.
Share
Tweet
Share