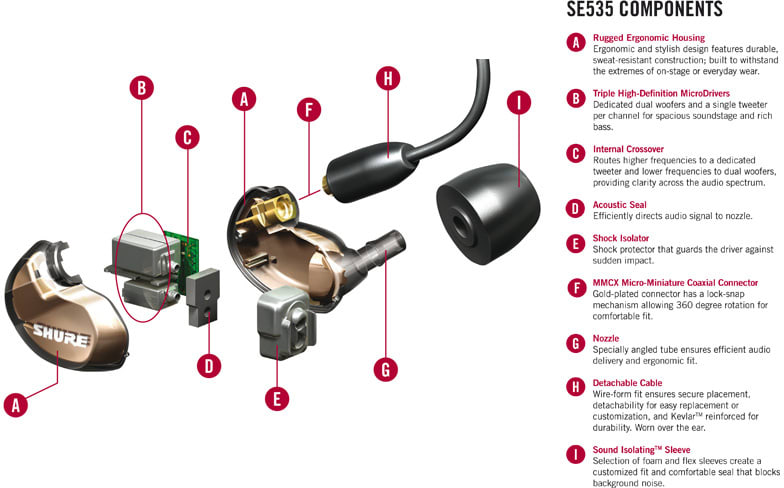 It's been a good, long while since we visited the upper rungs of Shure's in-ear monitor lineup (about four years, to be exact), and for good reason: the E500 / SE530 was already a stellar product that the company was understandably in no rush to replace. Of course, for the heart-stopping $500 they commanded, buyers had every right to expect aural perfection -- just as they do with the new SE535 that replaces them. Price? Still $500, of course. Read on to find out exactly how Juno Reactor sounds after you've been relieved of half a grand.

How would you rate the SE535?
We want to hear what you think. Post a quick review now to join the conversation!
Write a review

So what kind of improvements over the E500 have been afforded by four years of development? Not much, really, because the SE535 is all about refinement -- a version 1.1, if you will (keep in mind that the E500 and SE530 were completely identical). The biggest single difference may be in the cable design, where Shure has gone with a new Kevlar-reinforced material that it claims should be far more resilient than the standard plastic of old. That's not all they've done with the cable, though -- Shure must've really been burned by frayed and destroyed cables on the old model, because they've added gold-plated connectors right on the monitors themselves. In other words, they've completely eliminated the problem of a bad cable rendering your whole headset useless, because you can disconnect it right at the base of the monitor and replace it yourself. Of course, that's both good and bad: it probably means Shure (which has a pretty fantastic reputation for customer service) will be less likely to take your headset on a warranty return for a bad cable -- they'll just be able to sell you a new cable. And because the connectors on the monitor side are proprietary, you'll definitely be buying it from them.

And that leads us to one area where you could argue the SE535 is a small step backwards from the E500: they've dispensed of the select-a-size cable concept. On the E500, the 3.5mm plug was just a few inches from the monitors themselves, and you could plug either the included 3-foot or 9-inch cables or another cable of your choice into the end to make the headphones reach as far as you needed without unnecessary slack or tangling. This also makes the Push-To-Hear module -- which Shure discontinued at the same time as the SE530 -- more difficult to use on the SE535 because you've got a ton of slack between the monitors and the module's input side. Not good for clipping it to a shirt or coat collar. Then again, we suspect Shure discontinued PTH for very good reasons -- it was big, unwieldy, ugly, makes you look like a dork, and people around you never get used to the concept of you leaving your earbuds in while they talk to you -- so you may not miss it anyhow.

So apart from the fact that Shure no longer includes 3-foot and 9-inch cables, the included accessories are basically the same as they were before: you get a wide selection of tips of different styles and materials (we like the black foam and triple flange), an adjustable inline volume control (which, again, is a little trickier to use because it can't be connected close to your head), a hard nylon zippered case, and both aircraft and quarter-inch jack adapters. It's all bundled in the same ultra high-quality aluminum box that E500 / SE530 owners enjoyed, and it's a keeper -- trust us, you're not going to want to throw it away. As with the SE530, the case lacks an internal spool -- a feature we loved on Shure's small round cases of old -- but we're thinking the SE535's bulkiness precludes easy spooling that doesn't risk damaging anything. It makes packing and unpacking your headphones a little less organized, but it's not a big deal.

As fit goes, the monitors are a little more squared-off than the E500s, but they're generally the same size and shape -- in other words, if you were comfortable wearing the E500s, you'll be comfortable with these. If you're completely new to this type of product, you'll discover that "installing" the SE535 in your ear is a little more involved of a process than a lower-end earbud or in-ear monitor; you need to properly snake the cabling around your ear, make sure the tip goes deep enough in your ear canal, and -- depending on the type of tip -- potentially go through extra rigmarole like rolling the tip between your fingers to pre-compress it. Rest assured, you'll look like a dork the first few times you do it, and it'll take you a few tries to get it right. You'll also need to experiment with tip types and sizes to make sure you're comfortable with the fit and sound. One other change Shure has made to the SE535's cable involves the use of a formable sleeve near the monitors, which means you can do a better job of wrapping the cable around your ear and having it stay there without flopping off; it's a nice touch. Shure has also introduced a new color option this time around -- clear -- which means both the monitor and the cable are transparent. It looks extremely cool, and we'd even argue gives it more of a professional appearance.

That said, once the SE535s are in, they feel great (assuming you've selected tips that fit properly) and rest relatively flat against the ear. And this is where the magic begins: the sound produced by these things is nothing short of magical. We're having a hard time discerning a difference between these and the already-fantastic SE530s, which makes sense -- as far as we can tell, Shure is using exactly the same triple-driver setup to produce an insane dynamic range that's crisp, clear, and full from top to bottom with no perceptible break-in period (it's open to debate, but armature drivers are often considered to not need any break-in time). In fact, if anything, we'd actually argue that the sound is too perfect, which makes it adept at calling out imperfections in lossy formats and also encourages you to turn up the volume way -- way -- too loud. After testing the SE535s for several consecutive hours, we came to a sudden realization just how loud we'd had them cranked up, and we had a little ringing in the ears for a while. Scary. Seriously though, it can't be overstated: monitors at this level of sound quality give you an entirely new perspective on the music collection you already own. It's amazing.

$500 headphones aren't for everyone -- and admittedly, you need to be something of an audiophile to have even made it this far into the review, much less consider ever owning a product like the SE535. That said, it's not hype and these aren't expensive just for the sake of being expensive: you will, against all odds, get what you pay for with these things. If you already own the E500 or SE530, you can safely save yourself the cash this time around -- you're not getting any improvement in sound quality with the SE535, and the main improvements center around robustness of the cable, so you can just wait to upgrade until (heaven forbid) your current unit's cable shreds. If you're getting into the high-end monitor market for the first time, though, the SE535s need to be on your short list.

In this article: earbuds, iem, in-ear monitors, In-earMonitors, review, se535, shure
All products recommended by Engadget are selected by our editorial team, independent of our parent company. Some of our stories include affiliate links. If you buy something through one of these links, we may earn an affiliate commission.