DARPA's Transformer TX 'flying Humvee' project gets off the ground 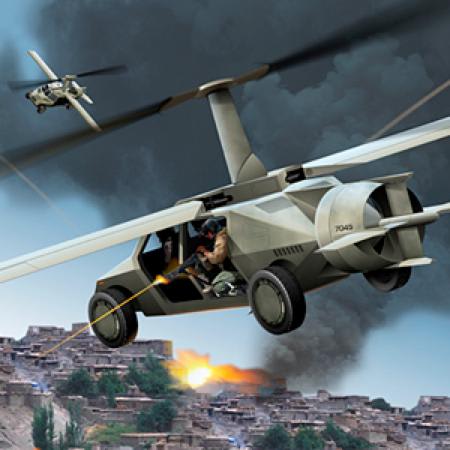 Sometimes it feels like the Military-Industrial Complex only exists to keep us entertained with tales of laser weapons and robots that eat enemy combatants -- not that we'd complain if it did! And for today's fantastical wargadget, we have nothing less than a flying Humvee. The Transformer TX project calls for four-man vehicle that drives like a jeep and then takes off to avoid roadside bombs (or impress the ladies). While DARPA has yet to say who will be awarded with the contract for the conceptual design stage of the project, Popular Mechanics has done some digging and it looks like Lockheed Martin and AAI Corp are both on the short list. While the former has declined to talk about its offering, AAI's incorporates something called "slowed-rotor / compound," where a rotor provides lift on takeoff, and when it achieves a certain speed wings take over. We'll be waiting for our review unit, but in the meantime you can get a closer look after the break.

Via: FOX News
Source: Popular Mechanics
In this article: aai, darpa, defence, flying car, FlyingCar, humvee, lockheed martin, LockheedMartin, transformer, transformer tx, TransformerTx, transportation, wargadget
All products recommended by Engadget are selected by our editorial team, independent of our parent company. Some of our stories include affiliate links. If you buy something through one of these links, we may earn an affiliate commission.