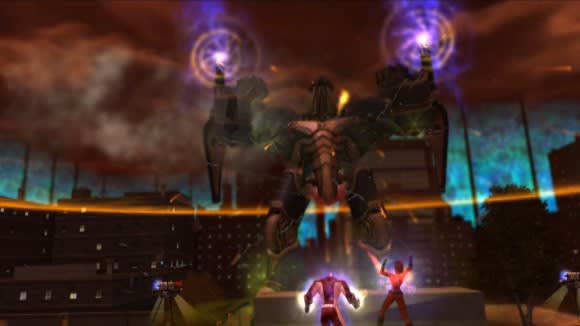 At the best of times, the task forces in City of Heroes resemble the huge crossover events of comics at their finest -- sprawling events covering multiple titles that give heroes and villains alike a chance to really show what they can do. And if there were ever an occasion for some truly impressive superhuman antics, it would be the invasion of Praetoria coming in Issue 19. Paragon Studios has released the trailer for the first of two major task forces, and it should give some idea of the scope of what awaits.

First shown at the New York Comic Con panel, the trailer features several shots showing the devastation wrought by Praetoria's machines of war, as well as the powers that heroes are unleashing to fight back. Some of these powers appear to be related to the Incarnate system, although the team was reluctant to definitively identify them as such. Take a look past the break for a sneak peek at what's coming next for City of Heroes, in all of its world-colliding glory.

In this article: apex, apex-task-force, city-of-heroes, city-of-heroes-going-rogue, city-of-villains, coh, comic-books, comics, cov, cox, going-rogue, gr, major-event, ncsoft, paragon, paragon-studios, patches, praetoria, praetorian, task-force, trailers, updates, video, videos
All products recommended by Engadget are selected by our editorial team, independent of our parent company. Some of our stories include affiliate links. If you buy something through one of these links, we may earn an affiliate commission.
Share
Tweet
Share