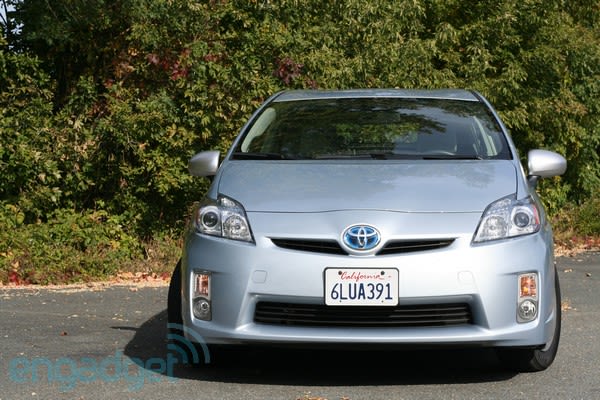 The future of modern transportation awaits us. By 2012 we expect to have multiple proper, reasonable choices for fully electric vehicles, but check your calendar and you'll see it's still 2010, leaving us still waiting for cars like the Leaf and the Volt to make their proper appearances. Toyota would like to remind you that the Prius is still here, celebrating an amazing tenth year of availability in the US and teasing us with the upcoming plug-in model, offering a taste of EV with the practicality of a hybrid. We just spent three days with one and managed a quite impressive 91mpg average -- no hypermiling required. Click on through for our detailed impressions of this five-door eco-warrior. We'll get this out of the way early: the Prius PHEV is still very much a prototype, not available for sale and not destined for widespread availability for another year or so. Despite that, the car we tested is remarkably polished and certainly looks like something that rolled straight off a production line -- largely because it's mostly a fourth-generation Prius. Still, some extensive modification was required to carve out room for a considerably larger, considerably heavier (by some 300lbs) lithium-ion battery pack.

This pack receives the juice coming in through the plug on the front-left fender of the car, which comes with an adapter you can plug into a standard 110 or 220 outlet. At 110 it'll take three hours to top of the cells, half that at 220 and, while 440 volt charging is not supported yet, it's expected to be there by the car's release, and expected to take less than 45 minutes.

What do you get for that? Somewhere south of 14 miles worth of range operating on pure, sweet electricity -- assuming you can keep it under 62mph, at which speed the gasoline engine spins up to help things along. Floor it and that internal combustion engine will also spin up, but surprisingly that's not really necessary. The car is, actually, reasonably responsive in this mode.

We actually averaged around 12 miles of pure EV driving when fully charged. That was on hilly roads which put something of a strain on the batteries going up, though they did make for an easy time of things going back down. Acceleration in this mode is quite respectable, enough for you to mosey on away from a stoplight without getting an SUV up your tailpipe. Naturally you can extend your range by a few crucial tenths of a mile if you do take your time, which is something best done without impatient commuters behind.

In EV mode the car is blissfully quiet, making only that futuristic electric whirr as you accelerate at low speeds, a sound that naturally gives way to wind noise at about 40mph. By contrast when running as a parallel hybrid you'll often hear the ICE spinning up, a dull, unpleasant drone somewhere under the dashboard -- groaning reminder that you're probably not driving as efficiently as possible.

Really, though, there's no incentive here to try to drive the Prius in a sporty way. That extra weight does nothing to help already clumsy handling; it's a soft, comfortable ride that's perfect for a highway commute and perfectly ill-suited for a twisty road. Regenerative brakes, meanwhile, are famously vague and hard to modulate, just like a current Prius.

But, that's not to say the car isn't fun to drive. There's a bevy of information at your fingertips (thumbtips, to be specific) about driving habit, including a realtime throttle position indicator that more or less challenges you to drive as sprightly as possible without dipping into the gasoline tank. At first it's hugely distracting, but after about 30 minutes you can track it from your peripheral vision, and soon you'll feel like a Super Street Fighter II champion who never needs to look at his or her health bar yet always knows exactly how many pixels are left.

Beyond that, though, there's sadly little to get excited about. The Volt's fancy smartphone app that let's you set a cozy interior temperature before you brave the cold in the morning? There's nothing like that here. Ford's fantastic Sync and MyFord infotainment integration? Nope. The closest thing here is a 3.5mm line-in tucked away in the armrest where you can jack in your media player of choice, while a boring, standard-issue resistive touchscreen nav unit sits lazily in the center console. The car is, at least, truly keyless. Keep the fob in your pocket and the doors will unlock themselves when you touch the handle -- a nice thing when you're dealing with two dogs on two leashes pulling in two different directions.

So what kind of mileage did we get after three days of mostly back-roads miles? A little over 91mpg average driving more or less normally in both EV and hybrid modes, which is quite impressive regardless how you look at it. But, really, you should look at it a bit more closely. This was largely trips of 30 miles or less that ended with a plug going into a socket, meaning the car was nearly always fully charged before we pulled onto the road. Still, we've read plenty of other reports of people living with the Prius PHEV for weeks, and most are managing 80mpg or higher.

And for the times when that fancy new battery pack was depleted? We saw around 55mpg then, which is still quite impressive. Sure, a three-cylinder diesel econo-box can probably beat that without getting too much soot on its rear bumper, and for some people that's still the smarter way to go. But, for anyone who makes lots of short trips at speeds under 60mph, the Prius PHEV could be a hugely smart buy.

We say "could be" because Toyota still isn't giving us a dollar figure, and that will obviously be a factor in terms of its benefit. We're guessing this option will cost somewhere north of $3,000 which, on top of the $22,800 MSRP for a current-year Prius, doesn't make this a cheap car by any means. It's also going to be a difficult car to find, with most reports indicating that just a couple-hundred of the things will find their way to American streets in 2011, with a proper release in 2012. The future, alas, is still very much the future.
In this article: automobile, car, feature, featured, features, hybrid, phev, plug in hybrid, plug-in, plug-in hybrid, plug-in prius, Plug-inHybrid, Plug-inPrius, PlugInHybrid, prius, test drive, TestDrive, toyota, toyota prius, ToyotaPrius, video
All products recommended by Engadget are selected by our editorial team, independent of our parent company. Some of our stories include affiliate links. If you buy something through one of these links, we may earn an affiliate commission.
Share
Tweet
Share
Save