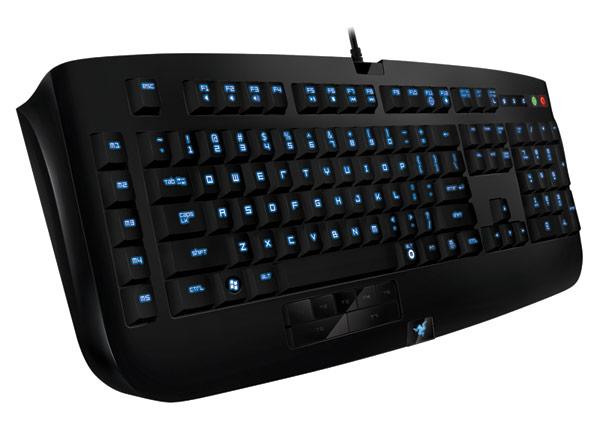 And you thought you were set after procuring one of the many Naga mice on the market now. Think again. In a never-ending quest to milk the MMO market, Razer has just issued the planet's first (or so it says) MMO gaming keyboard. The Anansi is a jet black board with a rather standard layout, but those seven thumb modifier keys are bound to enhance gameplay in some way or another. You'll also get over 100 programmable Hyperesponse keys with on-the-fly macro recording, storage for up to 20 gaming profiles, five bonus gaming keys and 16 million color backlight illumination. Oh, and for those of you doubting Razer's attention to detail, you can totally deactivate the Windows key while in "gaming mode." Check it this December when it ships worldwide for $99.99 / €99.99.

"The Razer Anansi gaming keyboard is the new weapon of choice for MMO gamers," said Robert "RazerGuy" Krakoff, president, Razer USA. "Let's face it, the regular keyboard that came with your PC was designed and built for typing, not for MMO gaming. With its revolutionary seven thumb modifier keys, every key combination that you had before is now multiplied by seven times. The Razer Anansi allows you to use every spell, ability or custom macro in your arsenal -- both instantly and in complete comfort."

Designed and engineered especially for MMO gameplay, the Razer Anansi gives MMO gamers the power to instantly use up to seven times more commands and abilities over the current 12 ability keys normally accessible on a standard keyboard. The Razer Anansi also features over 100 fully programmable keys, on-the-fly macro recording, five additional gaming keys and the ability to customize the key backlighting from over 16 million colors.

The Razer Anansi is also designed to be used seamlessly with the 12-button mouse keypad on the Razer Naga and Razer Naga Epic MMO gaming mice, giving gamers a supreme level of battle control and ergonomic comfort when playing their favorite MMO game.

The Razer Anansi was designed and engineered especially for the MMO gamer with the ability to execute seven times more commands instantly compared to a standard keyboard. Its seven thumb modifier keys located below the space bar allow gamers to actuate every possible combination of modifier keys (shift, ctrl, alt) in total accuracy and comfort using a single key stroke. With over 100 programmable keys and five additional gaming keys, the Razer Anansi allows both casual and hardcore MMO gamers alike to further expand their repertoire of boss-killing abilities and macros, providing total control with convenient and instantaneous command executions.

In this article: accessory, anansi, gaming keyboard, GamingKeyboard, input peripheral, InputPeripheral, keyboard, mmo, peripheral, Razer, Razer Anansi, RazerAnansi
All products recommended by Engadget are selected by our editorial team, independent of our parent company. Some of our stories include affiliate links. If you buy something through one of these links, we may earn an affiliate commission.
Share
Tweet
Share