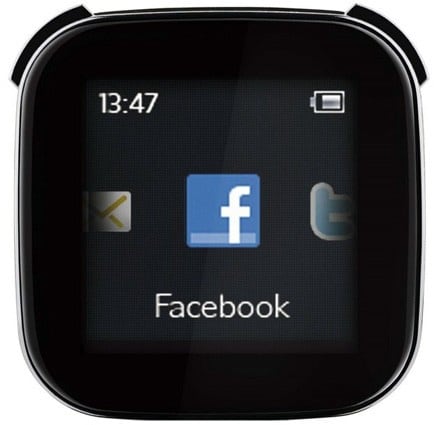 This isn't the first time that Sony Ericsson's dabbled in the field of spy-like Bluetooth wrist accessories, but as we all know, extortionate prices and limited functionality meant these old timers never really took off. But now, things may be different: SE's freshly baked LiveView promises to offer a generous set of features -- alongside your Android 2.x device -- while going a little easier on your wallet. It sure sounds tasty, but before you grab your virtual shopping cart, be double sure to read our full review first... right after the break.

How would you rate the LiveView?
We want to hear what you think. Post a quick review now to join the conversation!
Write a review

The LiveView is one of those odd products that looks seemingly plain from the user's perspective, yet for us it's caught a fair bit of attention when worn on our wrist. At a humble 0.53 ounces in weight, 0.4 inches in depth and 1.7 inches in diagonal width, this aesthetically simple device resembles a black mini stopwatch with two buttons at the top -- power and LED on the left, and select on the right (the latter of which was slightly sticky on our particular device). There's not much at the bottom except for a micro-USB port covered by a soft flap. This leaves us with the front 1.3-inch OLED display -- which is annoyingly reflective under daylight -- beneath a domed piece of transparent hard plastic, and a trio of slits on the back for easily snapping to either the shirt clip or the watch bracket. To detach, simply poke the device from the back of either attachment. As for the wristband, the LiveView's NATO style nylon strap certainly won't win a top prize in a beauty contest, especially with its elastic strip and velcro, but at least we haven't had much discomfort from it, plus it's easily washable when the time comes.


Given the lack of navigation buttons, you'd imagine the LiveView is equipped with a touchscreen interface à la iPod nano, but it's not that straightforward. Soon after powering up the device, we frowned upon what seemed to be a DOA product as it didn't respond to our swiping gestures. We then turned to our manual as a last resort, and learned that the LiveView actually uses the black border as its four-way touch-sensitive navigation controls. Mystery solved.

As with many Bluetooth peripherals, holding down the power button while dormant triggers the LiveView's pairing mode, as indicated by the blinking LED. Once paired with our Android 2.x device, we used the LiveView app (available on the Android Market) to establish the final connection. It was only then when we could go pass the clock screen and enter the menu, which packs the following mini apps: all events (which aggregates all the feeds), text messages, Facebook, Twitter, find phone, plug-ins, calendar, and RSS. With the exception of plugins and find phone, all these apps follow the same format: once launched, you can scroll horizontally between excerpts or messages -- we've found this pretty useful for when we're stuck on a jam-packed bus or train and not able to reach our phone in the pocket. If you want to view the full article or reply to messages on your phone, just select the action box at the bottom of the page and your phone will be ready as you whip it out -- you can see this in action in the video above. That said, the Twitter app only took us to the mobile homepage, so SE will have to amend this.

As far as notifications go, the LiveView vibrates and flashes an icon at the top whenever new items arrive, and you'll also see the number of new items indicated above the corresponding app icons. You can tweak the update frequency -- from every 15 minutes up to every 3 hours or never -- and select sources in the phone's app, but there's no giant sync button to feed your LiveView straight away. More disappointingly, the apps only show you alerts as they come along, rather than letting you browse through, say, upcoming calendar events or old text messages that arrived when the LiveView app was closed. Okay, maybe the text messages aren't essential, but we think it'd be super useful to have a more powerful calendar app on the LiveView, considering how often we access the calendar while on the move.

Alongside the aforementioned social and news feed apps, there are three more features that we dig, the first one being "find phone": as long as you have the LiveView app running on your Android device (background operation is fine), selecting the mini app on the LiveView will prompt an alarm on the phone until you find it. Our second shout-out goes to a less obvious feature: after some tinkering (since we hate reading the manual), we discovered that holding down the select button prompts a simple remote control app -- consisting nothing more than controls for volume, forward and back -- for Android's stock music player. Ironically, rather than controlling the sluggish Mediascape on our Xperia X10, the LiveView pulls up the hidden stock music player -- great news for the handful of X10 users. And finally, we have the incoming call feature, which simply shows you the caller ID and phone number, along with the option to mute the phone's ringer. Interestingly, there's no option to just kill the call entirely -- our assumption is that this is on the grounds of politeness, but then again, we might as well keep the caller from waiting.

Finally, we have plug-ins. This is where you can help yourself to some third-party mini apps in the Android Market, and the LiveView app picks them up as soon as they are downloaded. We've played with three plug-ins: Weather, Gmail, and Fake Call. Sadly, Weather didn't seem to work at all as all we could see was an analog clock, and all Fake Call did was trigger a chosen ringtone without showing a fake caller ID -- perhaps it should be renamed to Yo Check Out My Ringtone. The Gmail plugin -- which should've been a built-in feature -- was more desirable: it follows the same format as the other news feed apps, plus you can use the Android app to set your desired email snippet length, as well as filtering emails with labels for specific Gmail accounts. The only problem is that the mini app doesn't pick up new emails when they arrive on the phone, and there's no way of changing the update frequency. Hopefully the developer will get this fixed soon.

While most of these features sound attractive, it's all about the general performance of the LiveView. Well, here's the bad news: out of the three Android phones that we tested the LiveView with, we saw the device often losing connection with the Desire Z and Streak, whereas with the X10 it performed best. But even with us sticking with the X10 full time, we still suffered from the occasional disconnection, refusal to reconnect, and an unreliable battery indicator -- a lot of the times it's stuck with a full bar instead of reflecting the actual battery level. We asked SE whether the LiveView's firmware would be upgradable to rid these bugs, and the answer was a straight no. Wow. Just wow. Update: Contrary to what SE told us previously, the company has now confirmed that the LiveView will indeed be upgradeable.

In terms of battery life, the LiveView tended to last for a day for us, so it's best to charge it up every night. In fact, you'll have to make sure your phone's juiced up for the day as well -- you don't want to end up with a dead phone and accidentally resetting your LiveView (which has happened thanks to our long sleeve clothings), thus ending up with a non-functional watch. Yes, that's right: this little rascal doesn't store time natively -- it obtains the time and date from the phone after every boot up, so be careful with that power button. Ideally, the LiveView should really have its own clock in case things go pear-shaped.

You know that feeling when you were promised a pet monkey for birthday, only to realize that your dad actually meant a little bottle of sea monkeys? That's the same disappointment we got from the LiveView. Seriously, SE had a lot of potential here, only to be let down by shoddy compatibility -- probably not entirely SE's fault -- and buggy software. Worst of all, you won't be able to upgrade the firmware on the LiveView, so it looks like said bugs will be staying around for a while. Shame, because this is otherwise a nice and unique piece of gadget with some useful apps. When SE comes back with official Gmail support, a boosted calendar app, and maybe some way of improving the on-board software, then we'd be more enthusiastic about this Bluetooth watch.

In this article: android, bluetooth, bluetooth watch, BluetoothWatch, cellphone, featured, features, liveview, mobile phone, MobilePhone, peripheral, phone, review, smartphone, sony ericsson, sony ericsson liveview, SonyEricsson, SonyEricssonLiveview, video, watch, watch strap, WatchStrap, wireless
All products recommended by Engadget are selected by our editorial team, independent of our parent company. Some of our stories include affiliate links. If you buy something through one of these links, we may earn an affiliate commission.