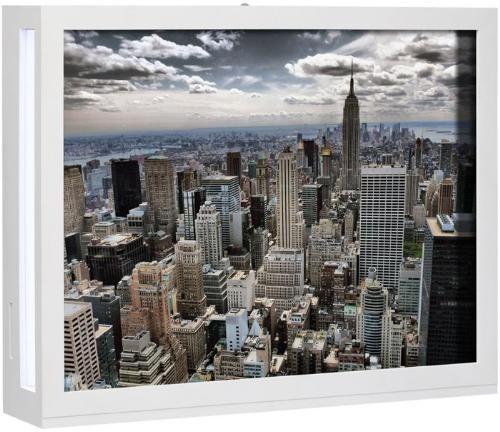 How do you a frame a digital photo without framing it? That's the mind-bending question considered by Parrot and the nodesign agency, and the "mysterious object" known as the DIA Parrot is their answer. Just what is it? We'll let Parrot explain.

What is striking is its 10x4 inch high resolution screen. Dismantled, deconstructed, disconnected from the frame as if there was nothing behind, this screen is transparency, is light. The picture, your photo, appears through this "light box" in a brand new aesthetic dimension...

"The photo frame designed by Jean-Louis Frechin is very mysterious," continues Henri Seydoux. "Jean-Louis was smart or 'crazy' enough to dismantle the LCD screen we get used to, and the result is quite simply magical. We don't see where the photo comes from... It is simply there, on this transparent and half-dismantled screen... It is prestidigitation!"

Look for it to set you back $500 when it launches in February. You didn't expect a brand new aesthetic dimension to come cheap, did you?

Show full PR text
DIA Parrot by nodesign: the Essence of Your Photos

With digital technology, we went from photo to photos... Taken with a camera or a mobile phone, digital photos are as fragile as sands of time, and yet we rarely take the time to watch them. We sometimes share them, via SMS or e-mail, but we never really see them...

Henri Seydoux and Jean-Louis Frechin found themselves considering this observation. Sharing the same love for photos, both are convinced by the necessity of the digital photo frame and consider that the object should be envisioned as a piece of furniture for which design is essential.

"I have my own idea of the function of the photo frame, and what motivates me in what I do is to create objects with high technology. I am looking for designers who have very personal ideas. I am not interested in design to rearrange a shape. I am looking for an expression, like a gesture, a movement," explains Henri Seydoux, founder and CEO of Parrot.

Your photos, only your photos

Due to its function, the photo frame is an object we look at, that we display prominently. While it is important the frame is beautiful, it is essential that the frame "steps aside" for the benefit of the photo.

"Today, screens are all the same. So, with my partner Uros Petrevski, we had to find a different type of screen, without falling into the category of 'do different just to be different'. We started to handle slide film, to dismantle screens, to play with transparency of light," explains Jean-Louis Frechin. "DIA frame was born from the idea that it is impossible to represent a printed image on a photo frame. So our frame is close to slide film, with the quality of transparency, and light and format of professional ektachrome."

DIA Parrot by nodesign is a white rectangle, very simple, with tactile buttons and a trackball to surf in the menu of the frame.

What is striking is its 10x4 inch high resolution screen. Dismantled, deconstructed, disconnected from the frame as if there was nothing behind, this screen is transparency, is light. The picture, your photo, appears through this "light box" in a brand new aesthetic dimension...

"The photo frame designed by Jean-Louis Frechin is very mysterious," continues Henri Seydoux. "Jean-Louis was smart or 'crazy' enough to dismantle the LCD screen we get used to, and the result is quite simply magical. We don't see where the photo comes from... It is simply there, on this transparent and half-dismantled screen... It is prestidigitation!"

In the manner of all products developed by Parrot, DIA Parrot by nodesign is a bundle of technology with poetic aesthetics.

* Holidays 2.0
Developed by Parrot, this application invites you to follow, via Google™ Maps, about 50 journeys to discover "as the crow flies" and with pictures the world's highest tops, the most beautiful natural cascades, Paris, New York, The Chateaux de la Loire, The descent of the Nile, Route 66, etc.
This application also enables you to create your own journeys thanks to the geographic tag (or geotag) embedded on the iPhone, Android mobile phones and some digital cameras. Upload your photos on the frame and they will appear once you fly over the country, the city or the street where your pictures were taken...


* Mover Lite©
DIA is compatible with "Mover Lite©" application from Infinite Labs (available for free on the App Store(SM)). Thanks to this application, you can select pictures and send them to the frame by simply sliding your finger on the iPhone screen.
Also, the Microsoft network client enables to drag-and-drop photos from a PC or a Mac®, directly to the frame.


DIA uses the Google Android™ operating system to connect to the Internet and the two USB ports enable connection a keyboard and a mouse to the frame.

* A Pop3 and Imap e-mail client enables an e-mail address on the DIA in order to send it photos.
* Sharing photos is possible via dedicated websites (Picasa™, Flickr®).

The digital photo frame DIA Parrot by nodesign will be available from February 2011 in department stores, specialized retailers and on www.parrotshopping.com for 500 USD.

DIA is the concrete expression of Wapix project, a digital photo frame designed by nodesign, which received the Carte Blanche du VIA award in 1998 and is featured as part of the modern and industrial art collection at the National Center for Art and Culture Georges Pompidou in Paris.

Parrot, a global leader in wireless devices for mobile phones, stands on the cutting edge of innovation. The company was founded in 1994 by Henri Seydoux as part of his determination to drive the inevitable breakthrough of mobile phones into everyday life by creating high-quality, user-friendly wireless devices for easy living. Parrot has developed the most extensive range of hands-free systems on the market for cars, motorbikes and scooters, including wireless multimedia products geared towards audiovisual applications. In 2008, Parrot launched a new prestige line of high-end products bearing the hallmark of renowned artists and in 2010, the AR.Drone, the first quadricopter piloted via wi-fi and using augmented reality.

®The Bluetooth word mark and logos are owned by the Bluetooth SIG, Inc. and any use of such marks by Parrot S.A. is under license. Other trademarks and trade names are those of their respective owners.

Android is a trademark of Google Inc. Use of this trademark is subject to Google Permissions.

SOURCE Parrot
In this article: design, dia, dia parrot, DiaParrot, digital photo frame, DigitalPhotoFrame, nodesign, parrot, photo frame, PhotoFrame
All products recommended by Engadget are selected by our editorial team, independent of our parent company. Some of our stories include affiliate links. If you buy something through one of these links, we may earn an affiliate commission.