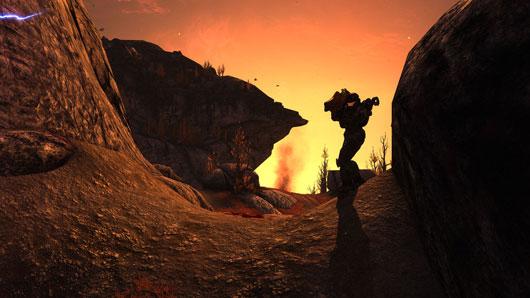 Halo: Reach
Was it just me or did Reach seem to have the quietest launch of any $200 million seller in history? Franchise fatigue has definitely set in for Halo, but it didn't stop Bungie from delivering its masterpiece. What this game lacks in variation, it makes up for in refinement of one of the all-time great first-person shooters. Reach may be lagging behind Call of Duty -- both Black Ops and Modern Warfare 2 -- in the Xbox Live numbers game, but its campaign is so much more epic. The Covenant are classic video game bad guys, and no one does enemy AI like Bungie. No one.

Amnesia: The Dark Descent
I have to admit, I haven't gotten very far in Frictional Games' Amnesia. I've stuck to playing in the dark when I'm home alone, and so I've only managed to complete a handful of ten-minute-or-so sessions. Mostly because this is the scariest game I've ever played. The first time I caught a fleeting glimpse of some kind of monster -- seriously, what was that?! -- lumbering down the hall and out of sight, I was paralyzed with fear, a sharp tingle running the length of my spine. With my mouse-hand quivering, I had no choice but to follow in its general direction toward the exit. I peeked around for a few moments as I tiptoed into the hallway I'd last seen it enter, and then I just sprinted -- clicking frantically on the door out! Back in another part of the creepy old castle, I immediately saved and quit. And then I got the lights back on.

Carcassonne (iPhone)
I like to keep my apps super-organized on my iPhone -- like, OCD-level organized -- so I've got a single page just for games, with a bunch tucked into folders and my current favorites on the top level. Since purchasing The Coding Monkeys' beautiful and intuitive version of Carcassonne for iPhone in late August, I've picked up nearly 40 other App Store games (according to a quick and surprising review I just did of my iTunes purchase history). What's significant is that Carcassonne had maintained the number one spot, right there in the top left, of my games' page until just recently, when it was finally bumped by the other iPhone game that made my list, below.

Enslaved: Odyssey to the West
I have to give props to Ninja Theory for really improving its product from Heavenly Sword (not a bad game, but not a very good one) to Enslaved, which isn't great, but definitely good -- with great acting. I'm curious to see if this relatively young developer can put out a top-tier effort in its next game, the Devil May Cry reboot for Capcom, since Enslaved seemed to fall just short in its potential to be a big hit for publisher Namco Bandai. This honest attempt at an engrossing single-player adventure is also noteworthy because it seems so representative of a dying breed. We're continuing to see the market for classic "story" games shrink, especially on a big-budget scale, and that hurts my heart. You really should play Enslaved.

Infinity Blade
So this is the one that finally sacked Carcassonne as my go-to iPhone game. I was extremely skeptical leading up to its release, sure that in its mission to herald the coming of Unreal Engine on iPhone, Infinity Blade would forsake a creative mobile gaming experience. Boy was I wrong! If there's one complaint that's been issued against this "console game on a phone" (ugh), it's that it's not a console game on a phone. Infinity Blade is designed for short bursts, even if you get sucked into playing for longer -- and only then do you really start to wonder "what if." That Chair has designed such a provocative gameworld in what boils down to a finger-flicking fighter is only further proof that sky's the limit for this studio that also brought us one of last year's best Shadow Complex. Someone give these folks a medal.

Need for Speed: Hot Pursuit
I haven't decided if Hot Pursuit is a throwback or step back in the genre, but it's unquestionably polished. Criterion has had my vote for the arcade racing developer since Burnout 3, and while there is a humdrum, almost sterile, quality to Hot Pursuit (it's certainly not as innovative as Split/Second, for example), Criterion has again executed a near-flawless racing game. Although I almost don't want to mention Autolog -- since EA has promoted it to death -- the built-in tracking system really is a great motivator for playing and re-playing events, old and new, until you top your friends leaderboard. Oh! And one other thing: I totally didn't see this coming (I'm not a car guy -- at all), but I've fallen hard for the inclusion of licensed vehicles. What a sucker.

Scott Pilgrim vs. The World: The Game
Best "movie game" of the year? Ubisoft nailed the old-timey brawler with this heavily retro-themed take on the Scott Pilgrim license. The nostalgia factor runs deep in this one, and I've zoned out for hours beating up the same Canadian hipsters (and their mean dogs) over and over again. But, damn you, Mr. Chau, won't you come back out and face me? I won't lose to you the next time.

Joystiq has revealed its 10 favorite games of 2010! Stay tuned to see those games that didn't quite make the cut in Joystiq's Best of the Rest series.
In this article: amnesia-the-dark-descent, best-of-the-rest-2010, carcassonne, enslaved-odyssey-to-the-west, halo-reach, infinity-blade, ios, iphone, mac, microsoft, mobile, need-for-speed-hot-pursuit, pc, playstation, ps3, psn, scott-pilgrim-vs-the-world, xbla, xbox
All products recommended by Engadget are selected by our editorial team, independent of our parent company. Some of our stories include affiliate links. If you buy something through one of these links, we may earn an affiliate commission.
Share
Tweet
Share