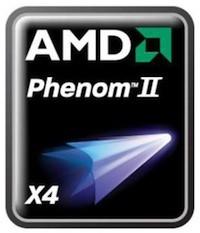 AMD's already gotten official with its Atom-challenging Fusion processors that promise a whole host of benefits for mobile users -- namely 10+ hour battery life and significantly improved GPU performance -- but the chipmaker isn't about to leave its desktop CPUs behind here at CES. The company has also just announced its new 3.6GHz Phenom II X4 975 Black Edition and 2.9GHz Phenom II X6 1065T processors, the former of which is AMD's fastest quad-core processor to date, while the latter promises to combine high performance with a low 95W TDP (relatively speaking), and AMD's own Turbo CORE technology. What's more, unlike the Fusion processors, these are apparently both available immediately, and they've already garnered a few early reviews. Hit up the links below to check a few of those out, and head on past the break for the official press release.

Why: The growth of high-definition and 3D digital media content has created a new level of immersive visual experience. The versatility of VISION Technology-based PCs creates almost limitless possibilities for consumers, such as moving to the Internet for video entertainment, creating lasting video and photo memories, playing the most visually intensive PC games, and improving performance when multi-tasking.

Who: Anyone looking for a new computer with multi-core value, versatile platform options, high definition video, and 3D graphics will benefit from a new PC with VISION Technology from AMD.

· Follow all news from the AMD desktop team on Twitter at @AMDDesktop
· Read more about Vision Technology from AMD at http://blogs.amd.com/home

Advanced Micro Devices (NYSE: AMD) is an innovative technology company dedicated to collaborating with customers and technology partners to ignite the next generation of computing and graphics solutions at work, home and play. For more information, visit http://www.amd.com.
In this article: amd, amd phenom II, AmdPhenomIi, ces, ces 2011, ces2011, cpu, phenom, phenom II, Phenom II X4 975 Black Edition, Phenom II X6 1065T, PhenomIi, PhenomIiX4975BlackEdition, PhenomIiX61065t, processor, processors
All products recommended by Engadget are selected by our editorial team, independent of our parent company. Some of our stories include affiliate links. If you buy something through one of these links, we may earn an affiliate commission.
Share
Tweet
Share