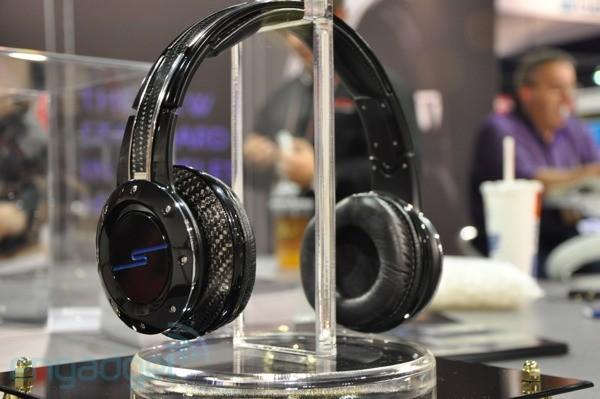 We spotted Sleek Audio's Platinum headphones when we interviewed 50 Cent yesterday, but we followed up with the company to see what more we could find out about the upcoming cans. We were bummed to learn that the only functioning pair at the show were the ones around 50's neck, but we got a full rundown of the deets from one of Sleek's reps. First off, these are 'Wireless Hybrid' headphones, which means they've got Kleer technology built in for 16-bit lossless, cordless streaming, though you can jack in a wire (with inline microphone) if you run out of juice. Each earpiece has music controls -- one handles play / pause, the other does volume -- and there's a microUSB charging port as well. We still couldn't squeeze out a release date, but we're told that they will probably be somewhere in the $350 to $400 range -- whether that includes the Kleer 3.5mm dongle is still unknown, though we'd hope it's included given that wireless is a standout feature. The company's promised us a pair as soon as they're available so we can get some real ears-on, but for now the carbon fiber eye-candy is all yours to enjoy. Bonus shot of the dongle after the break.

In this article: 50 cent, 50Cent, audio, cans, ces, ces 2011, ces2011, hands-on, headphone, headphones, kleer, music, sleek, sleek audio, SleekAudio
All products recommended by Engadget are selected by our editorial team, independent of our parent company. Some of our stories include affiliate links. If you buy something through one of these links, we may earn an affiliate commission.
Share
Tweet
Share