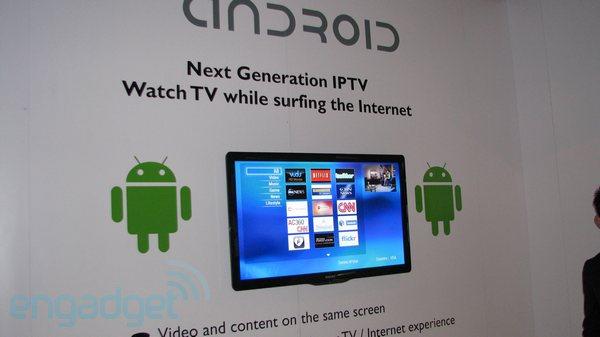 And here we were worried that Funai's takeover of the US arm would lead to a falloff. Whatever its name or corporate structure, Philips has brought plenty of US-bound heat to CES 2011, with none bigger than the news that we will see the company's sweet 3D-capable 21:9 ultrawidescreen HDTV on this side of the Atlantic in the second half of 2011. Today it also announced plans for a Blu-ray player with wireless HDMI, the world's first (meaning you'll probably need a dongle on any TV to use it until compatible displays arrive later in the year) but no surprise for an outfit that's been pushing HD streaming for some time. On a similar front its MediaConnect app on new TVs and Blu-ray players will let it stream anything playing on a PC to the TV screen WiDi-style (video embedded after the break.) Speaking of various streaming support, it's spread NetTV support (with built in WiFi N by default) across many of its 2011 models, and thanks to the inclusion of ActiveVideo's CloudTV, support for YouTube Leanback, Facebook and more can be easily added later on. If that's not enough, the company was also demoing an Android TV (like RCA, not Google TV.) In the hazy light of CES it all seemed pretty impressive, especially the 21:9 HDTV running 3D movie trailers even if it's been available in Europe for some time already.
In this article: 21:9, 21:9 cinema hdtv, 21:9CinemaHdtv, blu-ray, ces, ces 2011, ces2011, hdtv, lcd, led, philips, ultrawidescreen, usa, wireless hdmi, WirelessHdmi
All products recommended by Engadget are selected by our editorial team, independent of our parent company. Some of our stories include affiliate links. If you buy something through one of these links, we may earn an affiliate commission.
Share
Tweet
Share