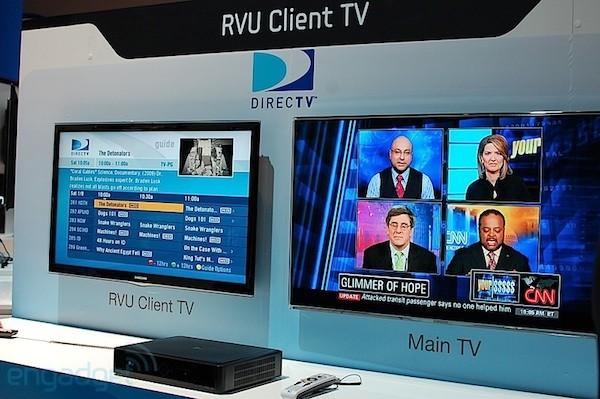 We've been coming to CES for years looking at demos of technologies that will let us watch HDTV without a set-top box, and yet here we are years later with little choice but to find a place to put that box. The big failures have been CableCARD and then tru2way, both of which have had little impact to mainstream America. But despite all of our disappointment over the years, we came away from CES this year with the feeling that this might actually be the year. Of course, the allure of Vegas has yet to wear off, but when Time Warner Cable, Comcast, DirecTV and Verizon FiOS TV are at the same show sending almost the same message and showing demos, we have a hard time not taking our skeptical shield down a little. Sadly it wasn't exactly the same message, and if you click on through you might discover the true future of how TV will be delivered. We control the user experience

Unlike the attempts we've seen in the past, at CES this year there were a number of ways TV manufactures and cable companies figured out to bring HD to the TV without a set-top box. The commonality between the methods was that the provider will create and control the user experience on the TV. This means that no matter what type of TV you buy, the user interface will look the same. This can a good thing, but if you don't like your provier's set-top box, then there's a good chance you won't like this either. But even if you couldn't care less about how the interface looks, there are a few other annoyances that might make this a less than ideal solution. One example is seeing channels in the guide and search results that you don't subscribe too. The providers see this has a great way to advertise their content, and while we do appreciate that, and we don't mind seeing all the channels at first, not being able to opt-out after we've made our programming decisions as a consumer is as bad as a spammer who won't remove you from their list. So in other words, these revelations probably won't help you much if you're a TiVo or Windows Media Center fan, and your hoping to get access to more content on your box of choice. The hub and spoke versus the cloud

The approach that both Time Warner Cable and DirecTV were taking was the client server model. The TV has a built-in client and connects via the home network to a DVR acting as a server. DirecTV is a founding member of the RVU Alliance and was showing a five-tuner DVR that's expected to ship in the next six months -- it was originally promised during the first half of last year -- that in addition to its normal DVR duties, can support the exact same user experience on three other Samsung HDTVs at the same time. For what it's worth, DirecTV will also make a thin client for those without the latest Samsung HDTV. TWC's demo also connected the TV to the DVR via the home network, but used DLNA's RUI to render the user interface, which actually looked much better than any TWC software we've seen. The DVR in the demo feeding the TV was dual tuner Samsung, but hopefully models with more tuners are coming.

Verizon wasn't actually pimping its hub and spoke model, but at the Entropic Communications booth, Jethead was showing the fruits of Verizon's founding membership in the RVU Alliance in a demo. Verizon instead was sharing the benefits of a cloud based IP delivery which doesn't depend on a local DVR. The great thing about Verizon's demo is the software was running on a Samsung Blu-ray player and Verizon expressed the interest to port its TV application to every platform. Obviously, there is no way it could actually be ported to every device, but the promise of being able to watch all of our programming on every screen is very appealing.

TWC was also taking this dual approach, and was showing an app on Samsung sets that served content from the cloud via IP. Comcast's solution also used a Samsung app to deliver video-on-demand content from the cloud, but also could render a guide and other content in the app and would control the DVR via HDMI-CEC to change the channel or play back a recorded TV show. The common thread here was Samsung, and while there were other manufacturers like Sony and Panasonic partnering up, Samsung was the only one with working demos of them all at its booth. We'd expect that once the floodgates open, we could see cable company apps on all types of devices, maybe even a TiVo or on one of the new Windows Media Center embedded boxes.

The future of TV

The one thing we do know is that the future of TV will be a mixture of technologies and delivery methods, which is another reason why we're usure how successful these approaches will be. The problem is that they fragment our content and create silos, each housed within its own application. TiVo, Google and Microsoft's approach seems more sound because they each attempt to aggregate all the sources into a single universally searchable interface. The cable companies have expressed their hatred for this approach, claiming it undermines their business and devalues their product. All that being said, we do think this could be a great step in the right direction towards consumer choice in both hardware and software, but remain somewhat skeptical until some of these companies actually deliver.

In this article: ces, ces 2011, ces2011, Comcast, DirecTV, DlNA, DLNA RUI, DlnaRui, Panasonic, RVU, RVU Alliance, RvuAlliance, Samsung, Sony, Time Warner Cable, TimeWarnerCable, TWC, Verizon, Verizon FiOS TV, VerizonFiosTv, Xfinity
All products recommended by Engadget are selected by our editorial team, independent of our parent company. Some of our stories include affiliate links. If you buy something through one of these links, we may earn an affiliate commission.
Share
Tweet
Share