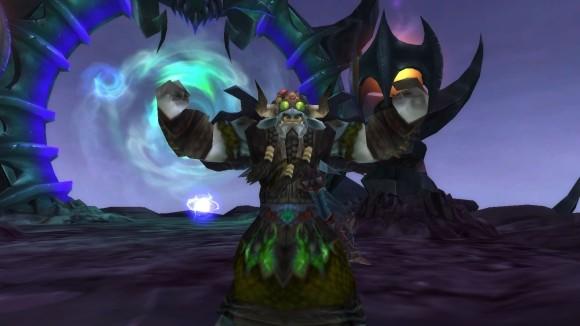 Every week, WoW Insider brings you Totem Talk for elemental, enhancement, and restoration shaman. Do your likes include bladed weapons, the elements, and fights with little to no movement or target switching? So does Josh Myers, new kid on the block and now host of Totem Talk: Enhancement!

Few things in Azeroth spawn more debate than racial choices. Some sides argue that if you don't min-max your racial choices, you're the reason your guild hasn't downed heroic Lich King, while the other side maintains that if you're playing a character for three hours a day, it should at least look appealing to you. Personally, my view is that everyone should be a tauren, but I'm an outlier in the great race debates. This issue of Totem Talk will be focusing on racials as used by enhancement shaman, using the redesigned racials in patch 4.0.6. This is purely for information purposes; I don't want anyone loading in to Azeroth feeling ashamed at their racial choice. Unless they chose male draenei.

Let's drink to the dwarves

Dwarves are known for their small stature and their ability to imbibe massive amounts of ale without alcohol poisoning. Now, for $25 or 3+ weeks /played time, you can make one of these pint-sized powerhouses of your very own. They'll slash, they'll cast, they'll stand nearly as tall as a human character's waist. And they'll bring unique new racial combinations to the fold that shaman have never had access to before.

Prior to patch 4.0.1, dwarves possessed Find Treasure, a unique ability that allowed them to locate treasure on their minimap. This racial was as useless as the white-quality items often found in said treasure chests (who keeps Ice Cold Milk in a locked chest, anyway?) and has gone the way of the dodo. In its place we have Explorer, which provides a bonus to archaeological fragments found and a faster pace of digging. Since archaeology is a secondary profession everyone can learn, provides rewards that you earn for your entire account, and is generally a pain to level, I'd rate this over the draenei's Gemcutting, a 15-point bonus to jewelcrafting.

The surly stout folk and the spacegoats

Like most other races in the game, dwarves get a passive bonus to a resistance. This Frost Resistance is situationally useful and should not really factor in on your race choices (unless your singular goal as an enhancement shaman is to hunt down and defeat every frost mage on the server -- to each his own!).

Beyond that, dwarves get 1% more chance to critically hit with guns, a racial whose usefulness is lost on 9 of 10 classes in the game. The bearded folk also receive 3 free expertise whenever wielding a mace, which is theoretically excellent. Cookie's Tenderizer's 2.8 speed makes it nearly comparable to epic off-hands to begin with, and this racial might push it over the edge. Conversely, though, the only 2.6 speed agility maces in current content are blue, meaning this racial will see less use once you start raiding. If your goal is PvP (or you have access to the agility one-handed PvP maces and no comparable PvE weapon), this racial could be a real boon. In comparison, draenei's Heroic Presence affords them 1% hit -- something that is useful in every aspect of the game. Dwarves are the lesser race here.

The last dwarven racial is Stoneform. As soon as 4.0.6 hits, this clickable ability will decrease damage taken by 10% for 8 seconds while removing all bleeds, poisons, and diseases from the player. (Stoneform is also hinted at being the reason dwarves don't suffer from alcohol poisoning despite being 4 feet tall, but they'll never tell.) Deathwing recently shattered every cleansing totem on Azeroth and exchanged our ability to dispel poisons and diseases for curses, and Stoneform helps fill in the gap left in their absence. It will be a benefit when fighting pesky rogues, death knights, and warriors. For PvE, Stoneform will be useful in situations that those debuffs are present, saving healer mana. The 10% damage reduction will provide a small benefit any time you're going to take damage, which is almost always in current content.

Gift of the Naruu, the squidface HoT clickable racial, heals for 20% of your hit points over 15 seconds. It won't save your life, but if you're sitting at 80% health and have some breathing room to heal, calling out that you're using it on Vent could save your healers a cast or two. Stoneform still wins out in 4.0.6, but the difference is much less dramatic than it was in 4.0.1 thanks to the Gift buff.

Overall, dwarves are the better Alliance-side choice for enhancement shaman who are competitive PvPers. With the ability to choose what type of weapon to wield, allowing them to benefit from their 3 expertise, and an excellent defensive cooldown in Stoneform, the Wildhammer Clan outshines the extraterrestrials in every way. However, based on the lack of one-handed maces on known loot tables and the fact that both races have useful healer mana conservation tools, draenei edge them out very slightly with a passive 1% hit in PvE. If your goal is to min-max to your fullest, draenei is likely the way to stay. If your goal is to have fun smashing boss toes in a drunken rage while rocking competitive PvP racials, go dwarf or go gnome. (I wish.)

On the Horde side of the game, four races can be shaman ... and only two of them are cool. Tauren, goblin, orcs, and trolls all can follow the shamanistic way . None of these races are currently on the receiving end of racial changes in 4.0.6 yet, but one can hope for the rise of tauren supremacy!

In terms of passive buffs, orcs win out for the fourth expansion in a row. Blizzard has taken pity on their low intelligence and poor fashion sense and given them two excellent passive racial abilities, Command and Axe Specialization. Command gives a 5% damage bonus to anything with a pet bar, including your trusty canine cooldown companion. Axe Specialization gives you 3 expertise for wielding an axe or a fist weapon, which are the only weapon types that drop in current raid content for enhancement shaman. You can pretty much count on always needing 451 expertise instead of 541 if you're playing an orc. For PvP, the stun-reducing racial is nice as well. It might also help on bosses who stun, like Halfus Wyrmbreaker.

Tauren instead get the ability to pick flowers super-quickly through Cultivation. If you're an herbalist who farms a lot, this racial is amazing. For any form of content that isn't agriculture, it is less amazing. Tauren also get Endurance, a slight stamina increase, and Nature Resistance. Both of these are good for PvP but have less application in PvE.

Trolls have it slightly better. Bow Specialization is weak for non-hunters, and Throwing Specialization is weak for every class in the game. Da Voodoo Shuffle is excellent for PvP but less useful in PvE, where most slows are applied in an area. Regeneration just isn't noticeable. Finally, trolls have Beast Slaying, a 5% damage bonus to beasts that is really situational -- but it's a boon to have on Chimaeron or on Beauty and her pups, as my clever commenters pointed out last week!

As for the tiny, Yoda-shaped enhancement shaman, there is only one passive racial that is useful in PvE or PvP, a 1% haste buff in Time is Money. As haste competes with critical strike for "worst secondary stat of the expansion," orc racials clearly beat goblin racials for DPS purposes. For quality of life, however, the 15 skill increase in the second-coolest profession in the game from Better Living Through Chemistry is a nice boost. Also, the lowest price on everything that goblins get is a great money-saver if you often buy things from people who don't like you. Finally, Pack Hobgoblin gives you access to your bank from anywhere in the world on a 30-minute cooldown; not a deal-breaker, but nice to have.

In terms of clickable abilities, orcs continue to dominate through pure DPS with Blood Fury, a usable attack power boost that has the same cooldown as Feral Spirits, useful for both PvE and PvP. Taurens rock PvP with War Stomp, a 2-second, point-blank AoE stun that also provides amazing utility on heroic trash.

Goblins come in third with their 2-minute cooldown Rocket Jump/ Rocket Barrage combo. For a straight-up DPS fight, Rocket Barrage comes in useful. For any fight in which you have to move away from the boss, Rocket Jump is excellent. The lack of targeting makes it less useful for getting back on the boss after moving, though.

Trolls come in dead last, as Berserking is a DPS cooldown that uses our absolute worst stat. They're fine for PvE and second on the PvE DPS train, but the lack of utility that they offer makes them only worthwhile if you want to min-max, in which an orc would be better anyway.

In order of best sustained DPS racials, assuming optimal conditions:In order of best utility racials:In the end, orcs are the best choice for enhancement if you're absolutely focused on min-maxing your damage; just be prepared to look like a vapid oaf as a trade-off. Tauren, dwarves, and goblins are all solid PvP choices that also provide situational utility in PvE content at the cost of damage potential. Draenei and trolls both offer some increases to PvE DPS but come with faces only a mother could love.

Every race brings something to the table for enhancement, so it realistically comes down to whether you want to be a brave bovine defeating the forces of evil with an iron hoof or a holier-than-thou spaceman with an Eastern European accent. The choice is yours.