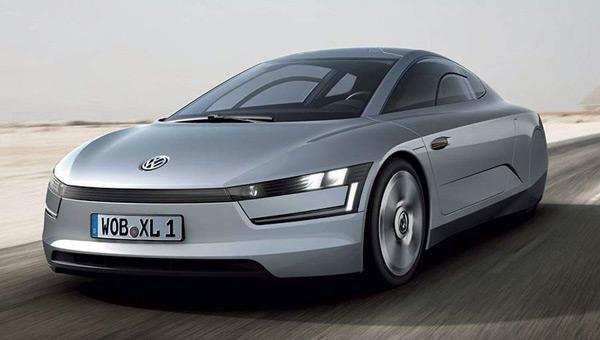 Steaming down the autobahn could be about to get a whole lot more efficient. Volkswagen has carted out its newly updated Super Efficient Vehicle concept, now dubbed the XL1, which -- after a great deal of fuzzy math, we're sure -- is rated at a 313MPG fuel efficiency and produces only 24g of CO2 per kilometer traveled. There's an electric motor and a TDI diesel engine making all the buzzing and roaring noises inside, while the overall body design is focused on making the car as light and as aerodynamic as possible. Volkswagen has achieved a 795kg curb weight by using carbon fiber, magnesium, ceramics, and aluminum to shave down any excess portliness from the XL1, while wind-tunnel testing and optimizations have resulted in a rather exemplary 0.186 drag coefficient. It's rare to see such attributes on anything outside the supercar realm, but then there's a reason why this PHEV is still only a concept. FOF.

Update: Oh bother. Turns out Volkswagen's mileage claim is based on Imperial gallons, which are 1.2 times the size of the American stuff, meaning that the XL1 actually measures in at 260MPG when viewed through US glasses. Now do you see why the rest of the world has gone metric?

The new Volkswagen XL1 Super Efficient Vehicle (SEV) has been unveiled at the Qatar Motor Show. Pioneering construction techniques, an advanced plug-in hybrid drivetrain and innovative packaging all play a part in allowing the XL1 to return 313 mpg on the combined cycle while emitting 24 g/km of CO2 to set a new benchmark for vehicle efficiency.

Powering the XL1 is a compact 800 cc TDI two-cylinder common rail diesel engine developing 48 PS. It's linked to an electric motor producing 27 PS, resulting in a total of 75 PS – a modest output yet more than enough when the low kerb weight (795 kg) of the vehicle is taken into account.

The TDI engine is linked to an electric motor and a seven-speed DSG gearbox with an automatic clutch mounted between each unit. The electric motor can either work independently of the TDI engine or in tandem when accelerating. In pure electric mode the XL1 can travel up to 35 km before the diesel engine cuts in. Accelerating from rest to 62 mph can be achieved in 11.9 seconds; the electronically limited top speed is 99 mph.

In both its styling and packaging the XL1 draws on lessons learned from the 1-Litre car (2002) and the L1 concept (2009). The XL1 has evolved to feature staggered seating with the driver and passenger placed next to each other in a body structure made from advanced new materials providing immense strength yet weighing just 230 kg.

To make such weight savings possible, and yet viable for series production, Volkswagen developed and patented a new system for the manufacture of the Carbon Fibre Reinforced Polymer (CFRP) parts on the car called the Resin Transfer Moulding (RTM) process.

Further savings are made through the extensive use of lightweight materials including magnesium (wheels), ceramics (brake discs) and aluminium (dampers, steering system, brake calipers).

The styling of the XL1 is borne out of functional requirements – easy access to the interior is granted via a pair of elegant scissor doors that hinge on the A-pillar while the profile of the car has been honed in the wind tunnel, the result being a remarkable coefficient of drag figure of 0.186. The XL1's overall length (3,970 mm) and width (1,682 mm) are similar to those of a Volkswagen Polo yet its height (1,184 mm) is more akin to that of a Lamborghini Gallardo Spyder.

Although the XL1 is still very much a concept, its unveiling marks the next step towards the birth of a new class of Super Efficient Vehicles, while the advent of a process such as RTM is a significant milestone.