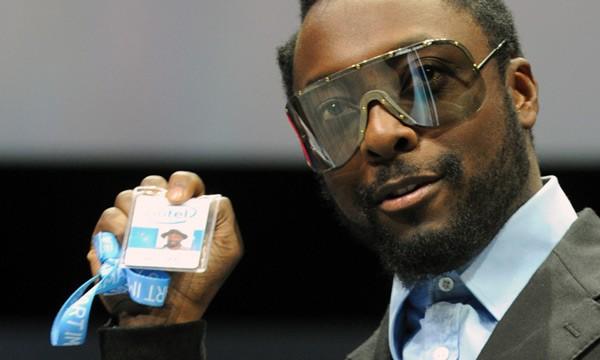 You know a job title is tenuous when even the guys who announce it have to put it in quotation marks -- Intel's just signed up the Black Eyed Peas' Will.i.am as a "director of creative innovation." The hip hop star responsible for flooding CES 2010 and every BlackBerry event since with an irritatingly cheery tune (which we're sure we don't have to name) is about to commence a long-term, "hands-on" collaboration with Intel on its development of "new technologies, music and tech advocacy." Basically, it sounds like he'll act as an ambassador for the chip company, who'll in turn pretend to listen to his zany ideas about mega-giga-bass. Then again, Lady Gaga's similar partnership with Polaroid produced these glasses, so what the hell do we know?


ANAHEIM, Calif., Jan. 25, 2011 – He's best known for being a multi-platinum music artist, producer and front man for The Black Eyed Peas, but will.i.am is also an innovator, technology fan, entrepreneur and philanthropist. With today's announcement at the Anaheim Convention Center, the seven-time Grammy winner has added another title to his multi-faceted resume: "director of creative innovation."

As an extension of his insatiable fascination with technology, which plays a significant role in his professional and personal lives, will.i.am will engage in a multi-year, hands-on creative and technology collaboration with Intel Corporation. He already sports an Intel ID badge, which he proudly showed off at a news conference in Anaheim, where Intel is holding an internal sales and marketing conference.

"Nearly everything I do involves processors and computers, and when I see an Intel chip I think of all the creative minds involved that help to amplify my own creativity," said will.i.am. "Teaming up with the scientists, researchers and computer programmers at Intel to collaborate and co-develop new ways to communicate, create, inform and entertain is going to be amazing."

Added Deborah Conrad, Intel vice president and chief marketing officer: "We're thrilled to tap into the limitless creativity will.i.am brings to the table. He's not only a brilliant artist and producer, but also an innovator pushing the bounds of technology professionally and personally. We share a strong interest in innovation around music, art and lifestyle, and are excited to join forces to establish an authentic, emotional connection with consumers.

The relationship ties in with Intel's "compute continuum" vision, in which more and more devices will compute and connect to the Internet, and the company's "visual life" initiative that explores how visual experiences such as photos, videos and movies are redefining the relationship consumers have with laptops, smart phones, tablets and other devices.

In his unique role, will.i.am will collaborate with Intel on many creative and technology endeavors across the "compute continuum" that may include such devices as laptops, smart phones and tablets. Complementing his visionary role as the front man for The Black Eyed Peas, will.i.am is also already working on music expressly for Intel.

Specifics haven't been disclosed, but Conrad said that the partnership between will.i.am and Intel is the marrying of two worlds -- entertainment and technology -- in order to create what she calls "the ultimate experience."

"Intel is in the midst of transforming the way we communicate with people," Conrad said. "Our partnership with will.i.am is a prime example of how we want to convey and deliver the Intel experience. It's imperative that Intel and our innovations are kept in front of the global youth culture that embraces new devices and new forms of communication and entertainment."

In this article: black eyed peas, BlackEyedPeas, collaboration, crazy, director, innovation, intel, job, will.i.am
All products recommended by Engadget are selected by our editorial team, independent of our parent company. Some of our stories include affiliate links. If you buy something through one of these links, we may earn an affiliate commission.
Share
Tweet
Share