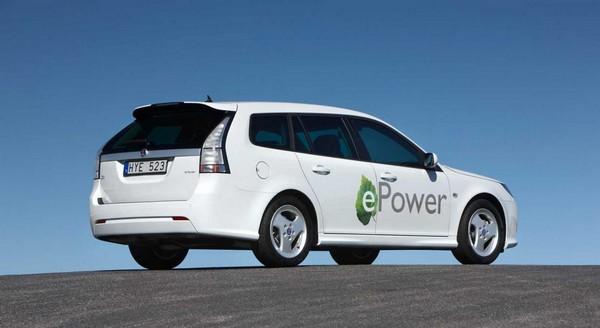 Saab announced it was working on an all-electric version of its 9-3 wagon late last year, dubbing it the ePower. Now we're learning what's driving it. The vehicle will be powered by a 135kW UQM Technologies PowerPhase system, an equivalent of 181hp that will propel the car to 60 in 8.5 seconds -- no Huayra but pretty peppy for an EV. Top speed is 93mph and the car's range is expected to be 200km, or about 125miles. Interestingly Saab is eschewing more advanced water-cooled battery tech, like that found in the Volt or Model S, and going for an air-cooled design, despite even the classic 93 of the '50s being water cooled. The company has indicated this will cut costs and promises the battery will still operate at full power even when temperatures drop below -22F. We'll find out soon, as early cars are set to hit Swiss roads sometime in the coming months.

Saab 9-3 ePower test fleet of 70 vehicles will be powered by UQM Technologies electric motors and controllers
Deliveries of PowerPhase 135kW systems to Saab began in Q3 of CY 2010
These electric propulsion systems for the Saab 9-3 ePower vehicles were previously announced by UQM as an order from an international OEM
UQM has in place validated production lines for its PowerPhase 100 and 135kW systems with annual capacity of 40,000 systems
LONGMONT, Colo.--(BUSINESS WIRE)--UQM Technologies, Inc. (NYSE Amex: UQM), a developer of alternative-energy technologies, has been selected by Saab to power its all-electric Saab 9-3 ePower development test fleet. Initial deliveries began in the third calendar quarter of 2010 and will continue through CY 2011.

"Our history of technological innovation in developing electric propulsion systems combined with extensive production engineering capabilities gives us a unique advantage in meeting the development and production needs of vehicle manufacturers."
"This order from Saab reinforces our ability to meet the performance, quality and cost needs of international automobile companies developing electric and hybrid vehicles," said Eric Ridenour, President and CEO of UQM Technologies. "The PowerPhase 135kW systems for Saab are being built on our validated production lines with annual capacity of 40,000 systems. These production lines are among the many steps we have taken to fully prepare UQM to grow from test-fleet programs to production fulfillment."

The UQM PowerPhase 135 kW electric propulsion systems will power the 70 Saab 9-3 ePower test fleet vehicles. The 9-3 ePower program is the first step towards developing a potential Saab production vehicle. The PowerPhase 135kW features a power-dense 135 kW/181 hp electric motor and advanced control system. Saab will use our propulsion system with a single-speed transmission, and the company has published performance estimates of 100 km/hr (62 mph) acceleration in just 8.5 seconds together with a top speed of 150 km/h (93 mph). Saab will begin field trials of the test fleet in Sweden early this year.

"We are looking forward to working with Saab through its automotive testing and qualification program with our PowerPhase electric propulsion system," said Ridenour. "Our history of technological innovation in developing electric propulsion systems combined with extensive production engineering capabilities gives us a unique advantage in meeting the development and production needs of vehicle manufacturers."

Saab, or Svenska Aeroplan Aktiebolaget (Swedish Aircraft Company), was founded in 1937 as an aircraft manufacturer and revealed its first prototype passenger car 10 years later after the formation of the Saab Car Division. In 1990, Saab Automobile AB was created as a separate company, jointly owned by the Saab Scania Group and General Motors, and became a wholly owned GM subsidiary in 2000. In February 2010, Spyker Cars N.V. of the Netherlands, acquired the company from GM as an independently-run business.

Saab cars reflect the brand's unique Scandinavian design ethic, which is fused with its aircraft engineering heritage. The company is a global premium car maker with a distinguished history of innovation. It is recognized for its pioneering role in turbocharging, as well as occupant safety and the introduction of flex-fuel technology through Saab BioPower. Saab Automobile AB currently employs approximately 3,800 staff in Sweden, where it operates world-class production and technical development facilities at its headquarters in Trollhättan, 70 km north of Gothenburg.

This Release contains statements that constitute "forward-looking statements" within the meaning of Section 27A of the Securities Act and Section 21E of the Securities Exchange Act. These statements appear in a number of places in this Release and include statements regarding our plans, beliefs or current expectations, including those plans, beliefs and expectations of our officers and directors with respect to, among other things, orders to be received under our supply agreement with CODA Automotive, our ability to successfully expand our manufacturing facilities, and the continued growth of the electric-powered vehicle industry. Important Risk Factors that could cause actual results to differ from those contained in the forward-looking statements are contained in our Form 10-Q filed today, which is available through our website at www.uqm.com or at www.sec.gov.

In this article: 9-3, 9-3 sportcombi, 9-3Sportcombi, electric motor, electric vehicle, ElectricMotor, ElectricVehicle, ev, motor, saab, sportcombi, station wagon, StationWagon, uqm, uqm technologies, UqmTechnologies, wagon
All products recommended by Engadget are selected by our editorial team, independent of our parent company. Some of our stories include affiliate links. If you buy something through one of these links, we may earn an affiliate commission.
Share
Tweet
Share