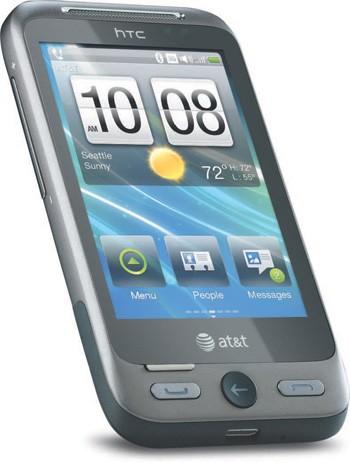 It's not going to steal any thunder from its Inspire 4G big brother -- but if you're looking for an HTC that doesn't run Android or Windows Phone 7, your wait is nearly over on AT&T (though you won't be saving any money in the process). The Freestyle was announced back at CES last month, the first device in AT&T's lineup to run Qualcomm's Brew MP feature phone platform with a 3.2-inch display, full HTML browser, 3.2 megapixel camera, 3.5mm headphone jack, microSD compatibility up to 32GB, and a familiar Sense UI experience ported from HTC's smartphone devices (and first seen in Brew MP guise on the Smart last year). Look for it to land in stores this coming Sunday, February 13th for $99.99 on contract after a $50 mail-in rebate; considering that the Inspire goes for the same price, we don't think that makes a lick of sense, so we wouldn't be surprised to see that price fall a bit in the next few months. Follow the break for the full press release.

The HTC Freestyle features a premium design with a 3.2-inch touch screen display clad in an aluminum unibody construction. It is also the first quick messaging phone to feature the HTC Sense experience with customizable widgets and FriendStream™ app for social networking integration, a full HTML browser and 3.2-megapixel camera.

HTC Freestyle™ will cost $99.99 after a two-year contract and $50 mail-in rebate beginning Feb. 13 in AT&T company owned retail stores and online. Requires an unlimited messaging plan. Qualified customers only. HTC Freestyle™ is configured to work only with the wireless services provided by AT&T.

"We are excited to add HTC Freestyle to our popular quick messaging device portfolio," said Jeff Bradley, senior vice president, Devices, AT&T Mobility and Consumer Markets. "Between the HTC Sense experience, a multitude of apps through Brew MP and its top-notch construction, the Freestyle is sure to make a splash with customers."

"With the HTC Freestyle, HTC is pleased to be supporting AT&T's drive to bring new, enhanced capabilities to their lineup of customer-friendly quick messaging phones," said Jason Mackenzie, president of HTC Americas.

1: Limited time offer. Two-year contract required. Qualified customers only. Other restrictions apply. See contract for details. Early Termination Fee up to $150. HTC Freestyle requires an unlimited messaging plan. Sales tax calculated based on price of unactivated equipment. Price for HTC Freestyle before AT&T Promotion Card & with 2 year contract and minimum $20 Messaging Plan is $149.99. Allow 60 days for fulfillment. Card valid for 120 days wherever major credit cards accepted. May be used to pay wireless bill. Not redeemable for cash and cannot be used at ATMs or gas pumps. Some restrictions and other charges apply. See terms at store or at att.com/wirelessrebate. Card request must be postmarked by March 14, 2011 if purchased on or before February 14, 2011 or May 4, 2011 if purchased between February 15 - April 4, 2011 and you must be customer for 30 consecutive days to receive Promotion Card.

About HTC
HTC Corporation (HTC) is one of the fastest growing companies in the mobile phone industry and continues to pioneer industry-leading mobile experiences through design, usability and innovation that are sparked by how the mobile phone can improve how people live and communicate. The company is listed on the Taiwan Stock Exchange under ticker 2498. For more information about HTC, please visit www.htc.com.

About AT&T
AT&T Inc. (NYSE:T) is a premier communications holding company. Its subsidiaries and affiliates – AT&T operating companies – are the providers of AT&T services in the United States and around the world. With a powerful array of network resources that includes the nation's fastest mobile broadband network, AT&T is a leading provider of wireless, Wi-Fi, high speed Internet and voice services. A leader in mobile broadband, AT&T also offers the best wireless coverage worldwide, offering the most wireless phones that work in the most countries. It also offers advanced TV services under the AT&T U-verse® and AT&T | DIRECTV brands. The company's suite of IP-based business communications services is one of the most advanced in the world. In domestic markets, AT&T Advertising Solutions and AT&T Interactive are known for their leadership in local search and advertising. In 2010, AT&T again ranked among the 50 Most Admired Companies by FORTUNE® magazine.
In this article: att, brew mp, BrewMp, freestyle, htc, htc freestyle, HtcFreestyle
All products recommended by Engadget are selected by our editorial team, independent of our parent company. Some of our stories include affiliate links. If you buy something through one of these links, we may earn an affiliate commission.
Share
Tweet
Share