One of the worst-kept secrets of MWC this year -- the Galaxy S II -- is finally official, and we'd say it definitely lives up to its name as a proper successor to the original Galaxy S that lit the Android marketplace on fire last year. Major (and largely expected) features include a 4.27-inch 800 x 480 Super AMOLED Plus display, an 8 megapixel primary camera with 1080p video capture accompanied by a 2 megapixel cam up front, Gingerbread with TouchWiz 4.0, integrated NFC support (on some versions), and a shell measuring just 8.49mm thick, making it likely the thinnest smartphone ever to roll off an assembly line -- in fact, it's over 0.2mm slimmer than the Sony Ericsson Xperia Arc's thinnest point. The biggest news here, though, might be that Sammy's going with an NVIDIA Tegra 2 core -- the same as the LG Optimus 2X, Motorola Atrix 4G, and Droid Bionic -- despite the fact that its own Exynos 4210 was just announced for March production.

Update: We were originally told that the Galaxy S II would be using an NVIDIA Tegra 2 SOC, but have been informed that was incorrect -- the phone will indeed have a dual-core 1GHz Samsung chip, and quite possibly the Exynos. There's also 1GB of RAM.

We were able to spend a little bit of time with the Galaxy S II today, and we can conclusively say that this is one gorgeous device. It shares the Infuse 4G's aspirations as an ultra-thin Android device and arguably shares most of its industrial design elements, but interestingly, the Infuse steps down from 4.5 to 4.3 inches -- either a nod to the fact that 4.5 is too big for a mainstream smartphone, or a sign that the 4.5-inch Super AMOLED Plus component simply isn't ready yet. You totally notice how ridiculously thin the phone is as it rests in your hand, and the effect is amplified by the fact that it's got so much surface area -- the screen-to-edge ratio is off the charts. Though we still prefer the stock Android experience, TouchWiz 4.0 (as it's being called) on top of Gingerbread is clearly Samsung's most refined custom Android skin to date; a new Game Hub in ROM has potential to do battle with Sony's PlayStation Suite and allows developers to bypass the download size limits of the Android Market, but we weren't able to test it on the preproduction unit we were given.

Owing to a lack of time and connectivity, we weren't able to put the phone through a suite of speed tests, but the entire UI felt perfect fast and smooth, a testament to the processor's chops. As at CES, we were blown away by the clarity and brightness of the Super AMOLED Plus display -- picture the already-excellent Super AMOLED technology amped up on steroids, and you'll have a good sense of what we're talking about here. All told, this seems like a great upgrade to the Galaxy S; if anything, we're a little concerned that it's going to be a smidge too big for people that were perfectly happy at the 4-inch tier, but odds are good Samsung will continue to crank out smaller devices for those folks. It'll be on the market in parts of Europe and Asia as soon as this month; no word on North America, but as always, there's little doubt Samsung has some plans in the works. Follow the break for our quick video and the full press release. 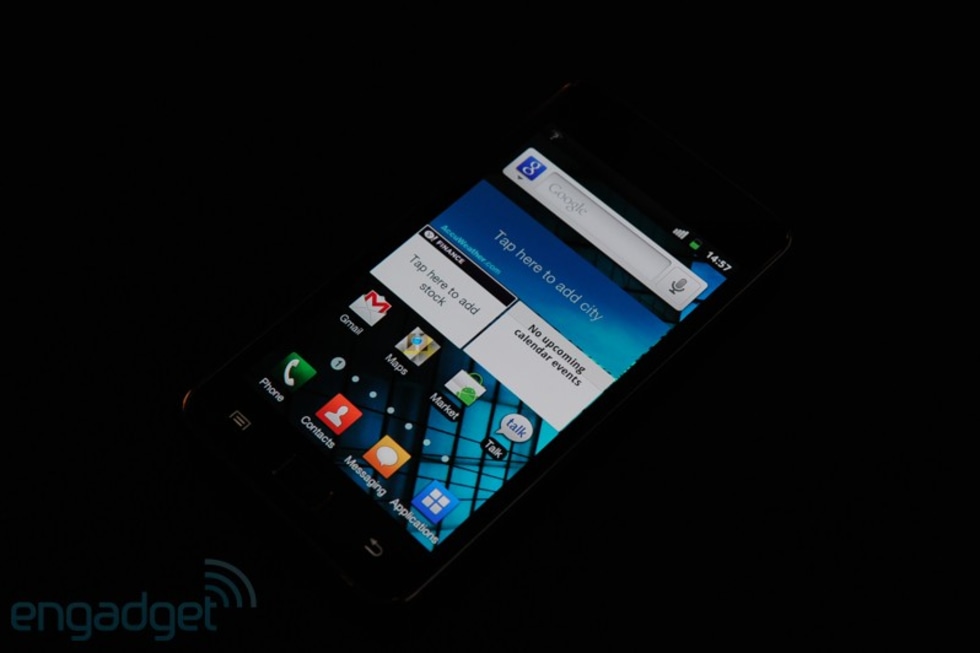 "In 2011, we will take Samsung's leadership in Speed, Screen and Content to a whole new level," said JK Shin, President and Head of Samsung's Mobile Communications Business. "With the GALAXY S II, Samsung wants to set the new standard of quality viewing on mobile, powerful performance, and slim and modern design."

"GALAXY S II is a natural and powerful evolution of GALAXY S. Building on the phenomenal success of the original Samsung GALAXY S, we are proud to unveil the ultimate smartphone. Consumers no longer have to contain themselves – the Samsung GALAXY S II allows them to design their own smart lives."

The Samsung GALAXY S II has been equipped with an 8MP, high-profile camera and camcorder with 1080p full HD recording and playback. With Samsung's patented AllShare technology, customers can capture, create and then share their experiences hassle-free.

A Next Level of Viewing Experience

The Samsung GALAXY S II has been equipped with Samsung's new crystal-clear Super AMOLED Plus screen, the most advanced mobile visual display ever created. Setting the standard of quality viewing on mobile, Super AMOLED Plus introduces the best in quality in color gamut, contrast ratio and edge sharpness. Using RealStripe screen technology and a greatly increased sub-pixel count, Super AMOLED Plus complements the mechanics of the human eye to recognize images look clearer and more detailed than ever before. With a wider viewing angle and increased visibility in outdoor, the Samsung GALAXY S II provides a more vibrant viewing experience than any other mobile devices.

Even with its unrivaled performance, the innovative Super AMOLED Plus display does not compromise battery performance. A significant reduction in power consumption from Super AMOLED display means it is also more energy-efficient than other comparably-sized devices, allowing Samsung to minimize device weight.

Samsung has introduced a new range of enterprise mobility solutions, expanding the business capabilities of the Samsung GALAXY S II and helping enterprise customers empower a flexible and connected mobile workforce. Samsung has partnered with IT industry leaders to offer the most relevant enterprise solutions to the Samsung GALAXY S II, working seamlessly on the Android Gingerbread platform and paying special attention to securing data and network. These solutions include enhanced conferencing and connectivity services from Cisco, the most comprehensive mobile implementation of Microsoft Exchange ActiveSync and secure remote device management from Sybase.


A New World of Entertainment and Smarter Interaction

Samsung has selected the Samsung GALAXY S II as its premium mobile product with which to launch Samsung Hubs – integrated mobile applications designed to fit every element of your life. With Samsung Hubs, the Samsung GALAXY S II delivers rich catalogues of books and magazines, music, advanced mobile games and control of your online social life, all from a single device.

• Social Hub Premium: The future of communication – talk to whoever you want, however you want, all from one place – your contact's list. Communication history, IM status, and updates from social networking sites are all readily available. From here, users can access all types of messages (push e-mail, text, VM and SNS) and respond directly without resorting to individual applications. It truly acts as a hub for entire social life.
• Readers Hub: Carry an enormous library of books, magazines and newspapers on-the-go. Through strategic partnerships, Samsung Readers Hub provides over 2.2 million books and novels, 2,000 global and local newspapers in 49 languages and 2,300 popular magazines in 22 languages.
• Game Hub: The easiest way to download and play best-in-class mobile games. Featuring a 3-axis gyroscopic sensor, the Samsung GALAXY S II unleashes a world of gaming possibilities. Try for free and download premium titles from partners like Gameloft, or 'enjoy Social Network Games (SNG) powered by mobage including ngmoco's We Rule and We City'.
• Music Hub: Make Samsung GALAXY S II a personal music manager and access over 12 million tracks from 7digital. Discover what's hot from top charts, search for favorite music, get recommendations on albums, enjoy previews and download them directly to Samsung GALAXY S II.

The Samsung GALAXY S II gives customers more choice in personalizing their smartphone experience. New for the Samsung GALAXY S II, Samsung has introduced Live Panel, a service that aggregates live web and application contents to a single customizable home-screen. Customers can design the lay-out of their own Live Panel, online services and mobile apps to appear on-screen. SNS feeds, information and many more applications can all be embedded and accessed instantly through the magazine-like layout.

With the enhanced voice technology on the Samsung GALAXY S II, customers will be able to do more with less. From opening the app to controlling the messaging, social media, email and calling, Samsung Voice Solution will recognizes voice and convert it to text and vice versa. Customized Voice Translation application makes the Samsung GALAXY S II the perfect travel companion, translating voice or text into - and from - a range of languages: simply speak a word or phrase into the handset and it will instantly translate it, with audio and text output.

For swift and simple device management, Samsung has introduced Kies Air. With Kies air, consumers can manage their smartphone contents from their PC, via local WiFi connections. download photos taken on the built-in camera, listen to music, check missed calls and send messages in the web browser on their PC. For added connectivity, WiFi Direct allows consumers to connect to wireless-enabled PCs and printers without the need for wireless access points. According to market requirement, the GALAXY S II is able to incorporate Near Field Communication (NFC) technology to support emerging mobile payment service and other services with mobile operators.

The GALAXY S II is exhibited at Hall #8, Mobile World Congress 2011.
For multimedia content and more detailed information, please visit www.samsungunpacked.com/press.
In this article: android, breaking news, BreakingNews, galaxy s ii, GalaxySIi, gingerbread, google, hands-on, mwc, mwc 2011, Mwc2011, samsung, touchwiz, touchwiz 4.0, Touchwiz4.0, video
All products recommended by Engadget are selected by our editorial team, independent of our parent company. Some of our stories include affiliate links. If you buy something through one of these links, we may earn an affiliate commission.
Share
Tweet
Share