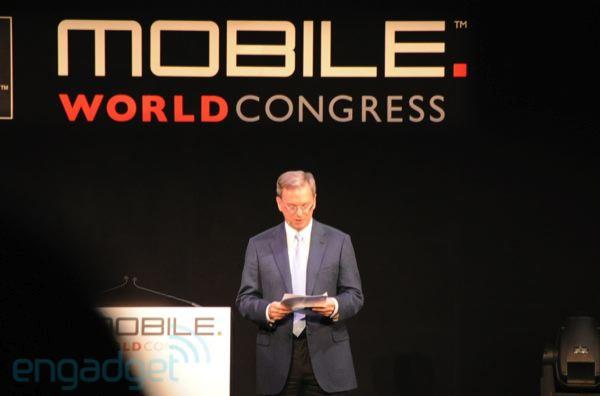 Eric Schmidt didn't give a ton of details about the future of Android during his MWC 2011 keynote, but he did drop one interesting tidbit: the next version of Android will "start with an I, be named after a dessert" and combine Gingerbread for phones and Honeycomb for tablets into a cohesive whole. We'll just go out on a limb and say that he's talking about Ice Cream, and that we'll see that Fragments UI construct used to bridge the phone / tablet display size gap. Unfortunately, Eric didn't say anything about timing -- just that updates have been happening on a "six month cycle." Considering that Honeycomb has yet to officially launch on any devices, we'd say that's not so long to wait -- but of course we're also dying to know more as soon as possible. We'll let you know if we hear anything good.
In this article: android, android update, AndroidUpdate, breaking news, BreakingNews, eric schmidt, EricSchmidt, gingerbread, honeycomb, ice cream, ice cream sandwich, IceCream, IceCreamSandwich, mwc 2011, Mwc2011, update
All products recommended by Engadget are selected by our editorial team, independent of our parent company. Some of our stories include affiliate links. If you buy something through one of these links, we may earn an affiliate commission.
Share
Tweet
Share