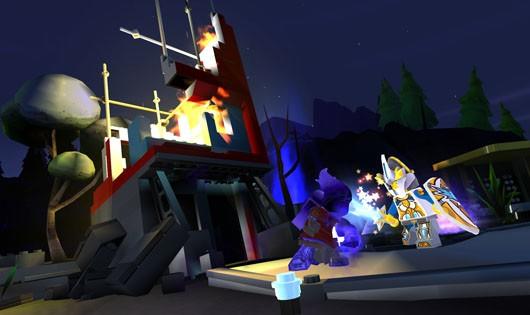 Grab three of your buddies, gear up, and get ready to travel through time to save the LEGO Universe (or at least, Nimbus Station). Starting on February 23rd, NetDevil and the LEGO Group are inviting groups of four players to journey backwards to battle the evil Maelstrom in a thrilling confrontation to decide Nimbus Station's fate.

You'll need to find Wenn Wuzzit, a Venture League time traveler who has taken up residence in the present-day Nimbus Station. His time-twister contraption serves as your personal way-back machine and as a gateway to epic battles vs. 30 waves of enemies and bosses.

In addition to the Nimbus Station shenanigans, LEGO Universe is releasing new build missions and achievements tied to players' Property Worlds. Four new dailies and 12 new achievements are on tap, with rewards that include faction tokens, Mega Brick booster packs, and new Doom Star and Behavior Model sets. Sound exciting? Check out all the details via the new trailer after the cut.

In this article: Family, Kids, Lego, Lego-group, Lego-universe, Maelstrom, Netdevil, New-achievements, New-daily-quests, Nimbus, Nimbus-station, Time-machine, Time-travel, Trailer, Video
All products recommended by Engadget are selected by our editorial team, independent of our parent company. Some of our stories include affiliate links. If you buy something through one of these links, we may earn an affiliate commission.
Share
Tweet
Share