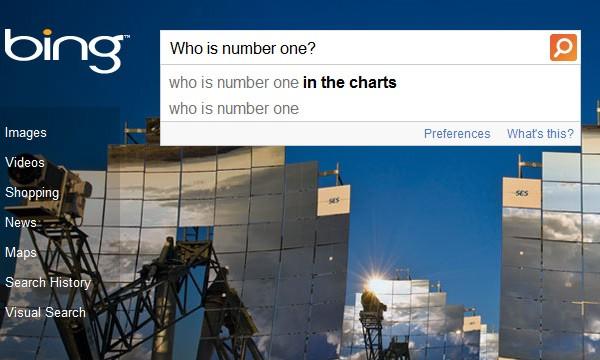 How far we've come from the heady days when Microsoft was willing to splash $44 billion to acquire Yahoo! Since then, the online portal has done whatever the opposite of going from strength to strength is, and today it's suffered the somewhat predictable ignominy of losing its second spot in search to Microsoft's upstart Bing. Statcounter places the February global share of search at 4.4 percent for Microsoft and 3.9 percent for Yahoo! (the Redmond giant can actually lay claim to a bigger slice since Bing "powers" Yahoo! search results in some countries), neither of which should give Google much reason for concern while it's sitting pretty with a share of just under 90 percent. It's the first time Google has dipped below the 90 percent mark for a long time, but Statcounter says "it shows little sign of losing its global dominance any time soon." So that settles that.

Boston, USA & Dublin, Ireland; Tuesday, 1st March, 2011: The Bing search engine overtook Yahoo! for the first time worldwide in January and increased its lead in February according to web analytics company, StatCounter. Its research arm StatCounter Global Stats finds that globally Bing reached 4.37% in February ahead of Yahoo! at 3.93%. Both trail far behind Google's 89.94% of the global search engine market.

In the United States Yahoo! at 9.74% still retains its lead over Bing at 9.03%. Google's share in the US is 79.63%. In July 2009 Microsoft announced an agreement whereby Bing would power the Yahoo! search technology. This has been implemented in the US, Canada, Australia, Brazil and Mexico.

"It is significant that Bing overtook Yahoo! globally for the first time on a monthly basis but it remains a tough battle to claw back Google's market share," commented Aodhan Cullen, CEO, StatCounter. "Although Google dipped below the 90% mark in February worldwide for the first time since August 2009 it shows little sign of losing its global dominance any time soon."

StatCounter, which specialises in website visitor analysis for organisations and bloggers, provides free lifetime stats and free detailed analysis on the latest 500 hits. Members can upgrade to access more detailed stats from $5 a month.

StatCounter Global Stats are based on aggregate data collected on a sample of over 15 billion page views per month from across the StatCounter network of more than three million websites.

In this article: bing, internet, market share, MarketShare, microsoft, search, search engine, SearchEngine, share, statcounter, web, yahoo, yahoo search, YahooSearch
All products recommended by Engadget are selected by our editorial team, independent of our parent company. Some of our stories include affiliate links. If you buy something through one of these links, we may earn an affiliate commission.
Share
Tweet
Share