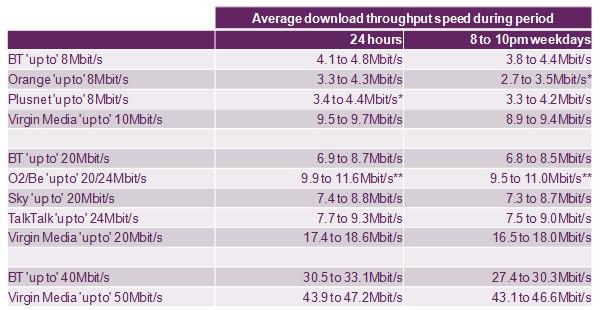 You don't have to go to the lengths of compiling a statistical project to know that advertised and actual broadband speeds are two pretty disparate entities, but it does help. Ofcom, the UK communications regulator, recently took a thorough look at 11 broadband packages, which collectively account for over 90 percent of all British broadband subscriptions, and found that actual download throughput was less than half (only 45 percent) of the advertised "up to" speed. The worst offenders were resellers of BT's ADSL lines, with Orange dipping below 3Mbit on its 8Mbit lines and TalkTalk occasionally offering only 7.5Mbit to users paying for a 24Mbit connection, while Virgin's cable connectivity won out by sticking most loyally to its listed rating. What Ofcom proposes for the future is that all these service providers start offering Typical Speed Ranges that more accurately reflect the bandwidth a potential subscriber would be buying into -- a proposal that might actually have some teeth as the British Advertising Standards Authority is currently in the midst of a review specifically concerned with broadband advertising practices. Transparency in the way we're sold broadband? That'd make a welcome change!
In this article: access, advertising, broadband, communications, connectivity, data, figures, internet, isp, numbers, ofcom, regulator, research, shocker, speed, stats, throughput, transparency, uk, united kingdom, UnitedKingdom, watchdog, web
All products recommended by Engadget are selected by our editorial team, independent of our parent company. Some of our stories include affiliate links. If you buy something through one of these links, we may earn an affiliate commission.
Share
Tweet
Share