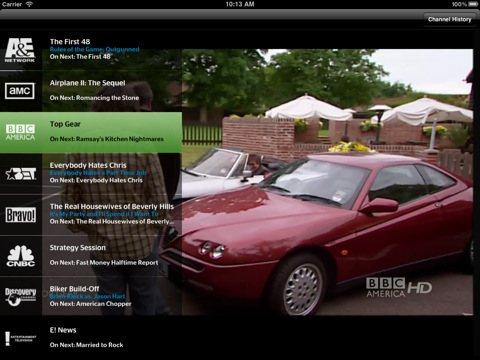 Time Warner's TWCable TV iPad app could only serve 15 of the originally announced 32 channels (which curiously did not include BBC America, despite its appearance in these screens from iTunes) due to higher than anticipated demand that crashed the servers last night (Broadcasting & Cable reports the channels have since been restored.) According to the official blog it was the most downloaded app in the iTunes store yesterday and while its engineers work on a more permanent fix, cutting the channel count was the only way to make sure people can actually open the app and log in. However, there may be more than technical difficulties that take channels offline in the future, as Adweek reports several cable networks are upset with the app, quoting one unnamed affiliate head as saying "our position is that [this sort of distribution] is not authorized by our affiliate agreements." Networks like Discovery have already made public their dissatisfaction with Dish's Sling-powered app, with everyone from Comcast to DirecTV to TiVo potentially getting in on the act we'll probably see a slew of carriage disputes and lawsuits before every channel goes the way of ESPNNetworks.
In this article: app, apple, apple ipad, AppleIpad, ipad, ipad app, IpadApp, live tv streaming, LiveTvStreaming, time warner, time warner cable, TimeWarner, TimeWarnerCable, twcable tv, twcable tv ipad app, TwcableTv, TwcableTvIpadApp
All products recommended by Engadget are selected by our editorial team, independent of our parent company. Some of our stories include affiliate links. If you buy something through one of these links, we may earn an affiliate commission.
Share
Tweet
Share