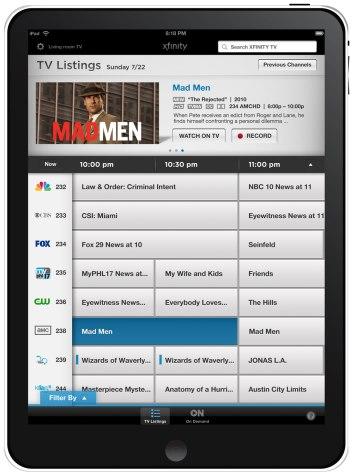 Comcast announced live streaming to its iPad and (upcoming) Android Xfinity TV apps was not far off last month, and now it's announced a new long term deal with Time Warner that brings more content to all of its TV Everywhere-related efforts. That means shows from TNT, TBS, CNN, HLN, truTV, Turner Classic Movies, Cartoon Network and Adult Swim on Xfinity TV.com, cable VOD and mobile apps and the addition of live streaming video later this year as part of a larger agreement between Time Warner and Comcast. The keen eyed will notice that window of "a few weeks" for the debut of live streaming to iPads has expanded to simply "later this year," let's hope this doesn't slip while the company focuses on other balls in the air like its purchase of NBC, a potential new set-top box interface and apps for Smart TVs.

Wide-ranging Content to Include Next Day On Demand of Top Shows and Movies From Turner Broadcasting Networks Across Multiple Platforms and Devices; Live Streaming Also Planned

"This multi-year agreement with Time Warner is a significant next step in our vision to deliver more content to our customers on any device, at anytime and anywhere"

This year, Comcast digital cable customers will have access to hundreds of hours of current and library content from signature Turner shows On Demand and online, such as "The Closer," "Men of a Certain Age," "Southland," "Conan," "Lopez Tonight," "The Venture Brothers," "Ben 10: Ultimate Alien," "Speeders," "Glory Daze," "House of Payne," "Meet The Browns," and "Piers Morgan Tonight," among many others. Comcast is also continuing to work with Turner to explore ways to unlock even more current content for its customers, including the implementation of authenticated live streaming of Turner networks through both Comcast and Turner Web sites and/or applications. The Turner content on Xfinity platforms is expected to accrue to Nielsen C3 ratings across TV and the Internet starting in mid-2011, and eventually to phone and tablet devices.

"When we first announced the TV Everywhere initiative with Comcast and Brian Roberts 18 months ago, it was an untested idea facing technical doubts and competitive pressures-but already more than 50 million consumers can experience some form of it from a wide range of content providers and distributors," said Jeffrey Bewkes, Chairman and CEO of Time Warner Inc. "This landmark agreement between Turner and Comcast, along with our separate recent deal between Comcast and HBO, really solidifies our partnership in this effort and really pushes forward the concept of giving consumers more access to quality on-demand content on any device they choose."

"This multi-year agreement with Time Warner is a significant next step in our vision to deliver more content to our customers on any device, at anytime and anywhere," said Brian L. Roberts, Chairman and CEO, Comcast Corporation. "Jeff has been a real leader in increasing the amount of content available to consumers and we are thrilled to be able to deliver hundreds of hours of Turner shows and movies to our customers across multiple devices."

Comcast has been delivering thousands of shows and movies online since 2008 and expanded its offerings with the introduction of Xfinity TV online at www.XfinityTV.com in 2010. Today, the company offers more than 150,000 online video choices and provides customers with a personalized entertainment experience. Comcast customers can also select from entertainment choices increasing to 25,000 choices On Demand, including 6,000 in high-definition. In 2010, Comcast customers viewed content On Demand approximately four billion times and there was an average of about 350 million views each month.

The agreement is a major step in the TV Everywhere strategy supported by Comcast, Time Warner and other leading content and distribution companies and is part of a broader agreement reached by Turner and Comcast.

Comcast Corporation (Nasdaq: CMCSA, CMCSK) (www.comcast.com) is one of the nation's leading providers of entertainment, information and communications products and services. Comcast is principally involved in the operation of cable systems through Comcast Cable and in the development, production and distribution of entertainment, news, sports and other content for global audiences through NBCUniversal. Comcast Cable is one of the nation's largest video, high-speed Internet and phone providers to residential and business customers. Comcast is the majority owner and manager of NBCUniversal, which owns and operates entertainment and news cable networks, the NBC and Telemundo broadcast networks, local television station groups, television production operations, a major motion picture company and theme parks.

Turner Broadcasting System, Inc., a Time Warner company, creates and programs branded news, entertainment, animation and young adult media environments on television and other platforms for consumers around the world. Turner brands and businesses include CNN/U.S., HLN, CNN International and CNN.com; TBS, TNT, Turner Classic Movies, truTV and Turner Sports; and Cartoon Network, Boomerang and Adult Swim.
In this article: android, apple, apple ipad, AppleIpad, comcast, fancast, google, ipad, live streaming, LiveStreaming, streaming, tablets, tbs, time warner, TimeWarner, tnt, turner, video on demand, VideoOnDemand, vod, xfinity, xfinity tv, XfinityTv
All products recommended by Engadget are selected by our editorial team, independent of our parent company. Some of our stories include affiliate links. If you buy something through one of these links, we may earn an affiliate commission.
Share
Tweet
Share