D. Murph
March 28th, 2011
In this article: audio, audiophile, canalphones, earbud, earbuds, earphone, Earphones, headphone, headphones, review, reviewed, w4, westone, westone 4, Westone Laboratories, Westone4, WestoneLaboratories
Westone isn't exactly a household name, even in the earphone universe. But what the company lacks in recognition, it more than makes up for in quality. If you'll recall, we had a listen to its ES5 custom in-ear monitors earlier in the year, and while they cost a staggering $950, they also managed to melt our brain and thoroughly spoil us in the process. Thankfully, there's a budget alternative: the Westone 4. Granted, even 50 percent off still lands you right around $449, but many audiophiles would argue that said price is a small one to pay when looking at a quad-driver setup, a three-way crossover network and an insanely robust set of earbud tips. There's no question that these guys are aimed at the professionals in the crowd, and if you're interested in seriously stepping up your mobile listening game, you owe it to yourself to peek our full review. It's after the break, per usual.
%Gallery-119832%
Westone
0
SCORE
Engadget
N/A
Critics
4 reviews
90
Users - Not yet scored
N/A 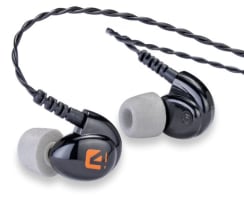 There's actually quite a bit of competition at this level in the earbud / in-ear monitor world, but Westone has managed to carve our somewhat of a niche; the 4s offer four balanced armature drivers and a custom set of earbud tips that do a better job of canceling noise than some of the active models we've listened to. Upon cracking open the box, we immediately noticed just how light these guys are. There's a conventional braided cable (which does a better-than-decent job at avoiding tangles) and larger-than-average driver modules. 'Course, Westone anticipates that you'll be wearing these a lot like an in-ear monitor, so the bulk of it the size curls up within your ear. Yeah, it requires a bit of precision when inserting them, but as you'll read below, it's well worth doing right. The company also includes a zippered hardshell case with an in-line volume control and a bag full of varied ear tips (not to mention a tip cleaner).

Outside of that, you won't find any significant bells and / or whistles. No in-line iPod remote, no microphone, and no extension cord. It's pretty clear that the outfit focused its energy on the audio portion, and you'll understand immediately after trying 'em out. The left / right cable split happens around 11 inches from the earbud tips, which is just enough room to wrap each one around the top of your ear and insert the earbud. Would we have preferred a bit more leniency here? Sure, but it's not like wearing the 'buds in this manner is uncomfortable in the least.

We should point out that these ship with a small set of grey foam tips, which fit best after they're smashed a bit before insertion -- think ear plugs, and you'll grok the concept. Also like ear plugs, it takes about 30 seconds for the foam to re-expand once in your ear and create a snug seal, but once that seal is formed, you're in for a treat. We honestly had a very difficult time hearing any outside noise whatsoever once these filled up within our ear, and if you've been shopping for an ideal set of earbuds for your jetsetter lifestyle, we'd estimate that these would be perfect on the airplane.

The real question, however, is this: how does a $449 pair of 'buds handle music? In a word: magically. In a trifecta of them: insanely, incredibly well. There's really just no reason to get complicated here -- regardless of the genre, the Westone 4s managed to perform with precision, and they have instantly become our favorite earbuds in the sub-$500 realm. We tried out seven other eartips that the company included, and none fit our canals as well as the stock foam tips. Granted, those with larger / smaller ears will appreciate the varied sizes and shapes (including a triple-flanged rubber tip), but the seal and sound came from the foamies.

If pressed to describe the sound, we'd compare it to Klipsch's $350 X10i in a lot of ways, but without the iconic Klipsch bump in the mid / high range. Truth be told, we were downright floored by just how level these felt. We didn't sense one iota of distortion, nor did we get the feeling that these had been EQ'd at the factory to bring out one particular frequency range. The music sounds exactly like the producer intended, and we were able to hear layers in jams from The Limousines to Lupe Fiasco to Mumford & Sons that we missed using our lower-end assortment. In general, we tend to feel that perfectly flat headphones end up lacking a bit in the low-end department, but we're absolutely elated to report that it's simply different with the 4s. Mids, highs and lows were all powerful, clear as crystal and easy to discern. If you were doubting the noticeability of those four drivers, don't.

We also pushed the volume to near-uncomfortable levels, and never heard a peek of distortion. Of course, with such an insane seal, you can actually keep the volume at reasonable levels, but those who enjoy destroying one of their most vital senses will definitely enjoy the ride. We also found these guys to be remarkably comfortable even in long-term sessions -- three straight hours of listening left our ears no worse off than they were before.

Frankly, it's tough to justify $449 for a set of earbuds, particularly a set that doesn't double as a smartphone microphone and isn't exactly tailored for gym rats (though they'll definitely remain planted should you choose to sweat on 'em). But if you place an absurdly high value on precision and comfort, and would rather hear your music than the gentle roar of airline engines when flying, we can't help but wholeheartedly recommend the Westone 4s. Are they $100 better than the heralded X10i from Klipsch? Probably not, but if you're dead-set on getting a pair with an in-ear monitor type of fit, your search ends here. Sadly, these guys still aren't shipping, but so long as that "Q1 2011" estimate remains legitimate, it shouldn't be too long now.

Update: Looks like they're shipping out now.
All products recommended by Engadget are selected by our editorial team, independent of our parent company. Some of our stories include affiliate links. If you buy something through one of these links, we may earn an affiliate commission.