D. Murph
February 1st, 2010
In this article: audio, earbud, earbuds, feature, featured, features, headphone, headphones, Image X10i, ImageX10i, impressions, iphone, iphone accessory, IphoneAccessory, klipsch, klipsch X10i, KlipschX10i, music, preview, sound, X10i
We let you in on one of Klipsch's little secrets when we revealed the Image X10i to the world back in December, and now that the company's highest-end iPhone-friendly earbuds will be shipping en masse within a month, we figured we'd grab a set and let you know if they were indeed worth their weight in gold (or just $349.99, really). The X10 has sat atop the company's most recent lineup of earbuds for awhile now, and with the raging success of the S4i came a stellar idea: add the same iPod / iPhone remote to the flagship set of 'buds. The X10i is just that -- a set of X10 earbuds with the iPhone remote that we highlighted in our S4i review. Needless to say, the X10i isn't aimed at the budget-minded listener, but we were most curious to see if these really were worth the $250 leap from the aforementioned S4i. Read on to peek our conclusion.
%Gallery-84384%
Klipsch 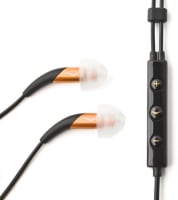 If you've ever had the pleasure of listening to the X10 earbuds, then you'll know exactly what kind of sonic signature is presented here. The only new part will be the in-line iPhone remote, which functions exactly as the one on the S4i. That's to say that the volume up / down buttons will only function on the iPhone 3GS (sorry, iPhone 3G owners), but the play / pause / track skip center button works perfectly well on both handsets. In order to match the motif, Klipsch has added golden colored labels to the remote buttons -- a cute touch, for sure. The same tangle-resistant cabling is here, and the company tossed in a clothing clip that helps keep the remote (and in turn, the microphone that's positioned on the back side of it) exactly where you want it.

We tested out the headset on a few calls, and while we did have one person inform us that we sounded a bit quiet before we adjusted the mic a touch closer to our mouth (and stopped talking in our after-hours voice), we found someone else that had absolutely no issues hearing us. All told, this is definitely one of the nicer in-line microphones out there, and if you're looking to either avoid wearing a Bluetooth headset or simply find a decent mic within a more-than-decent set of 'buds, you'll probably have a tough time complaining with the package here. Is the X10i worth an upgrade if you already own the X10? Not in our estimation. Of course, if you can find someone who will pick your X10 up for a pretty penny, we'd definitely say that pulling the trigger on the X10i would make a lot more sense.

Now, for the newcomers. $349.99 buys you a well-designed box, a sleek hardshell carry case, an airplane socket adapter, a 3.5mm-to-1/4" adapter, the X10i, a clothing clip and a variety of single and dual-flanged ear tips. We ran through the full gamut of tips before decided that the medium dual-flanged tips suited us best, and after we were situated, we kicked back and enjoyed the dynamics. And trust us, there's plenty to enjoy. We did A-B comparisons with the $100 S4i in order to more accurately judge the differences between the two, and while the X10i wasn't tremendously better than the S4i overall, it's the subtle differences that'll win you over. Put simply, the untrained listener will probably not enjoy the improvements in the X10i, at least not to the point where they'd pay an extra $250 over the (admittedly stellar) S4i. The self-proclaimed audiophile, however, could very well find the X10i to be a far more delightful experience. The differences are most noticeable at the high end; on the X10i, cymbal crashes and wailing lead lines were handled with an impeccable amount of accuracy not found on the S4i. On the low end, we also found the bass to be a touch more punchy (and less boomy), but it's the clarity in the vocals and upper frequencies that floored us.

All things considered, it's impossible to recommend the X10i to anyone other than the most affluent among us. Like it or not, the S4i (if you're looking to stick with Klipsch, which ain't a bad choice in our own humble opinion) offers sound quality that'll be more than sufficient for the vast, vast majority of PMP owners. The extra $250 required to step up to the X10i can only be justified if a) money ain't a thang and / or b) you're one that genuinely appreciates hearing an absurd amount of detail in your music -- we're talking about stuff that you have to actively listen for in order to notice. If that's you, we're pretty darn confident that you won't be let down by the X10i, and hey, at least you've got a month to pinch those pennies before these float out the masses.