D. Murph
March 29th, 2011
In this article: amoled, android, android 2.1, Android2.1, cowon, cowon d3, CowonD3, d3, d3 plenue, D3Plenue, pmp, portable media player, PortableMediaPlayer, review, video
One thing's for sure: Cowon's D3 Plenue is vastly different (and superior) to the firm's AMOLED-equipped S9 from 2008, and it's also catering to a vastly different sect of consumers compared to its ultra-capacious X7. This beaut is one of the few pocketable Android-based PMPs available today, offering up a gorgeous 3.7-inch AMOLED capacitive touchpanel (800 x 480), dedicated media controls along the edges, Android 2.1, WiFi, 1080p video output, a built-in microphone and a battery good for up to 21 hours of use. As with every other Cowon player, this one also supports every file format ever conceived, including FLAC, APE and OGG -- three that the audiophiles in attendance will definitely recognize. The real question here is simple: does having Android on a non-connected (cellular, anyway) device really do you much good, and moreover, is it really worth the $357.99 asking price? We'll discuss these points and more in our full review just after the break. Join us, won't you?
%Gallery-119869%
Cowon
0
SCORE
Engadget
N/A
Critics
4 reviews
68
Users - Not yet scored
N/A 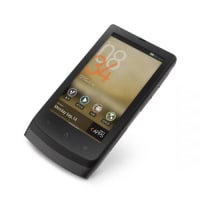 
Per usual, Cowon has really nailed the design here. We've always been fans of the company's aesthetics, and the trend continues here. The unboxing experience is one of the best around, and the D3 itself is just lovely to hold. It's light, slim and pocketable, yet intensely rigid and solid. There's nary a hint of low-quality here; everything from the tough-as-nails capacitive touchscreen to the stiff, soft-touch back is just marvelous to hold and admire. We also can't help but applaud the company for tossing in a few extra physical buttons along the right edge. Aside from the conventional volume rocker, you'll also get a track forward, track backward and a play / pause button, all of which can be toggled from your pocket without having to activate the display. Super handy, for obvious reasons.

We should also point out that the 3.5mm headphone jack resides on the bottom, right alongside the proprietary USB connector and DC input. As with the iPod touch, some folks will loathe it, while others love it -- we're a bit indifferent on the topic, but it obviously works best with right-angle plugs. Cowon also double-dipped on the storage front; while there's 32GB of internal storage from the get-go, there's also a side-accessible microSD card slot if you'd rather push things to 64GB. We definitely appreciate not having to remove a rear cover in order to access this here slot, but on the other hand, this design decision also ensures that the battery is tightly encased and impossible to access. Not a huge deal, but there it is.


In the past, we've lamented the fact that Cowon's homegrown software builds weren't exactly ideal, and there's no question that our interest was piqued when we heard that the company would be relying on Android for the D3. That said, Android 2.1 is already a bit dated, and while the core is certainly here, it's heavily disguised. Cowon has definitely reworked the OS for its own purposes, and in doing so, we're left with a music app that's actually less intuitive than Google's own, an email app that's laughable compared to Gmail, and no access whatsoever to the Android Market. If it sounds like a train wreck, that's because it is. We can't deny that things are fairly pleasing to the eye at a glance, but the eye candy matters less and less as you actually try to use the device.

The preloaded applications are all so-so, and the inability to easily find and download new ones is a real deal-killer. As it stands, you'll have to scour the murky APK download market online, and then drag / drop those files into a pre-established APK folder within the file system. We should probably take this opportunity to point out that the D3 isn't as Mac-friendly as the company's prior offerings; we were never able to drop anything (music, apps, etc.) onto the device from a Mac, but things went smoothly when shifting over to Windows 7 Professional. It's theoretically possible to get Skype on here, and we actually managed to complete a Skype call over WiFi, but the app takes ages to load, and due to the lackluster microphone quality, folks on the other end couldn't wait to rid themselves of our intrusion. Being the argonauts that we are, we also tossed Google Maps on here for kicks; sadly, there's no GPS or A-GPS, so even with a live WiFi connection, the app refuses to pinpoint your location.

After using it for a week, we found ourselves a lot less impressed with Android on a PMP. In fact, we felt it unnecessary, at least when bona fide Android Market access is forbidden. You might say that you'd rather have the ability to sideload Angry Birds than to have no options at all for installing it, and we'd have a tough time arguing that; however, there's essentially no hope that this device will ever see Froyo, let alone Gingerbread, and the hardware just isn't powerful enough to run Google's mobile OS in a satisfactory manner.


Speaking of which, it's about time we touch on just how sluggish the D3 is. We can't put a finger on what sort of processor is tucked inside (update: looks like a 720MHz chip), but judging by the above-average battery life (21 hours for audio; 10 for video) and below-average performance, we're guessing it's of the "slow" variety. More often than not, we'd have to swipe two or three times before the device would recognize our touch, and while pinch-to-zoom is supported, you won't be making much use of it if the device requires two to three seconds to understand what you're trying to do. Even changing orientation from vertical to horizontal takes three to five seconds, and while one or two of these would be forgivable, the entire experience becomes bogged down in no time flat. Have a look at what we mean in the video below:


Even loading up the Music app, which should be the point where this device thrives, is a painful experience, and sifting through your artists / albums / playlists takes a shocking amount of finagling. The web browser manages to perform decently, and Bluetooth support seemed fine. Both BT-compatible sources as well as headphones paired up nicely, but don't dare try to multitask if you're blasting music out over the short-range airwaves. Sadly, the battery here actually falls short compared to prior Cowon devices; the 32GB iPod touch can last well over 30 hours on a single charge when playing back audio, while Cowon's D3 isn't even rated to last longer than 21 hours.


It wouldn't be a proper Cowon review without a section dedicated to audio quality, as -- quite frankly -- that's the one place where you can count on the company's players to be superior to the competition. Thankfully, nothing has changed in this regard. When A-B'ing the D3 to a Nexus One and an iPod touch, we consistently felt that the audio quality from the D3 was superior. Music just felt fuller and less hazy, and if there's one saving grace on this entire thing, it's the world-class sound quality. We'd also like to throw a round of golf claps in Cowon's direction for the thorough amount of included EQ options; we usually aren't ones to screw with a producer's mix, but the equalization options included here are most certainly worth a listen. Dollars to donuts you'll find one that you enjoy even better than the stock mix, and we're guessing you'll also be shocked at how well it enhances things without comically distorting a particular frequency range.


Cowon's D3 Plenue is awfully close to being a stellar PMP. The sound quality is truly unmatched, the build quality is worth writing home about, and the 3.7-inch AMOLED display is lovely to gaze at. Unfortunately, those pros are overshadowed by a laundry list of gripes, including a disturbingly sluggish overall experience, no access to the Android Market, the omission of an A-GPS / GPS chip, a terrible Music application, the inexplicable use of a proprietary USB connector and the inclusion of a second-rate email application. It's also $357.99, which is nearly $60 more than a 32GB iPod touch and just $30 shy of matching the 64GB iPod touch. We hate to make the obvious comparison, but there's no honest-to-goodness reason for choosing this over Apple's darling. Heck, at least that one ships with a camera for video calling and includes a processor that doesn't make you wait between each panel change.

We'd love to love the D3, and we've no doubt fallen for its superior aural qualities, but there's just too many pitfalls here (and too lofty a price point) to recommend for the masses. As for the audiophiles would could care less about anything else other than auditory bliss? Go right ahead, but be sure to let us know how you're planning to deal with your heightened blood pressure -- that painfully slow Music app is bound to have some negative side effects.