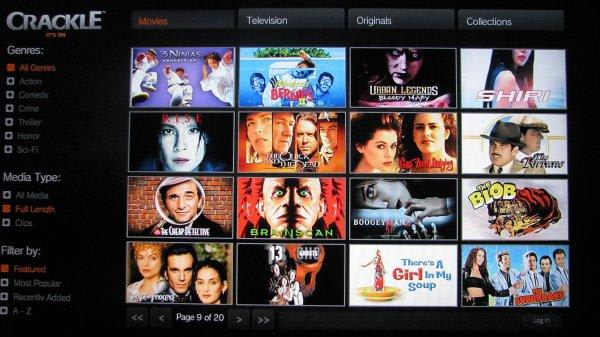 Sony's Crackle has had a more successful life so far than its previous iteration as Grouper, streaming movies, TV shows and shorts to various devices since launching back in '07 and announced today its full library will be streaming to the PS3, Roku boxes, Sony Blu-ray players and Bravia TVs. Expanding full access from just the Google TV (there's also an Android app that currently streams some of the items) it's taking credit as the only provider offering free full length flicks including Ghostbusters, Bad Boys, A Few Good Men and more for free on these platforms. The drawbacks are video that tops out at 480p standard definition and Hulu-style commercial interruptions but if you absolutely must watch Weekend at Bernies II without spending any money it is an option -- at least, as long as the PS3 browser doesn't crash with an out of memory error like it did for us. It did work better on more capable platforms, so check out the full details in the press release after the break.

Crackle's ad-supported service provides consumers with a uniquely curated experience that includes hundreds of Hollywood movies in genres including action, comedy, crime, horror, thriller and sci-fi, plus thousands of TV episodes and award-winning Crackle original programming - all of which can be accessed online, via mobile, and now, on a broad selection of connected devices.

"Crackle is the best single source of ad-supported Hollywood films and television series on the internet," said Berger. "By making our extensive collection of content available on these platforms, we're bringing an unparalleled viewing experience directly to consumers through their internet-enabled devices."

On average viewers spend 50 minutes per visit to Crackle on connected TVs. Crackle can be found in the Channel Store on Roku, on the PlayStation 3 Internet Browser home screen and on all BRAVIA Internet Video devices including Sony Blu-ray players and BRAVIA televisions. Additionally, Crackle was a launch partner with Google TV and can be accessed via the Spotlight section.

A sampling of Crackle's current and upcoming movies includes:


Titles are refreshed frequently featuring approximately 20 new titles per month from Columbia Pictures, TriStar Pictures, Screen Gems and Sony Pictures Classics. Crackle on PlayStation 3 and Google TV is available to audiences in the U.S. and Canada. Crackle on Roku, Sony's BRAVIA, Streaming Player and Blu-ray devices is available in the U.S. only.

Crackle, Inc., a Sony Pictures Entertainment Company, is a multi-platform next-generation video entertainment network that distributes digital content including original short form series and full-length traditional television programming and feature films from Columbia Pictures, TriStar Pictures, Screen Gems and others. Crackle is one of the fastest growing entertainment destinations on the Internet today, offering audiences quality programming in a variety of genres, including comedy, action, sci-fi, horror, music and reality. Crackle reaches an impressive audience through its diverse online and mobile distribution network. Visit Crackle at www.crackle.com
In this article: ad supported, AdSupported, blu-ray player, Blu-rayPlayer, bravia, bravia tv, BraviaTv, crackle, free movies, FreeMovies, google tv, GoogleTv, movie streaming, MovieStreaming, playstation 3, Playstation3, ps3, roku, sony, sony playstation 3, SonyPlaystation3
All products recommended by Engadget are selected by our editorial team, independent of our parent company. Some of our stories include affiliate links. If you buy something through one of these links, we may earn an affiliate commission.
Share
Tweet
Share