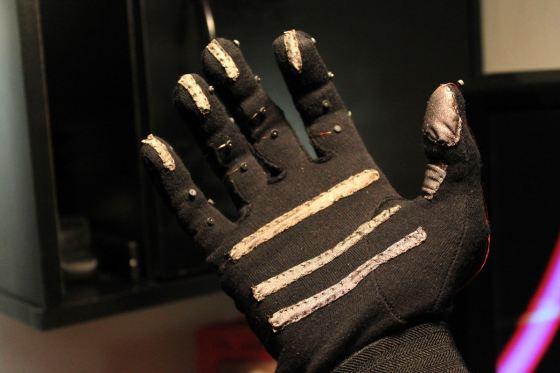 We've seen some pretty ambitious hand warmers in our day, but this one takes the cake. Keyglove is an Open Source Hardware (OSHW) project that's intended to eliminate those clunky keyboards and unmanageable mice from the computing process altogether, instead engaging a series of conductive sensors that, when touched together, mimic a keystroke. The mitt's creator says the traditional mobile keyboard is "either too big to be portable, or too small to be easy to use," adding that his solution would eventually become second nature just like touch typing. Keyglove is an Arduino and AVR-powered device that also incorporates an accelerometer to control mouse movements. It's apparently fully customizable and allows for a total of 60 unique touch combinations -- impressive, sure, but it took us long enough to figure out the home keys on the real thing. If you dream of a world full of one-handed typists, check out the video after the break, or follow the source link to find out how you can donate to the project.

In this article: accelerometer, Arduino, AVR, concept, control, controller, glove, gloves, key, keyboard, Keyglove, mitt, mouse, one-handed, open source, Open Source Hardware, OpenSource, OpenSourceHardware, OSHW, QWERTY, touch control, TouchControl, type, typing, video
All products recommended by Engadget are selected by our editorial team, independent of our parent company. Some of our stories include affiliate links. If you buy something through one of these links, we may earn an affiliate commission.
Share
Tweet
Share