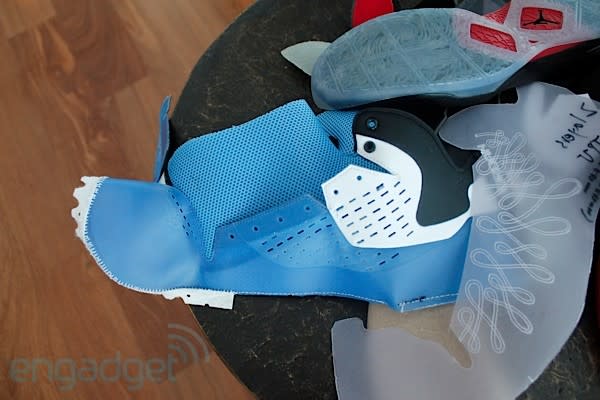 It's not all that difficult to peer at some gadgets without fully understanding the wizardry and magic that assists in driving them from concept to reality. Did shoes ever cross your noggin as being technologically eye-opening? Sure, a few pairs of kicks have caught our attention over the years, but could a pair of sneakers be more than just that? To answer that question, we sat down with NBA star Dwyane Wade and Jordan Brand designer Mark smith to figure out what goes in to a modern pair of kicks. Read on to introduce your brain to the latest in shoe technology.


As some of you may have guessed, shoes don't create themselves, and the technological aspects of the process of building them is lengthy and somewhat complicated. The inspiration for the design of the Fly Wade comes from the Air Jordan 2010, a shoe that Jordan Brand decided to remodel and brand as Dwyane's signature sneaker. In total, each AJ 2010 weighs 15.5 ounces and the company set itself a goal to build a stronger and better version while decreasing weight. The goal was a 10 percent drop, and each Fly Wade weighs 13 ounces -- that's lighter than a Galaxy Tab.

Design begins with analog sketches, along with using Adobe 3D and Shoemaker (a program created specially for Jordan Brand) to build 3D models of the shoe. The designs (which include cross section visuals, schematics, etc.) are then shipped off to Taiwanese factories where a very early prototype gets built according to Jordan Brand's specs. Afterward, this prototype is sent to Chinese factories where they'll produce a slew of sneakers for testing.

The shoe-testing process takes place at the Nike Sports Research Lab in Oregon, where a team of collegiate level basketball players and semiprofessionals play in the shoes for two hours, twice a week. Cushioning, traction, overall fit, breathability, underfoot comfort and heal slippage are factors that are judged and will be altered according the testers' feedback. Aside from the college ballers, a group of five athletes make their way to the lab's half-court facility for more rigorous tests. The floor is packed with sensors, providing precise and accurate feedback, and the athletes are filmed performing drills and playing scrimmages at 4,000 frames / second. These five players' sneakers have a built-in 99-point sensor grid that's linked up with a pressure map and will be viewed in conjunction with the high-speed footage.

And as for DWade himself? Because the shoe undergoes three or four major redesigns, he'll only see a new version of the sneaker every three months or so. Wade will play in the kicks during practice, giving the designers feedback and mention any needed adjustments. The entire process took some 13 months, and, in the end, Jordan Brand had its 13 ounce dream shoe. The shoes will be released in two color variants on May 5th and the remaining two will debut in June, though Wade will be rocking them in the playoffs later this month. For an interview with the man himself (as well as a glimpse into his mobile preferences), feast your eyes on the video below.

In this article: aj 2011, Aj2011, dwyane, dwyane wade, DwyaneWade, fly, fly wade, FlyWade, interview, jordan, jordan brand, JordanBrand, lightweight, mark, mark smith, MarkSmith, nike, shoe, smith, sneaker, technology, the flash, TheFlash, video, wade, wearables
All products recommended by Engadget are selected by our editorial team, independent of our parent company. Some of our stories include affiliate links. If you buy something through one of these links, we may earn an affiliate commission.
Share
Tweet
Share