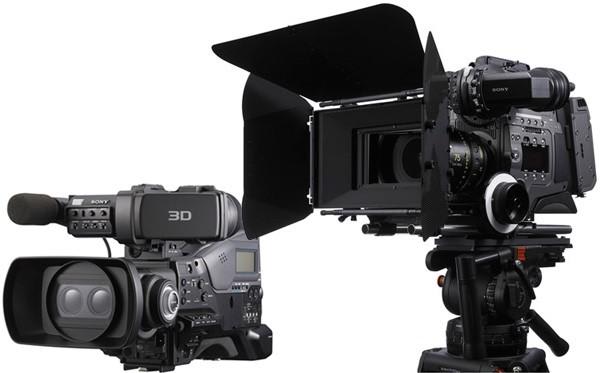 The current trend in the world of home theater may seem like 3D cinematography is all the hype these days, but Sony's latest imager in its CineAlta family begs to differ. Unveiled at the 2011 NAB Show, this F65 mammoth camera (pictured right) packs one beastly 20.4 megapixel, Super 35mm CMOS sensor -- a huge leap from the F35's 12.4 megapixel 1080p CCD. Aside from the obvious quantitative difference, what's special about this new chip is that unlike the Bayer BG-GR subpixel matrix on conventional 4K sensors, here we have green pixels forming the 4K grid while an RB-BR matrix fills in the space, thus doubling the number of horizontal pixels to 8K for a finer 4K picture (see illustration after the break), as well as allowing better visual effects editing using the extra data. What's more, this sensor is fast -- not only can it capture up to 72fps on 4K, but it can also crank up to a smooth 120fps on 2K. As for those seeking to squeeze out every bit of detail from their clips, don't worry: the F65's got you covered with a 16-bit RAW output (19Gbps) at 4K resolution, or it can be compressed to 5Gbps for the convenience of recording onto the new SR-R4 portable 4K recorder. Looks like Sony's finally found a candidate that'll put a lid on film stock, but then again, at the end of the day it'll depend on the price tag when it comes out in Q3 this year.

Of course, Sony isn't going to just ignore the 3D scene here. Also announced at NAB is the PMW-TD300, which will be the first professional 3D camcorder sporting a shoulder mount. Featuring a pair of Exmor 3CMOS sensors, hardcore cameramen will finally be able to go mobile with this new toy while filming 3D in 1080p. Not sure how the videos will turn out, though -- we're not keen on the idea of watching shaky and potentially nauseating 3D captured by someone running along the sideline. Anyhow, this camera will be up for grabs in Autumn this year.

Sony is revolutionising digital cinematography with the official unveiling of its much-anticipated next-generation CineAlta camera. The F65 raises the bar in the quest for the 'look' of 65mm film, and delivers on its promise to derive true 4K resolution and beyond – at the point of image capture.

At the heart of the F65 camera is Sony's newly developed 8K sensor, which will deliver pristine HD, 2K, and true 4K resolution today - and will go far beyond 4K in the future, as the industry needs to evolve. The Sony imager is also the first to provide a dedicated green photosite for each pixel in the 4K output image. This is twice the amount of green resolution compared with traditional 4K Bayer pattern sensors, providing a significant improvement in image resolution that is ideal for VFX processing.

"Sony already has a successful track record in developing 4K technology, with our 4K digital cinema projection system literally re-defining the movie-going experience," said Olivier Bovis, Head of AV Media Business, Sony Professional, Sony Europe. "However, Sony is committed to driving every aspect of a 4K workflow – starting with acquisition. This camera is the pinnacle of 30-plus years of research, experience and engineering breakthroughs and is the latest example of Sony's ongoing pursuit of the highest quality content creation and production."

The 8K CMOS sensor can run up to maximum 120Fps. This sensor performance combined with 16 bit RAW output makes the F65 the first image capture system designed from the ground up to support the Academy IIF-ACES, Image Interchange Framework, Academy Colour Encoding Specification.

The F65 has also been designed for multiple production applications, including 3D rigs and Steadicam, and will offer a compact and lightweight detachable camera T-head for these configurations. In addition, an optional mechanical rotary shutter will be available for completely eliminating motion artefacts that are inherent with other CMOS sensor technology.

A dockable SR memory recorder – model SR-R4 – attaches to the camera to record directly onto an SR memory card of 256 GB, 512 GB or 1TB capacity with data security and sustained throughput of 5 Gbps. The recorder will enable ultra high speed recording of 16-bit RAW data.

Sony is adding new dimensions to its 3D offering with the introduction of two single-body 3D camcorders for professional applications: the HXR-NX3D1E and the PMW-TD300.

The shoulder-mount design of the PMW-TD300 promises to bring greater flexibility to live shoots, freeing the operator to focus on image capture.

"This new camera will address many of the needs in live 3D production, working in the field as a perfect complement to the HD cameras currently used in 3D rigs by leading production companies and giving creative professionals a more flexible and mobile option for getting the right 3D shot," said Olivier Bovis, Head of AV Media, Sony Professional, Sony Europe.

The PMW-TD300 features a dual 1/2-inch Exmor 3CMOS sensor design with full HD 1920x1080 pixel resolution. The camcorder is based on the XDCAM EX recording platform, allowing users to take advantage of a proven solid-state workflow for maximum flexibility.

When recording in 3D, left and right eye signals are simultaneously recorded onto separate SxS cards (four SxS card slots in total, two slots for each view). Its shoulder-mount design brings stability in 'run and gun' shooting environments, allowing professionals to worry less about ergonomics and concentrate more on getting the right shot.

The camera is switchable between 2D and 3D modes. The 2D view is recorded onto a single card, with 2D redundancy achieved through parallel recording onto L/R cards. (Images recorded on the left and right cards are slightly different, because different lenses are used.)