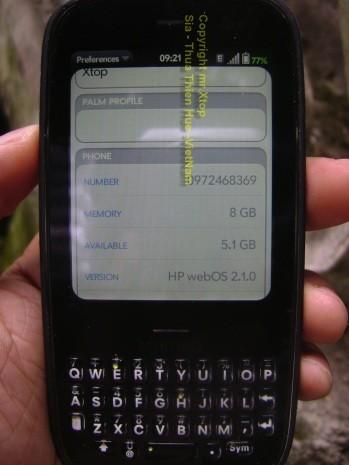 Engadget readers are invited to use their judgment on this one, because frankly, we're not sure what to make of this pre-production Pixi running WebOS 2.1. A Vietnamese member of the Pre Central forums known as "mr.xtop" recently posted snapshots of his recent purchase, and as the story goes, he noted something was amiss upon witnessing an OS that certainly didn't belong. We can definitively say the phone is pre-release, noting the tell-tale green dots on the keyboard, but whether this is a forthcoming device or shoehorn hack is currently unknown (though common sense tells us it's the latter, given the recent luck of Pre Plus owners). That said, we're pleasantly surprised by the responsive interface, considering HP's insistence that this diminutive smartphone is incapable of handling the new WebOS. Again, we were pretty skeptical until seeing the software in action, so be sure to check the video after the break -- mr.xtop is going to make a believer out of you.
In this article: hack, hp, HpPalm, mobile, mod, mr.xtop, palm, palm pixi, PalmPixi, pixi, pixi plus, PixiPlus, webos, webos 2.0, webos 2.1, Webos2.0, Webos2.1
All products recommended by Engadget are selected by our editorial team, independent of our parent company. Some of our stories include affiliate links. If you buy something through one of these links, we may earn an affiliate commission.
Share
Tweet
Share