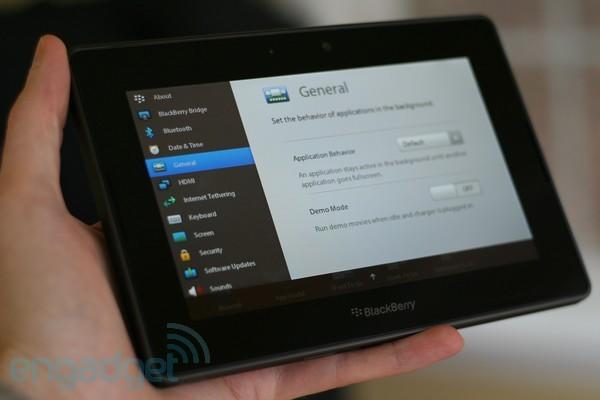 Lately, anything goes when a RIM CEO gets in front of the media. Fortunately, it was the other CEO, Jim Balsillie, talking to Bloomberg this time delivering a calm, cool rebuttal to all the lukewarm PlayBook reviews. His consumer defense is largely based upon the PlayBook's ability to receive software updates (we received three in the brief time we had our review unit) throughout its lifetime. Jim, as you can imagine, preferred keeping the conversation focused on how the PlayBook is fully functional today when used in combination with a BlackBerry handset in business environments. Balsillie did seem to hint that the consumer experience could improve relatively quickly, saying, "We'll have an over the air email client to announce very very soon. We have BlackBerry World -- our user conference -- in a couple weeks. Stay tuned for all capabilities we have coming out on this stuff." See the man dance on the hotseat right after the break.

Update: In a second interview, this time with the Wall Street Journal, Balsillie says that the standalone email client is scheduled for an OTA release within the next 60 days.

In this article: 3g, 3g playbook, 3gPlaybook, blackberry, blackberry playbook, BlackBerry World, BlackberryPlaybook, BlackberryWorld, email, Jim Balsillie, JimBalsillie, ota, playbook, qnx, rim, software update, SoftwareUpdate, video
All products recommended by Engadget are selected by our editorial team, independent of our parent company. Some of our stories include affiliate links. If you buy something through one of these links, we may earn an affiliate commission.
Share
Tweet
Share