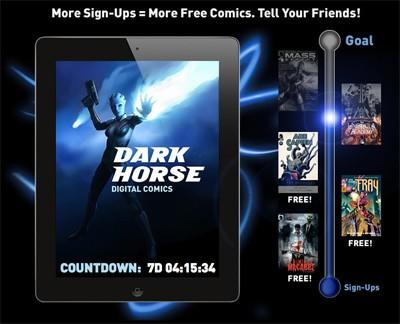 The wait is finally almost over, Dark Horse Digital will be releasing their iOS app on April 27! I love reading comics on the iPad, the form-factor and experience is perfect. In fact, I prefer it to paper comics. However, while Marvel, DC Comics and some other publishers have been adding more and more issues from their libraries to a number of applications, such as Comixology, Dark Horse has been notably absent.

The Dark Horse app is something I've been following pretty closely for a while now. Originally, it was slated to be released in January, but they weren't finished, so they postponed the launch and promised to make it up to excited fans. That's a promise they're making good on by including the first issue of Hellboy: Seed of Destruction bundled with the app, and they'll be giving away a few other titles if they can get enough people to subscribe to the newsletter before it launches.

Right now, they've gathered enough subscribers to unlock the first issues of Criminal Macabre, Abe Sapien: The Drowning and Joss Whedon's Fray. There are two more comics still to unlock if they reach their goal; the first appears to be Mass Effect Volume 1: Redemption and the second looks like Umbrella Academy.

You can read the entire list of launch comics on their announcement post, and you are going to sign up for the newsletter, right? Let us know what comic you're going to buy first and any you hope they'll add quickly.

In this article: App, comic, Comics, Dark Horse, Dark Horse Comics, DarkHorse, DarkHorseComics
All products recommended by Engadget are selected by our editorial team, independent of our parent company. Some of our stories include affiliate links. If you buy something through one of these links, we may earn an affiliate commission.
Share
Tweet
Share