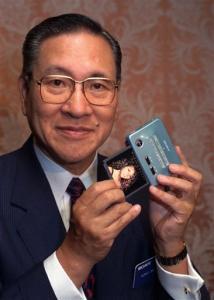 There's more sad news out of Japan this morning, we're afraid -- Sony is reporting that former chairman Norio Ohga passed away in Tokyo yesterday from multiple organ failure. He was 81. You may not personally remember a Sony under his reign -- Ohga directly helmed the company from 1982 to 1995 after decades of service in product planning -- but Norio Ohga was arguably the man responsible for turning Sony from a high-profile analog electronics manufacturer into a digital multimedia conglomerate. He helmed the deals that formed Sony Music, paved the way for Sony Pictures and established the very same Sony Computer Entertainment that would birth the PlayStation, and it was he who pushed the optical compact disc standard that all but replaced the magnetic cassettes and diskettes that held portable media. Without him, DVDs and Blu-rays might have fallen by the wayside, and that's another thought that brings tears to our eyes. You'll find Ohga's official obituary after the break.

Tokyo, Japan -- It is with great sadness that Sony Corporation today announced the loss of Norio Ohga, Senior Advisor and former President and Chairman, Sony Corporation. Mr. Ohga passed away at 9:14 AM on April 23, 2011 in Tokyo. The cause of death was multiple organ failure. He was 81 years old. A private wake will be held among family and close relatives, and a company service will take place at a later date.

Commenting on today's loss, Sir Howard Stringer, Chairman, CEO and President, Sony Corporation said, "When I first joined Sony in 1997, Ohga-san was serving on the frontlines of Sony management as Chairman and CEO. His numerous and successful endeavors were well-known both inside and outside of Sony. Witnessing Ohga-san's leadership firsthand was truly an honor, and one I continued to enjoy and benefit from in countless ways in the years that followed.

By redefining Sony as a company encompassing both hardware and software, Ohga-san succeeded where other Japanese companies failed. It is no exaggeration to attribute Sony's evolution beyond audio and video products into music, movies and game, and subsequent transformation into a global entertainment leader to Ohga-san's foresight and vision.

I offer my deepest condolences on his passing and pray that he may rest in peace."

Mr. Ohga was a student at the Faculty of Music of the Tokyo National University of Fine Arts and Music (now Tokyo University of the Arts) when he first met Sony founders Masaru Ibuka and Akio Morita. Sony's founders immediately sensed in Mr. Ohga the makings of a leader, and someone whose expert knowledge of sound and electrical engineering would benefit the company greatly. Therefore, in 1953, while still a student, Mr. Ohga was appointed a consultant and advisor to Tokyo Telecommunications Engineering Corporation (now Sony Corporation) before fully entering the Company in 1959.

After joining Sony, Mr. Ohga worked tirelessly to enhance product quality, functionality and design, while also revolutionizing the Company's marketing and advertising initiatives, paving the way for the launch of a succession of innovative and game-changing products. Mr. Ohga passionately advocated the creation of products that would be "attractive in the eyes of consumers", a philosophy that came to represent the principles of Sony's approach to design and engineering, and was key to the Company's worldwide success and growth.

Mr. Ohga, together with Mr. Morita, shared a deep understanding of the importance of brand management, and together they took every opportunity to remind employees to think first and act later, emphasizing that every one of their decisions had an impact on the Sony brand. One of Mr. Ohga's favorite expressions was, "The four letters of the 'SONY' brand are our greatest asset." His efforts to spread the spirit of that message among every Sony employee were critical to enabling Sony to become the globally recognized brand it is today.

Mr. Ohga was also a man of vision and foresight. Anticipating the future potential of compact optical disc formats, he personally drove Sony's initiatives to explore this new frontier. During the development of the CD, it was Mr. Ohga's instincts as a trained musician that led him to push for a 12 centimeter format, providing sufficient recording capacity at 75 minutes to enable listeners to enjoy all of Beethoven's Ninth Symphony without interruption. These negotiations resulted in the CD specifications still in use today. After Sony commercialized the world's first CD in 1982, sales grew rapidly, and by 1987, CDs had overtaken LP record sales in Japan, changing the way people listened to music. Mr. Ohga's efforts to establish the CD format also contributed to the launch of subsequent optical disc formats such as the MD, CD-ROM and the DVD, which not only revolutionized the consumer electronics and music recording industries, but also other areas of technology, such as computer memory and game software.

"Hardware and software are two wheels on a car"

Driven by his philosophy that "hardware and software are two wheels on a car", Mr. Ohga also led Sony's negotiations with CBS Corp, resulting in the establishment of CBS/Sony Records Inc. (now Sony Music Entertainment Inc.) in 1968. Taking an entirely new approach to record label management, which included the record company identifying and nurturing new artists itself, Mr. Ohga successfully grew CBS/Sony into a market leader that by 1978 - only ten years after its establishment - led the industry in both annual sales and profit.

Mr. Ohga continued to push the boundaries of Sony's content strategy, venturing beyond music into motion pictures, with the purchase of Columbia Pictures in 1989. With this acquisition, the foundations for Sony's evolution into a comprehensive entertainment company were now firmly in place.

Mr. Ohga also presided over the launch of Sony's game business. The establishment of Sony Computer Entertainment in 1993 and subsequent worldwide success of "PlayStation" quickly secured Sony's position at the forefront of this industry.

Mr. Ohga was also actively involved in a number of industrial and commercial organizations, promoting both domestic Japanese and global economic development. As Chairman of the Japan Electronics and Information Technology Industries Association (JEITA), he helped to bring discussions surrounding the decade-long U.S.-Japan Semiconductor Trade Agreement of 1986 to an amicable conclusion in 1996. In 1998 he was appointed Vice Chairman of the Japan Business Federation (Nippon Keidanren), where he served as Chairman of the Committee on Administrative Reform, and later as Chairman of the Committee on New Business Development, contributing to Japan's economic development. Furthermore, as Vice Chairman of the Tokyo Chamber of Commerce and Industry he not only led initiatives to stimulate Japanese industrial development and local economic growth, but also sought to redefine the Chamber's role by promoting closer cooperation between large and mid-to-small-sized corporations, and by providing a forum to oversee the creation and development of new industries.

Throughout his career, Mr. Ohga also remained true to his calling as a trained musician, tirelessly devoting his energy to providing a solid financial base for the struggling classical music industry in Japan. He rescued the Japan Music Art Promotion (JMARP) institution which was facing the threat of closure, and was subsequently appointed Director. The organization was renamed Sony Music Foundation, and embarked on a range of new initiatives, including assisting the development of aspiring young musicians, and supporting various concerts and musical events to promote the growth of classical music as an art form.

Mr. Ohga received national recognition in 1988 when he was presented with the Japanese Medal of Honor with Blue Ribbon, and in 2001 when he was presented with the Grand Cordon of the Order of the Sacred Treasure. Nations around the world have also recognized Mr. Ohga's achievements, with France presenting him the country's highest decoration - the Legion of Honour - and Germany, Italy and Austria also bestowing Mr. Ohga with national awards of honor.
In this article: breaking news, dead, died, dies, Norio Ohga, NorioOhga, obit, obituary, Ohga, passed away, PassedAway, Sony, Sony Computer Entertainment, Sony Music, Sony Pictures, SonyComputerEntertainment, SonyMusic, SonyPictures
All products recommended by Engadget are selected by our editorial team, independent of our parent company. Some of our stories include affiliate links. If you buy something through one of these links, we may earn an affiliate commission.
Share
Tweet
Share