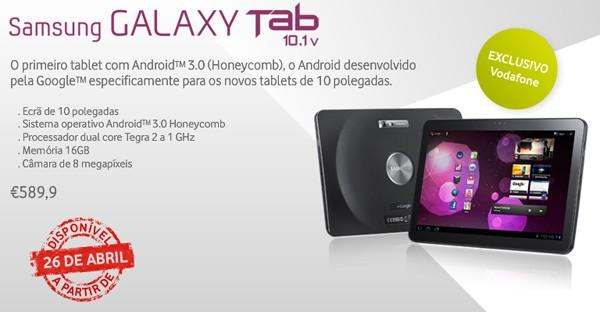 Some lucky Aussies might have been able to pre-order the Samsung Galaxy Tab 10.1v ahead of the rest of the world, but it turns out the Portuguese will actually be taking this Honeycomb tablet home first, starting tomorrow. Originally known as the Galaxy Tab 10.1 but quickly superseded by a slimmer, impending model, said transitional device is now listed on Vodafone Portugal's website with a more delightful €589.90 ($860, which is no doubt off-contract) tag to go with its HSPA+ radio, along with a big red "available from April 26th" stamp. We dug through Vodafone's other European sites and the only country that also mentions this Tegra 2 slate is the Netherlands, though it only indicates a "week 17" launch -- in other words, any time between now and May 1st. If you're in Europe and don't mind this slightly out-of-date whopper, be sure to check back as we'll be keeping our eyes peeled for more details.