K. Wong
@kevinmwong
April 27th, 2011
In this article: 1080p, 1080p 24fps, 1080p 30fps, 1080p24fps, 1080p30fps, 5100, 7000, auto focus video, AutoFocusVideo, Camera, Cameras, color, Color sketch, color sktech, colorsketch, D3100, d5100, D7000, Digital, Digital camera, digital slr, DigitalCamera, DigitalSlr, effects, hands-on, HandsOn, HDR, hdr photos, HdrPhotos, head to head, HeadToHead, high dynamic range, high iso, HighDynamicRange, HighIso, impressions, iso, night, night vision, NightVision, nikon, Nikon D5100, Nikon D7000, NikonD5100, NikonD7000, review, sketch, t3, t3i, unboxing, video, vision
Nikon has stirred up the camera crowds once again with its newly released D5100, filling the industry with the buzz of a new high-resolution articulating screen. In terms of consumer DSLR options, the D5100 has taken on the role of the mid-range model in Nikon's product line between the D3100 and the D7000 and we think it assumes the part rather nicely. In terms of price, the D5100 fits right in as well, fetching an MSRP of $900 (vs. $700 and $1600, respectively for the two aforementioned camera kits). Of course, the D7000 lands you the better 18-105 f/3.5-5.6G ED AF-S VR lens, a larger and brighter viewfinder, built-in focus motor, weather-proof sealing, and a few other internal upgrades. But don't judge too quickly, because we've had some time to play with Nikon's latest creation and the D5100 can certainly shoot along with the big boys of consumer cameras -- read on past the break for our impressions and comparisons with the D7000.
%Gallery-121549%
Nikon
0
SCORE
Engadget
N/A
Critics
6 reviews
82
Users
21 reviews
87 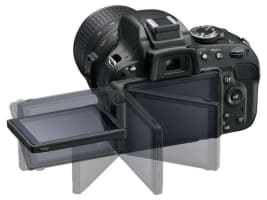 To the untrained eye, the D5100's body seems pretty mundane compared to its predecessor (or any other DSLR for that matter) but whip out its articulating screen and you'll find that it swings out the left side of the camera. The new model is about 10% smaller and lighter than the D5000 – while 30 grams isn't a whole lot on paper, we sure do appreciate it after a day of walking around town with the D5100. The grip also has been redesigned slightly and we have to say that despite this camera being on the small side, the new grip still makes it extremely comfortable to hold while shooting due to its shape and material. You'll also notice that then entire button layout has been shifted over to the right to accommodate that new flippy screen, allowing full access to the camera's functions with one's right hand. Still plaguing the D5xxx models is their plasticky-ness, but this flaw is neither surprising nor unwarranted for the price range – it's just a constant reminder that you're still in the amateur and novice section of digital SLRs.


That said, we're still impressed with the overall feel and design of the D5100. One glaring problem with the D5100 is the location of both the live view toggle (directly to the right of the mode dial) and the movie record button, which finds itself placed near the shutter. We're big fans of the way Nikon did the D3100 and the D7000's Live View layout on the back of the camera, combining both the Live View dial with the record button into a conveniently placed, single sleek switch, but unfortunately we can't say the same for the D5100. It's just so easy to toggle live view on the either the D3100 or the D7000 by just slightly moving our thumbs in natural opposable motions. The D5100 however, requires the photographer to move their entire hand to toggle live view, not to mention that in order to hit record, you have to use your shutter finger -- this is a disaster when trying to maintain framing or take photos while recording movies.

Like the model it's replacing, the hallmark feature of the D5100 is its articulating screen, and rightfully so. As the company's second DSLR with a movable screen, Nikon has listened to the criticism from D5000 users – mainly that it could not be used effectively when attached to a tripod due to its downward position; therefore, Nikon has followed its Canon rivals and placed the screen to the left -- now users can mount the camera on a tripod and still have all of the range of the screen as intended. Nikon has increased the screen size, replacing the 2.7-inch screen with a much beloved 3-incher (found on Nikon's previous D90), while quadrupling the resolution, giving it a total of 920,000 dots (versus 230,000 dots on the D5000). Colors are remarkably sharp, brightness is outstanding even in direct sunlight, and the high resolution truly makes it a joy to use in live view mode. The built-in accelerometer, which enables the contents on the display to rotate around as the camera moves laterally, is also carried over from the D5000, and we still find it very useful for situations that call for portrait orientations.

So, is the articulating screen enough of a reason to purchase the D5100? Well, not really... The main reason is that there are plenty of better reasons to own this camera than just that horizontal screen -- it really just sets the D5100 apart from other cameras and lets Nikon sell us another prodigious camera. Like we've mentioned in our D5000 review, the swivel screen is still only useful in a handful of situations – i.e. mainly video recording, or when trying to get awkward shots that you're extending limbs and extremities to get. It does not eliminate the shutter lag from shots in Live View, and often times it makes the camera a lot bigger and more obtrusive if you're working in tight areas (concerts and gardens in our experiences).

The overall execution of the screen on Nikon's part is still very, very impressive. The hinge glides and moves as if on rails. The screen locks into position and is very stable at all viewing angles. Combined with Nikon's new auto focus system that is extremely welcomed when shooting video, the D5100 shines for amateur cinematographers – which definitively fills the void we missed with the D5000, as we'll explore in just a moment.

While the D5100 and D7000 share the same sensor, that's pretty much where the similarities end. The D7000 has 39 auto focus points, nine of which are cross types, where as the D5100 has only 11 points, and has a single lonely cross type. The viewfinder is also about half as small, and darker in the D5100 – this is really only noticeable if you are shooting with the two side by side, but for the hardcore Nikonians, framing from the viewfinder is key. That said, the overall image quality of the D5100 isn't too dissimilar to that of the D7000. In most situations, particularly for DSLR newbies, the D5100's image quality is more than adequate and will still have that wow-factor in sharpness and depth of field control. In the test image above, both the D5100 (left) and the D7000 (right) had the 18-55mm f/3.5-5.6 VR kit lens attached, and were shooting at 6400 ISO speeds. We found that the high ISO performance of the D5100 fantastic, and were generally pleasantly surprised when shooting above 1600 ISO speeds (where we found lots of noise in shot taken by the D5000). For $900, the D5100 certainly holds its own against the D7000 and other models in the DSLR market. Don't just take our word from it, Check out the sample images in our mini-trip to Battery Park.
%Gallery-122044%

The D5100 also includes an effects mode, which you can toggle on the main mode dial on top of the camera. One particular effect that Nikon placed a heavy focus on was the night vision mode, where the camera would shoot at a ridiculous 102,400 ISO speed. We initially thought night vision on an mid-range consumer DSLR to be pretty gimmicky, but after testing, we found that it actually works – if you're the black and white, with lots of grainy noise type of person -- check em out in our sample image gallery. The coolness of night vision aside, we found ourselves more drawn to another effects which Nikon included like the miniature effect (provides tilt-shift like images), the selective color effect and our favorite, the color sketch effect (image below).

Also worth noting is that the Nikon D5100 also includes a built in HDR (High Dynamic Range) mode, where the Camera shoots two images sequentially at two different exposures, then merges the images to create a single photo that brings details to both the shadows and the highlights of the picture (example below).

Nikon just kept the ball rolling with the upgrades from the D5000, as we come to one of the biggest and most noticeable ones: video. After Nikon had released the D3100 and the D7000, both having 1080p 24fps video capabilities, it was only natural to assume that the D5100 would follow. Well, Nikon took it one step further, including 1080p at 30fps, which is sorely missed especially on the D7000, and gone is the five minute video cap we despised in the D5000.


We are extremely happy and surprised with the D5100's video capabilities. Coupled with an articulating screen, "full time" auto focus, and the aforementioned effects to play with, we can't help but to think that a lot of people are gonna get their 'creative' on with this camera. We do have to say that video auto focus, like the D3100, doesn't work all the time, often missing when tracking subjects, and if accompanied with non-silent motor lenses (like some third-party that Tamron and Sigma lenses offer), the resulting videos tend to have rather annoying audio. We unfortunately did not get a chance to test the Nikon ME-1 microphone with the D5100 during our time with it, but look forward to other users' reactions and reviews of its performance.

So, is the D5100 worth it for previous owners of the D5000 and new buyers alike? Well, unless you have the green to pony up the $900 (kit)/ $800 (body only), the $600 D3100's similar feel and performance might steer you to go the cheaper route. We are still anxiously waiting to get our hands on a Rebel T3i, Canon's direct competitor to the D5100 so we can definitively answer the old Canon / Nikon question, but we're fairly confident that the D5100 can hold its own against its counterpart. With that said, the older D5000 is still a very capable model (especially with reduced pricing), but the D5100 decisively takes the reigns with it's 1080p video capabilities, great image quality, high ISO noise performance and high-res articulating screen.

Would we recommend this over the outgoing D90? Of course. You are getting a D7000, with a better screen, better video performance in a less weather-sealed, but lighter and smaller body for around the same price. Would we recommend this over the D7000? Well, it really depends on your needs, but realistically, if money was no object, we'd scream D7000 every time. If you need something to snap a few shots of your kids on the playground, and record a birthday song or two in high definition, then the D5100 will do your memories justice. If you're thinking about getting serious about photography, and doing some portraits and or landscapes for some dough, then you'll appreciate the D7000's weather sealing, built-in auto focus motor (so you can use lenses dating back to the 70's), top mounted LCD and a far superior kit lens (if you're the kit type of person). Either way, the D5100 is a winner in our books, especially for the price.
All products recommended by Engadget are selected by our editorial team, independent of our parent company. Some of our stories include affiliate links. If you buy something through one of these links, we may earn an affiliate commission.