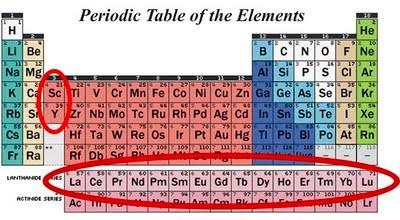 It looks like rare earth elements are getting slightly less rare. According to a research note released by Goldman Sachs today, the world's rare earth supply deficit will probably reach its apex this year, before converting into a surplus by 2013. Goldman's analysts constructed their projections based on evidence that many Western companies have begun building their own mines, in response to China's overwhelming market dominance. Today, the People's Republic produces about 90-percent of the world's rare earth minerals -- a group of 17 elements that are used to manufacture many of the flat screen TVs, hybrids and cellphones we've come to know and love. Over the course of the past few years, China has only consolidated its hold on the industry, thanks to economic policies aimed at nationalizing private mines and implementing restrictive export quotas. As a result, global rare earth prices have skyrocketed, forcing mining companies in the US and elsewhere to look inward and harvest their own deposits. The only downside, however, is that even if global supply spills into a surplus within the next two years, prices probably won't cool down until 2015. But at least the horizon looks brighter than it has in recent months.
In this article: business, cellphone, china, deficit, deposit, Economics, Element, export quota, ExportQuota, exports, flat screen TVs, FlatScreenTvs, hybrid, Imports, industry, manufacturing, minerals, mining, price, quota, rare earth minerals, RareEarthMinerals, supply, supply deficit, SupplyDeficit, surplus, trade
All products recommended by Engadget are selected by our editorial team, independent of our parent company. Some of our stories include affiliate links. If you buy something through one of these links, we may earn an affiliate commission.
Share
Tweet
Share