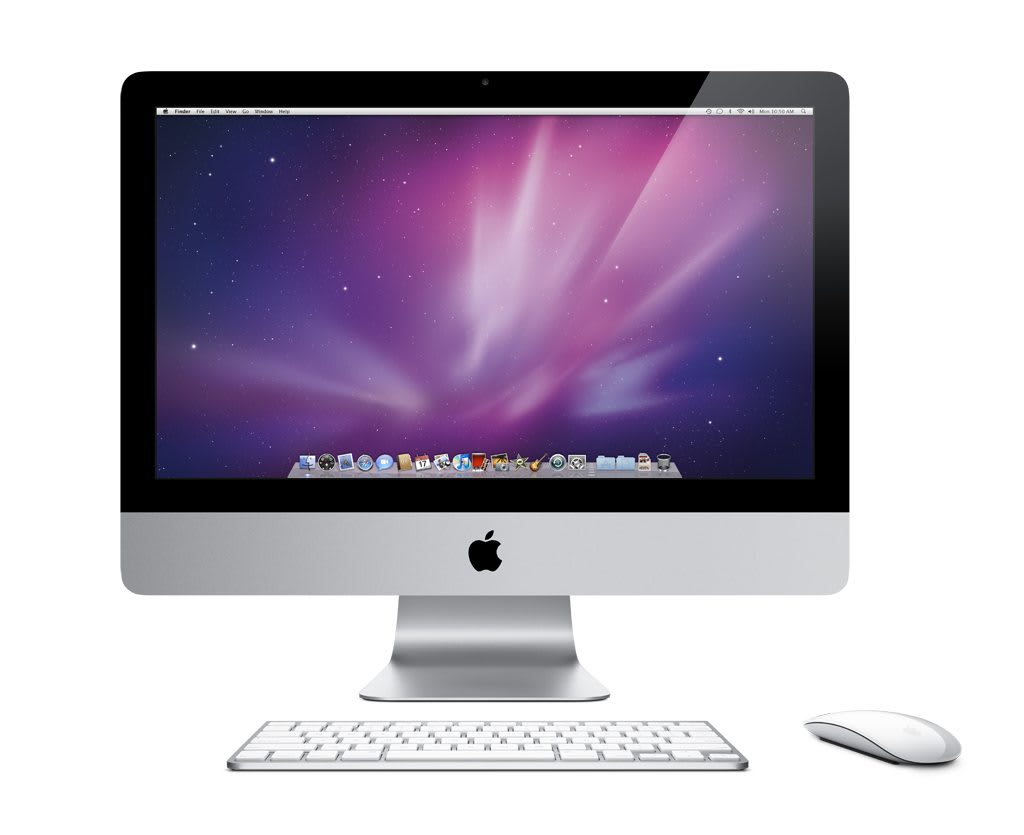 The heaviest of heavyweights in the all-in-one field has seen another update, another batch of new internals to liven up the aging (but still classy) chassis. Apple unveiled its latest iMac refresh last week, surprising nobody with a new selection of AMD Radeon HD graphics cards, quad-core Intel Sandy Bridge processors, and solid-state storage options, all designed to do one thing: go faster.

These latest iMacs are quite naturally the speediest yet, as you'd expect, but with the right configuration they can be properly quick. Faster internals plus Thunderbolt ports on the outside turn what's supposed to be a family-friendly and eye-catching machine into an unassuming powerhouse that might just be quick enough for professional users. There's a more important question, though: is this $1,999 system the right choice for you?

How would you rate the iMac 21.5-inch (mid 2011)?
We want to hear what you think. Post a quick review now to join the conversation!
Write a review

When Apple refreshed the iMac lineup last year we sampled the 21.5-inch model, svelte and sweet and a good choice for your average household. This time we moved up to the full 27-inch size, sporting a Core i5 processor that hums along at 3.1GHz. This is the processor you get if you opt for the pricier configuration of the bigger model and resist the urge to make any other customizations -- but cycle-hungry users can spend an extra $200 to step into a 3.4GHz Core i7.

Either way you get four cores, ours came paired with 4GB of 1333MHz, DDR3 RAM, installed as two 2GB DIMMs, and a 1TB 7,200RPM, SATA drive. Pushing pixels to that 27-inch, 2,560 x 1,440 resolution IPS panel is an AMD Radeon HD 6970M graphics card with 1GB of GDDR5 memory. That, thanks to the dual Thunderbolt ports tucked around the back, gives users a new-found ability to power a lot of external displays, in theory up to four thanks to the dual-channel nature of each port. We managed to get two additional displays lit up, but the LED-backlit monitor here is more than spacious enough for most use, and is certainly bright and gorgeous enough too -- but you knew that.

In fact you probably already know a lot about how this looks because, other than the faster internals, there isn't a lot new here. It's the same design that Apple's been hawking for a few years now. It still looks good, modern and understated styling matching your modern and understated life, but we're left wanting some updates. That SD card slot is still dangerously close to the DVD-ROM slot (which still won't accept Blu-ray discs), and the power button is still in exactly the right spot to confound new users and frustrate experienced ones as they accidentally hit it every time they reach to tilt the display back.

And we can't help but wish we could get a little more interactive with that hyper-glossy display, which makes for a heck of a good mirror when turned off. Apple of course has patents out for what looks like a touchable iMac and we're a bit disappointed they didn't come to fruition here -- though we would hate to smudge up that surface. There's still no matte option, but at least you can opt out of getting a Magic Mouse and substitute in a Magic Trackpad this time.

Oh, and there's a new FaceTime HD webcam stuck in the bezel, for those about to chat.

This machine has the higher of the two default configurations for the 27-incher, and we found it more than adequate for just about anything we threw at it. Obviously the gaming selection is still a little limited here, but Half-Life 2 and Portal 2 played full-res without a hitch. As you'd expect a 1080p clip loads quickly and cycles just fine -- we had five simultaneous 1080p clips going without a hint of frame drop on any.

In fact about the only the only thing that really caused a stutter was trying to edit a 4K video clip in REDCINE -- it was still workable, but we had to view it at half-res to get the preview render looking smooth. Hardly a deal-breaker. If you're looking for more synthetic benchmarks, we scored 8,465 in Geekbench, a 30-second 720p clip exported from iMovie in 20 seconds, and a 1080p clip took under a minute.

So could a pro-level user, someone who spends their days in Photoshop or Premiere or even REDCINE be happy here? Yes, surprisingly, they could -- especially with the addition of an internal SSD (a $500 option for 256GB) and a high-speed external storage array connected via Thunderbolt. It wouldn't be our choice, and whether it makes sense to buy something like this versus a dedicated machine with an external display is another question entirely, but if you wanted to, you certainly could.

However, for a general consumer setup we can't help but think this is a bit too much. The vastly more affordable and still hugely capable 21.5-inch model makes a lot more sense for a lot more people. But, for ease of setup, aesthetic appeal, and overall performance and flexibility, the iMac is as hard to ignore as ever.
In this article: 27-inch, 6970M, amd, AMD Radeon HD 6970M, AmdRadeonHd6970m, apple, core i5, CoreI5, engadget awards, engadget awards 2011, EngadgetAwards, EngadgetAwards2011, facetime, facetime hd, FacetimeHd, feature, featured, features, imac, intel, radeon, radeon hd, RadeonHd, review, sandy bridge, SandyBridge
All products recommended by Engadget are selected by our editorial team, independent of our parent company. Some of our stories include affiliate links. If you buy something through one of these links, we may earn an affiliate commission.
Share
Tweet
Share